Émile Henri Bernard is a French Post-Impressionist painter who had artistic friendships with Van Gogh, Gauguin, Toulouse-Lautrec, & Cézanne. Most of his best work was accomplished at a young age, in the years 1886 - 1900, and that is what I will show here.  But, as important  his work are his friendships & discussions with other artists.  A letter to him from van Gogh written in June of 1888, is shown below.

Forgive me if I write in great haste; I fear that my letter won't be at all legible, but I want to reply to you right away.

"Do you know that we've been very foolish, Gauguin, you, and I, in not all going to the same place? But when Gauguin left, I wasn't yet sure of being able to leave. And when you left, there was that dreadful money for the fare, and the bad news I had to give about the expenses here, which prevented it. If we had all left for here together it wouldn't have been so foolish, because the three of us would have done our own housekeeping. And now that I've found my bearings a little more, I'm beginning to see the advantages here. For myself, I'm in better health here than in the north—I even work in the wheat fields at midday, in the full heat of the sun, without any shade whatever, and there you are, I revel in it like a cicada. My God, if only I had known this country at twenty-five, instead of coming here at thirty-five—In those days I was enthusiastic about gray, or rather, absence of color. I was always dreaming about Millet, and then I had acquaintances in the category of painters like Mauve, Israëls. Here's sketch of a sower. 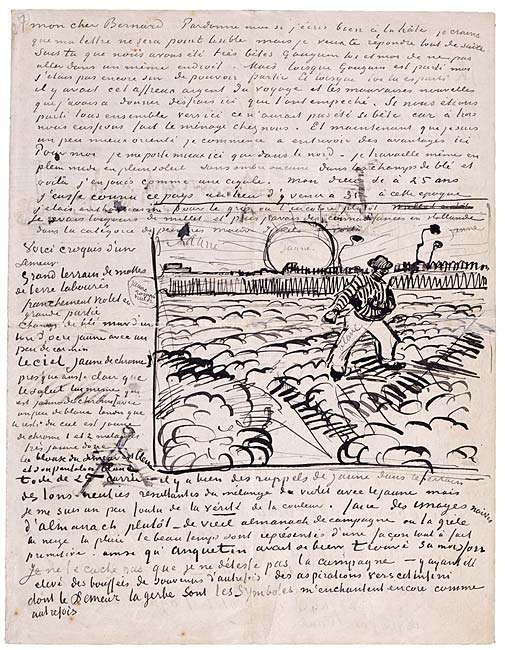 "Field of ripe wheat in a yellow ocher tone with a little crimson.

"The sower's smock is blue, and his trousers white. Square no. 25 canvas. There are many repetitions of yellow in the earth, neutral tones, resulting from the mixing of violet with yellow, but I could hardly give a damn about the veracity of the color. Better to make naive almanac pictures—old country almanacs, where hail, snow, rain, fine weather are represented in an utterly primitive way. The way Anquetin got his Harvest so well.

"I don't hide from you that I don't detest the countryside—having been brought up there, snatches of memories from past times, yearnings for that infinite of which the sower, the sheaf, are the symbols, still enchant me as before.

"I don't hide from you that I don't detest the countryside—having been brought up there, snatches of memories from past times, yearnings for that infinite of which the sower, the sheaf, are the symbols, still enchant me as before.

"But when will I do the starry sky, then, that painting that's always on my mind? Alas, alas, it's just as our excellent pal Cyprien says, in "En ménage" by J. K. Huysmans, the most beautiful paintings are those one dreams of while smoking a pipe in one's bed but which one doesn't make. But it's a matter of attacking them nevertheless, however incompetent one may feel vis-à-vis the ineffable perfections of nature's glorious splendors.

"But how I should like to see the study you did at the brothel. I reproach myself endlessly for not having done figures here yet. Here's another landscape.11 Setting sun? Moonrise? Summer evening, at any rate. 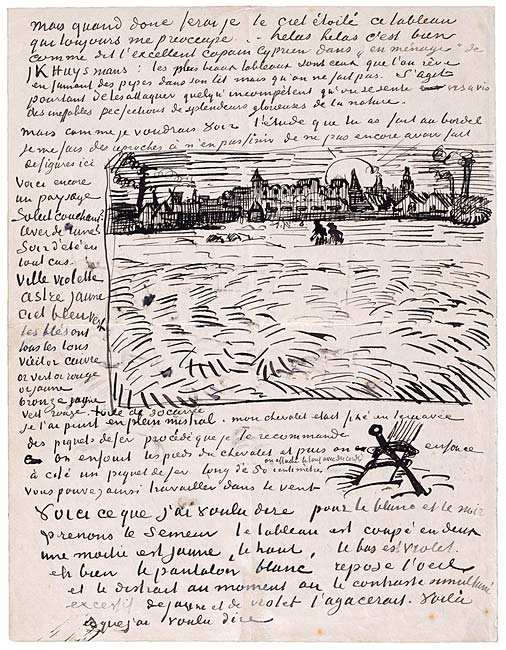 "I painted it out in the mistral. My easel was fixed in the ground with iron pegs, a method that I recommend to you. You shove the feet of the easel in and then you push a 50-centimeter-long iron peg in beside them. You tie everything together with ropes; that way you can work in the wind.

"Here's what I wanted to say about the white and the black. Let's take the Sower. The painting is divided into two; one half is yellow, the top; the bottom is violet. Well, the white trousers rest the eye and distract it just when the excessive simultaneous contrast of yellow and violet would annoy it. That's what I wanted to say.

"I know a second lieutenant of Zouaves here called Milliet. I give him drawing lessons—with my perspective frame—and he's beginning to make drawings—my word, I've seen a lot worse than that, and he's eager to learn; has been to Tonkin, etc. He's leaving for Africa in October. If you were in the Zouaves, he'd take you with him and would guarantee you a wide margin of relative freedom to paint, provided you helped him a little with his own artistic schemes. Could this be of some use to you? If so, let me know as soon as possible.

"Gauguin's bored too in Pont-Aven; complains about isolation, like you. If you went to see him—but I have no idea if he'll stay there, and am inclined to think that he intends to go to Paris. He said that he thought you would have come to Pont-Aven.

"My God, if all three of us were here! You'll tell me it's too far away. Fine, but in winter—because here one can work outside all year round. That's my reason for loving this part of the world, not having to dread the cold so much, which by preventing my blood from circulating prevents me from thinking, from doing anything at all. You can judge that for yourself when you're a soldier. Your melancholy will go away, which may darned well come from the fact that you have too little blood— or spoiled blood, which I don't think, however. It's that bloody filthy Paris wine and the filthy fat of the steaks that do that to you—dear God, I had come to a state in which my own blood was no longer working at all, but literally not at all, as they say. But after 4 weeks down here it got moving again, but, my dear pal, at that same time I had an attack of melancholy like yours, from which I would have suffered as much as you were it not that I welcomed it with great pleasure as a sign that I was going to recover—which happened too.

"Instead of going back to Paris, then, stay out in the country, because you need strength to get through this ordeal of going to Africa properly. Now the more blood, and good blood, that you make yourself beforehand, the better, because over there in the heat it's perhaps harder to produce it. Painting and fucking a lot are not compatible; it weakens the brain, and that's what's really damned annoying.

"The symbol of Saint Luke, the patron of painters, is, as you know, an ox; we must therefore be as patient as an ox if we wish to labor in the artistic field. But bulls are pretty glad not having to work in the filthy business of painting. But what I wanted to say is this. After the period of melancholy you'll be stronger than before, your health will pick up—and you'll find the surrounding nature so beautiful that you'll have no other desire than to paint. I believe that your poetry will also change, in the same way as your painting. After some eccentric things you have succeeded in making some that have an Egyptian calm and a great simplicity.

"How short is the hour
We spend loving—
—It's less than an instant—
—A little more than a dream—:
—Time takes away
—Our spell.

"That's not Baudelaire, I don't even know who it's by, they're the words of a song in Daudet's Le Nabab, that's where I took it from—but doesn't it say the thing like a real Lady's shrug of her shoulder? These last few days I read Pierre Loti's Madame Chrysanthème; it provides interesting remarks about Japan. At the moment my brother has an exhibition of Claude Monet, I'd very much like to see them. Guy de Maupassant, among others, had been there, and said that from now on he would often revisit the boulevard Montmartre.

"I have to go and paint, so I'll finish—I'll probably write to you again before long. I beg a thousand pardons for not having put enough stamps on the letter, and yet I did stamp it at the post office and this isn't the first time that it's happened here, that when in doubt, and asking at the post office itself, I've been misled about the postage.

"You can't imagine the carelessness, the nonchalance of the people here. Anyway, you'll see that shortly with your own eyes in Africa. Thanks for your letter, I hope to write to you soon at a moment when I'm in less of a hurry. Handshake,   Ever yours,  Vincent "