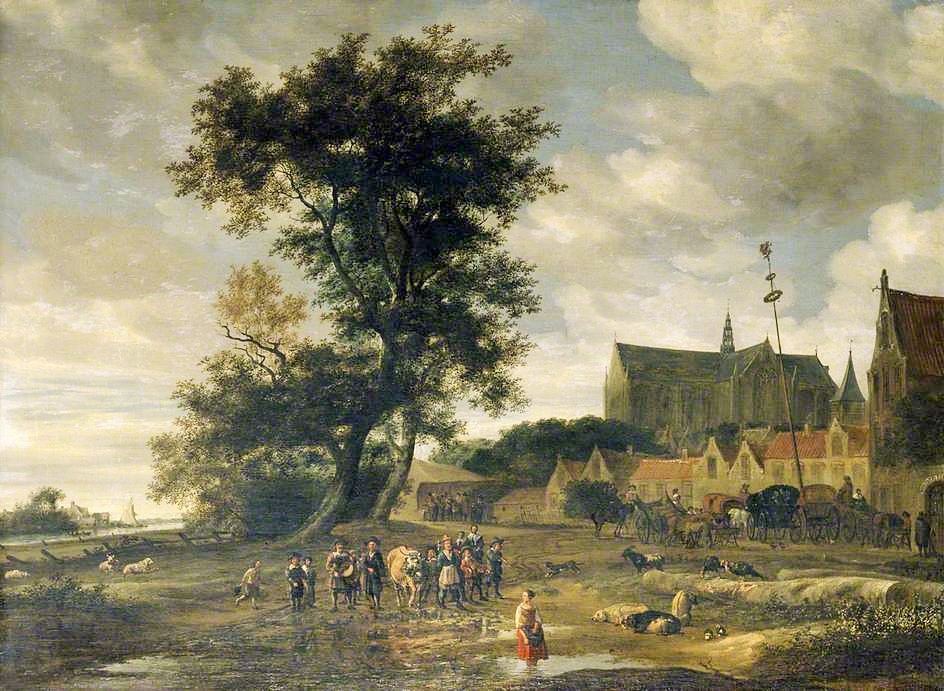 1669 Scene before a Maypole with Alkmaar Church in the Background by Salomon van Ruysdael (Dutch Landscape Painter, 1600-1670)

May Day, usually the 1st of May, celebrates the onset of summer, the height of Spring, & the flowering of life. The ancient European festival of spring, Beltane, features a goddess which manifests as the May Queen & Flora. A god also emerges as the May King & Jack in the Green. In ancient European festivals of spring, Beltane, the dance around the Maypole represents their unity with the pole itself being the God & the ribbons that encompass it, the Goddess. Mayday is a festival of flowers, fertility, sensuality, & delight.

Some festival celebrants believed that on May Eve, you could bless your garden in by making love there with your partner. Union with the land was a May 1 focus, often with actual mating outside on other lands to bless fields, herds, home. Revellers welcomed May at dawn with singing & dancing. Later communities celebtated with Morris Dancers & more formal pageants featuring Jack-in-Green& a May Queen to awaken the fertility in the Land.

In ancient springtimes, gathering & exchanging of Flowers & Greens was common on May Eve. Merrymakers decorated homes, barns, & other buildings with green budding branches. Men & women made garlands & wreaths of Flowers & Greens. Early communities prepared a May basket by filling it with flowers & goodwill & then giving it to someone in need of healing & caring. Women in early cultures formed wreaths of freshly picked flowers to wear in the hair to radiate joy & beauty. Early groups often danced the Maypole to feel the balancing of the Divine Female & Male within.

In Pagan Rome, Floralia, from April 27-May 3 was the festival of the Flower Goddess Flora & the flowering of Springtime. Roman Catholic traditions of adoring statues of Mary with garlands of flowers on May 1 have Roman Pagan roots. On May 1, offerings were made to Bona Dea (as Mother Earth), the Lares (household guardian spirits), & Maia (Goddess of Increase) from whom May gets its name. On May 1, early cultures followed a pastoral tradition of turning sheep, cows, other livestock out to pasture. In early Scandinavia, mock battles between Winter & Summer were enacted at this time. Maypoles in Spain sometimes were topped with a male effigy which was later burned. In Germany, Fir trees were cut on May Eve by young unmarried men, branches removed, decorated, put up in village square, & guarded all night until dance occurred on May Day. In England, permanent Maypoles sometimes were erected on village greens. In some villages, there also were smaller Maypoles in the yards of households.

Fire is a common accompaniment to many May celebrations. Celebrants mark the holiday by lighting fires, dancing, feasting & often performing fertility rites. Many built a bonfire & then moved through it or danced clockwise around it. Livestock was driven around a Beltane fire or between 2 fires for purification & fertility blessings. In ancient times Druid priests kindled it at sacred places. In later times, Christian priests kindled their spring fires in fields near the church after peforming a Christian church service. Branches & twigs often were carried around these fire 3 times, then hung over hearths to bless homes.  Risk-takers made a wish for good luck before jumping a bonfire or the flame of a candle. Some believe during May the veil between the human & supernatural worlds is at its thinnest, making them potent days for magic. Beltane may refer to the “fires of Bel,” in honor of the Celtic sun god, Belenus. Some pagans believe fire has the power to cleanse, purify & increase fertility.
at 4:30 AM