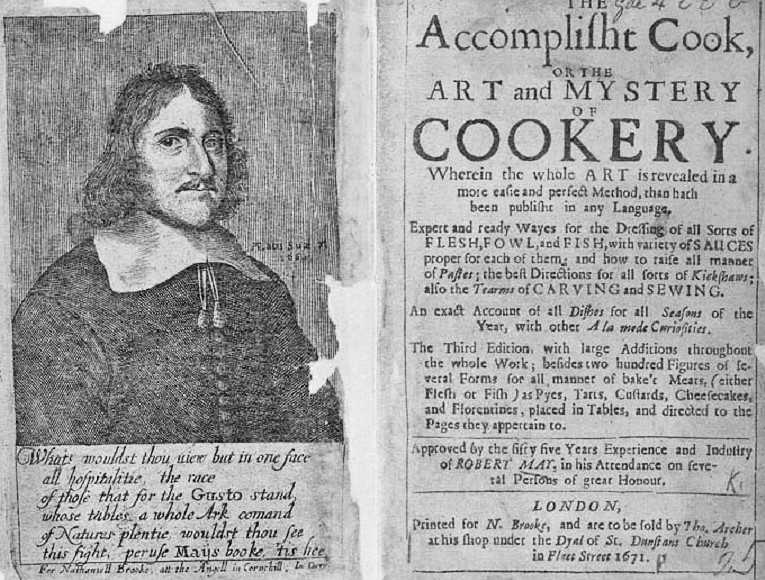 Robert May (1588–c 1664) was an English professional chef who trained in France & worked in England. He is best known for writing & publishing the 1660 cookbook The Accomplisht Cook. May was born in Wing, Buckinghamshire to Edwarde & Joan Mayes in 1588. His father worked at Ascott Park as the chief cook to the Dormer family.

At age 10, May was sent to Paris by Lady Dormer—where he trained for 5 years to become a chef. Following his training, he served his apprenticeship in London, working for Arthur Hollinsworth (cook to the Grocer's Hall & Star Chamber). After his apprenticeship, May returned to Wing & became one of the 5 cooks reporting to his father at Ascott Park.

In the mid-1630s Sir Anthony Browne employed May to be the chef at his country estate (Cowdray House) in west Sussex. May was Catholic & worked for a total of 13 households of minor English nobility (including many aristocratic Catholic families) until the English Civil War (1642–1651).

Following the English Civil War, May wrote & published The Accomplisht Cook which he subtitled Or the Art & Mystery of Cooking. The work was 1st published in 1660, & the last revision made during the author's lifetime was published in 1665. The 1685 edition of the work (at least its 5th) contains about 300 pages. May's work is considered to be the 1st major recipe book to be published in England. Prior to this, most cooks carefully guarded the secrets of their profession.
at 4:02 AM