Martin Luther nails up his 95 theses on the cathedral door - the act that started the Reformation. Illustration from Martin Luther by Gustav Freytag, published by The Open Court Publishing Company, 1897

On October 31, 1517, when Martin Luther posted his 95 theses on the church door in Wittenberg. This date is marked by some as the beginning of the Protestant Reformation. The rise of Protestantism throughout Europe – spread by the teachings of Luther, John Calvin & John Knox, among others – had a profound effect upon the veneration of Saint Nicholas. Protestant teachings emphasizing personal responsibility in salvation – prayer, bible studies, good works – lead to a diminishing of the importance of the Catholic saints. The Puritan movement was one off-shoot of this profound change.

As a result, Christians throughout Europe stopped venerating Saint Nicholas Indeed, Puritans in England & some of the New England British American colonies passed laws to abolish the celebration of Christmas for a time – it was to be a working day like any other. 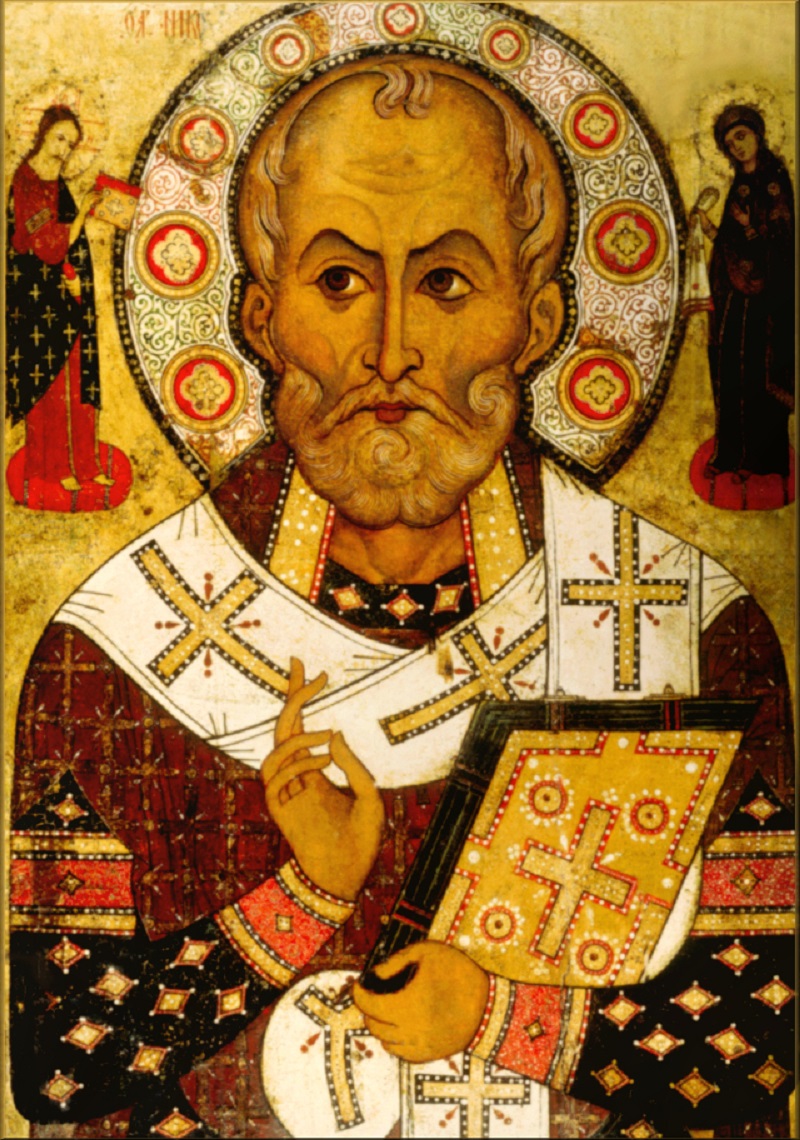 But Christmas – & Saint Nicholas – would not be legislated out of existence. Although the feasting & veneration of Catholic saints were banned, people had become accustomed to the annual visit from their gift-giving saint & didn't want to forget the joys of the holiday. So in some European countries, the festivities of St. Nicholas' Day were merged with Christmas celebrations, & although the gift-bearer took on new, non-religious forms, he still reflected the saint’s generous spirit.

In England, they favored Father Christmas, who was not related to the church. He evolved out of the Roman god Saturn, who was worshipped in England after the Romans invaded in AD 43. In 600, the Saxons which invaded & settled Britain had the custom of giving human characteristics to the weather elements, welcoming the characters of King or Lord Frost, Lord Snow etc. to their homes in the hopes that the elements would look kindly on them. They would dress an actor in a pointed cap & cloak or cape, & drape him with Ivy, bringing him into their midst, & bidding him join their feast. He was to represent the Season, & would be treated with all respect, & drink toasts to him.

In 800, the Vikings brought with them their beliefs in the Northern deities & Elementals, & their main god Odin, who in the guise of his December character came to earth dressed in a hooded cloak, to sit & listen to his people & see if they are contented or not. It was said that he carried a satchel full of bounty which he distributed to the needy or worthy. He was portrayed as a Sage with long white beard & hair.) Father Christmas was portrayed as a large man who wore a scarlet robe lined with fur & a crown of holly, ivy, or mistletoe.

Ben Jonson's play, Christmas, his Masque, was 1st presented at the Court of King James in 1616. Here, Christmas is represented by an actor, & was described as being attired "... in round Hose, long Stockings, a close Doublet, a high crownd Hat with a Broach, a long thin beard, a Truncheon, little Ruffes, white Shoes, his Scarffes, and Garters tyed crosse, and his Drum beaten before him."

But in 1645, Christmas was banned in England by Cromwell’s Long Parliament & the Puritans, & the traditional mummers plays were visited by Father Christmas, rather than Saint Nicholas, who issued a taunting challenge to the government. "In comes I, Old Father Christmas, Be I welcome or be I not, I hope that Christmas will ne'er be forgot." A Broadsheet appeared in 1645 on the streets of London, taunting the Government by a humorous political 'scandal' about the conviction & imprisonment of Christmas, & the Hue & Cry after his escape therefrom.

In England the Puritans could not end customs of St. Nicholas’ feast day, however stringently legislated against. However, the Puritans caused significant disruptions of traditions. John Evelyn wrote in his diary on 25 December 1652 (& also in 1653): "Christmas Day, no sermon anywhere, no church being permitted to open, so observed it at home." 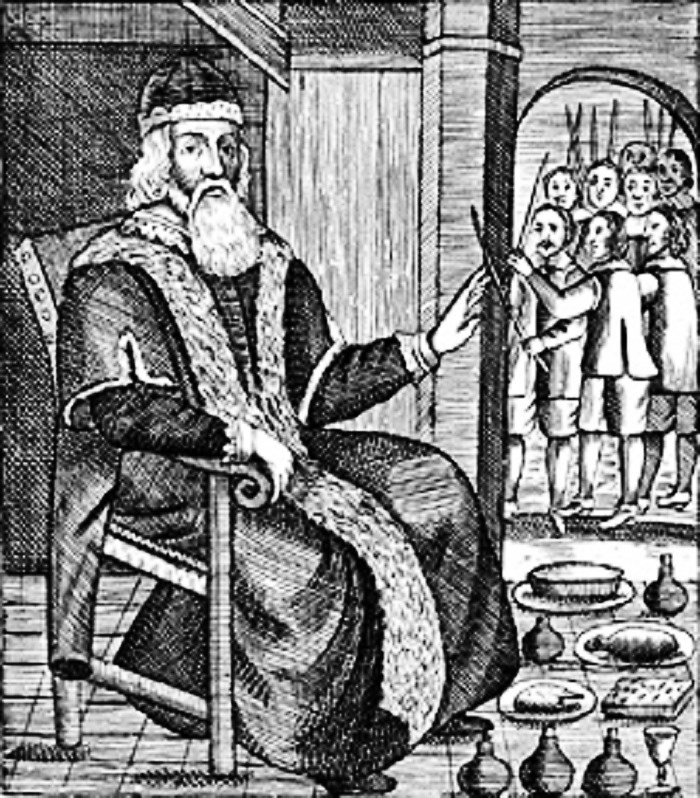 Excerpt from Josiah King's The Examination and Tryal of Father Christmas (1686), published shortly after Christmas was reinstated as a holy day in England. The following declarationappeared at the bottom of this woodcut.
Behold the Majestie and grace!
Of loveing, cheerfull, Christmas face.
Whome many thousnads, with one breath:
Cry out, let him be put to death.
Who indeede can never die:
So long as man hath memory.

The return to the throne of Charles II in 1660 restored the holiday. In 1678, a book was published in London entitled The Examination & Tryal of Old Father Christmas. Not surprisingly, Old Saint Nick was exonerated.

From the 17C-19C, the country mummers plays which kept Father Christmas alive in Britain. With the 'cleansing' of religious popery, it is interesting to note that the saintly bishop was replaced by the half pagan impersonation of the Element or Season of Christmas. The transformation of Saint Nicholas into Father Christmas occurred 1st in England, then in countries where the Reformed Churches were in the majority, & finally in France, the feast day being celebrated on Christmas or New Year's Day, rather than the traditional December 6. 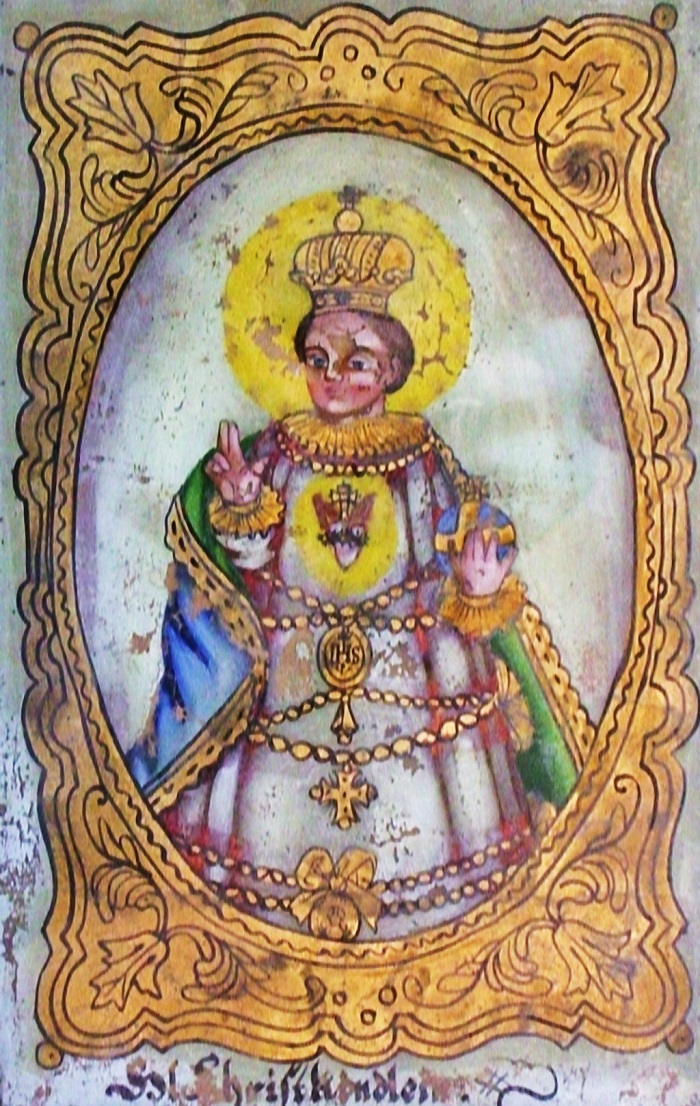 In Germany, Martin Luther sought to reemphasize the position of Christ, & promoted the Christ Child — the "Christ Kindlein" – as the Gift Giver (which eventually became Kris Kringle). The Christkindlein was often portrayed by a fair-haired young girl.

In these traditions, Saint Nicholas became the assistant to the Christkindlein. He was called Weihnachtsmann (Christmas Man), Schimmelreiter (Rider of the White Horse), or under a number of other guises, including:
Ru Klaus (meaning Rough Nicholas - so named because of his rugged appearance),
Aschen Klaus or Ashenclos (meaning Ash Nicholas - because he carried a sack of ashes as well as a bundle of switches)
Pelze Nicol or Pelznickle (meaning Furry Nicholas - referring to his fur clad appearance). This was the Nicholas that illustrator Thomas Nast drew upon when drawing his famous series of Santa Claus illustrations in the late 19th Century.
Belsnickle or Buller Clos (Nicholas with bells).

In some regions of Germany, Saint Nicholas – in any of a number of guises – remained the gift giver, accompanied by a servant named Knecht Rupprecht (Servant Rupert, dressed in ragged clothes, with fur, a mask, a blackened face); in Luxembourg, the servant was called Hoesacker. This servant was often a fearsome character, & came with a sack on his back & a rod or switch in his hand. It is the helper who keeps track of who was good & who was naughty. And again it was not only his duty to reward good children, but also to reprove children who were naughty & couldn't recite their prayers. Good children received a gift. Naughty children may get only a lump of coal, or switches with which their parents could administer appropriate punishment (or, in some cases, the assistant would administer the punishment himself!).

The Dutch tradition of a big "Sint Nicholaas" market dates to the beginning of the 15C. During the Reformation, a ban was placed on the celebration of Saint Nicholas Eve in the Netherlands, forbidding passing out of cookies & cakes to children, a custom similar to trick-or-treating on Halloween (All Hallow's Eve, October 31). 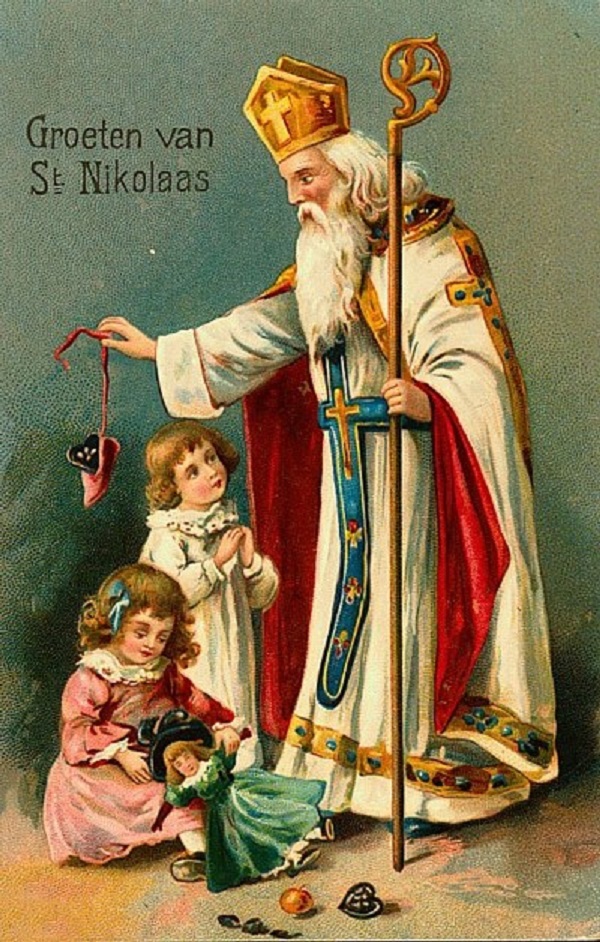 The Dutch enacted the following ordinance in the mid-1600s:
"Since the magistrates [of Amsterdam] have learned that in previous years, notwithstanding the publishing of the Bylaws, on Saint Nicholas Eve various persons have been standing on the Dam & other places in the town with candy, eatables, & other merchandise, so that a large crowd from all over town gathered…the same magistrates, to prevent all such disorders & to take the superstition & fables of the papacy out of the youths’ heads, have ordered, regulated, & opined that on Saint Nicholas Eve no persons, whoever they may be, are to be allowed on the Dam or any other places & streets within this town with any kind of candy, eatables, or other merchandise…[under penalty of very severe fines]."

Once again, the attempts by officials to repress these celebrations were exercises in futility. Notwithstanding the Reformation, the Dutch kept the Saint Nicholas tradition alive, as they joined in the flood of immigrants to the New World. The Dutch brought with them to the New World Christmas traditions that were quickly Americanized (which is how "Sinterklaas" became "Santa Claus").

In the Low Countries of Belgium, the Netherlands (Holland) & Luxembourg, St. Nicholas was known as Sint Nikolaas, Sanct Herr Nicholaas, or Sinterklaas, who sails from his castle in Madrid, Spain to the Netherlands on a steamship arriving on or about November 16th (hence the Dutch carol Zie ginds komt de stoomboot - English translation: Look, Here Comes The Steamboat). Sinterklaas arrives early so that he can visit children, schools, & hospitals. The "big night" is the eve of his festival, December 5th. He carries a big book that tells him how the Dutch children have behaved during the past year. Good children are rewarded with gifts & the bad ones are given a lump of coal, a bag of ashes, punished with a rod or switch, or even taken away in a sack by his assistant, Zwarte Piet (Black Peter, so called because he delivered the presents down the chimney for St. Nicholas in Holland & became blackened with soot; in other traditions, between 3 & 20 Spanish blackamoor servants in medieval Moorish costumes, who were called ‘Black Peters’, accompanied St. Nicholas). Children placed wooden shoes by the hearth or stove the night of St. Nicholas's arrival. The shoes were filled with hay, bread, or a carrot for Schimmel, the white horse of Sinterklaas. If they were good boys & girls they would find presents, fruit & money in their clogs when they woke up on the saint's feast day, December 6th.

These days, Dutch children often get their presents on the night of December 5th. Usually there will be a knocking on the door & a sack with presents will be sitting there. Grown-ups make silly presents for each other & all have to be accompanied with a rhyme. The family will spend the evening drinking hot chocolate, & eating 'boterletter' & 'speculaas'. Sinterklaas departs on his feast day, December 6th. An old tradition has the naughty children stuffed into a sack -- & dropped into the sea as Nicholas & Peter make their way home to Spain. A milder treatment says that the disobedient children are taken back to Spain, where the kindly saint & his assistants attempt to rehabilitate them.
at 5:00 AM