Story of the Flight into Egypt + Illuminated Manuscripts 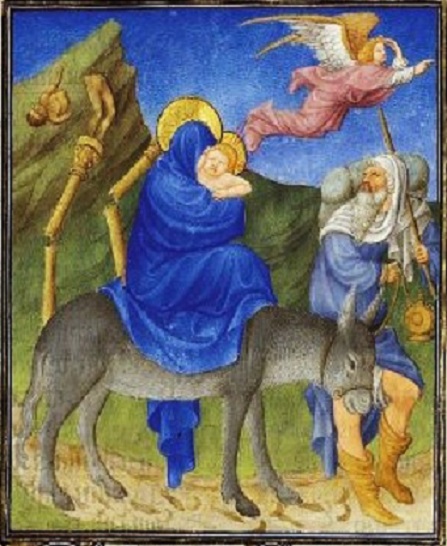 
The flight into Egypt is related in the Christian Bible in the Gospel of Matthew (Matthew 2:13-23). Joseph fled to Egypt with his wife Mary & infant son Jesus after a visit by Magi; when they learned that King Herod intended to kill the infants of that area. When the Magi traveled search of the newly born Jesus, they had visited Herod in Jerusalem to ask where to find the newborn "King of the Jews." Herod reportedly became worried that the child would threaten his throne. Herod decided that he needed to kill the newborn Jesus, (Matthew 2:1-8). Herod ordered the death of all infant males (Matthew 2:16-18). 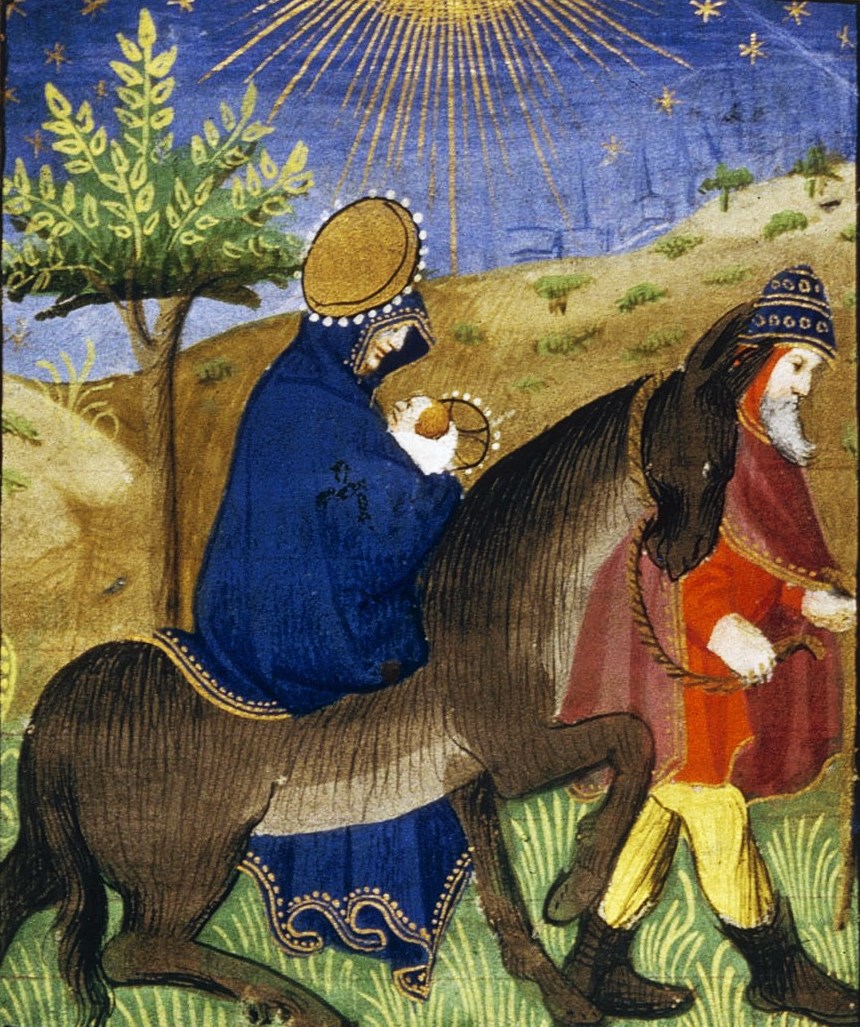 Illuminated Manuscript The Flight into Egypt Book of Hours

An angel warned Joseph to take Jesus & his mother into Egypt (Matthew 2:13). “‘Get up, take the child & his mother, & flee to Egypt, & remain there until I tell you; for Herod is about to search for the child, to destroy him.’ Then Joseph got up, took the child & his mother by night, & went to Egypt, & remained there until the death of Herod. This was to fulfill what had been spoken by the Lord through the prophet (Hosea 11:1), ‘Out of Egypt I have called my son’” (Matthew 2:13-15). Egypt was outside the rule of King Herod. Egypt & Palestine were part of the Roman Empire, linked by a coastal road known as "the way of the sea", making travel between them easy & relatively safe. Church scholars & historians speculate, that the Holy Family spent a period of about four years in Egypt. After the death of King Herod, Joseph returned to Nazareth with Mary & Jesus (Luke 2:39 & Matthew 2:19-23). 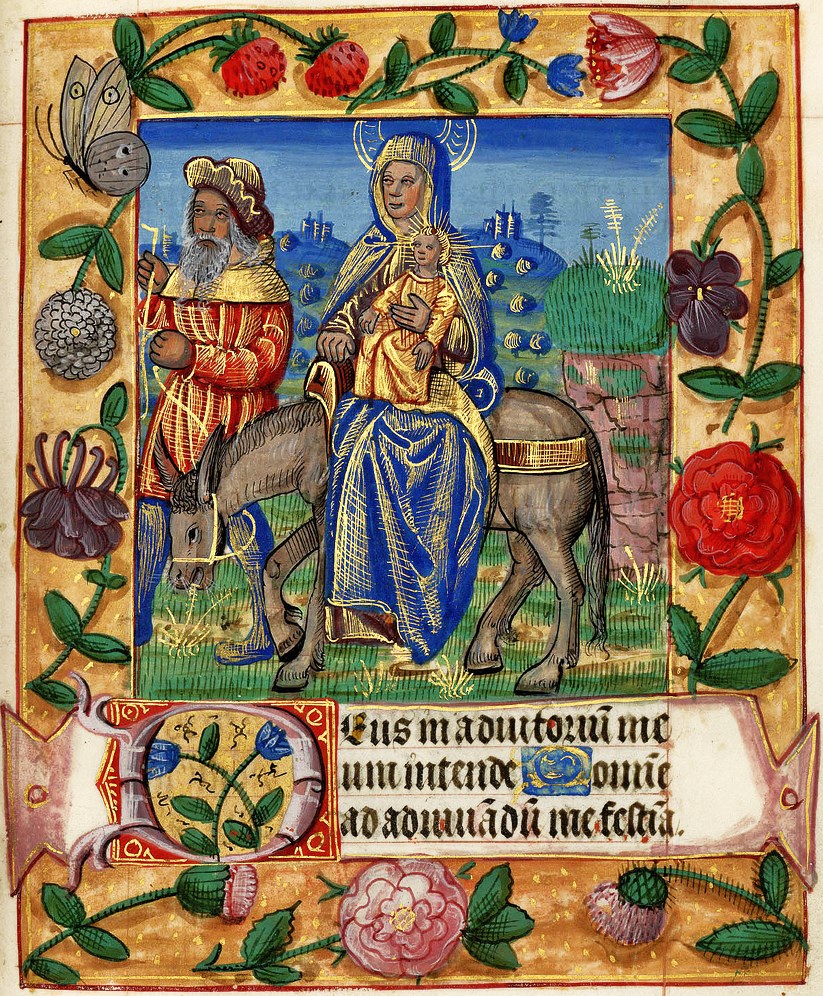 We are not told by Matthew exactly how long the Holy Family remained in Egypt, nor are we given any geographic information about their journey. The Nile River is not mentioned by Matthew. Although the expanded tradition is largely based on written accounts, physical sites that have been popularly associated with the Holy Family also play an important role in supplying further details. Sites made sacred because they are believed to have been touched by the Holy Family often feature unusual physical features. Some of these include miraculous hand or foot prints of the Christ child, unusually shaped trees thought to have sheltered the Virgin, or healing springs where the family quenched their thirst. 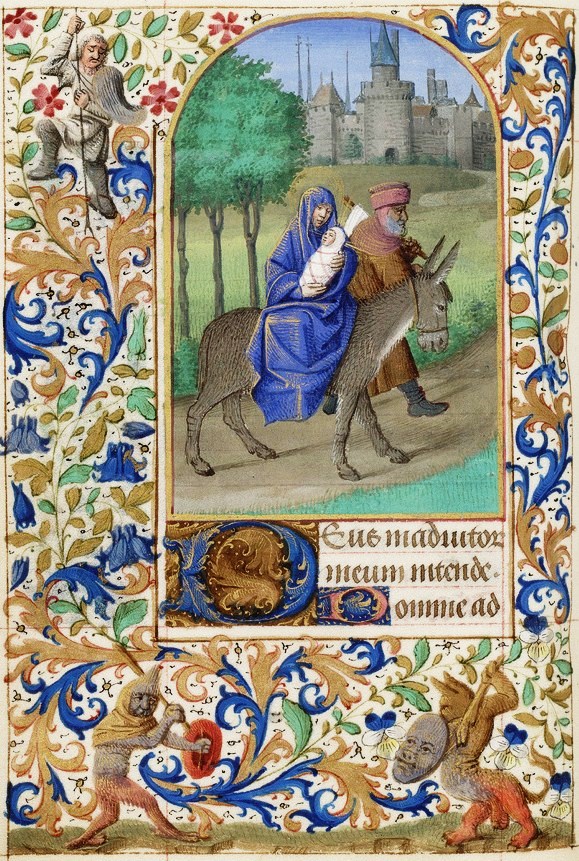 Illuminated Manuscript The Flight into Egypt 1400s HM 1163 Book of Hours of Paris manuscript at Huntington Library at Berkeley online at Digital Scriptorium.

These sacred sites are scattered across the Nile Delta, & are found along the Nile as far south as Asyut. Churches or monastic settlements mark most sites associated with the Holy Family in Egypt. The rich heritage of Coptic paintings, in particular icons & murals, is also an integral part of the network of belief & ritual practice shaped by the Coptic tradition of the Holy Family's journey in Egypt. The Coptic pictorial tradition is very conservative in nature. The iconographic image of the Flight has remained largely unchanged for the last 1500 years. It usually shows the Virgin holding the infant Christ, riding a donkey, & Joseph on foot. 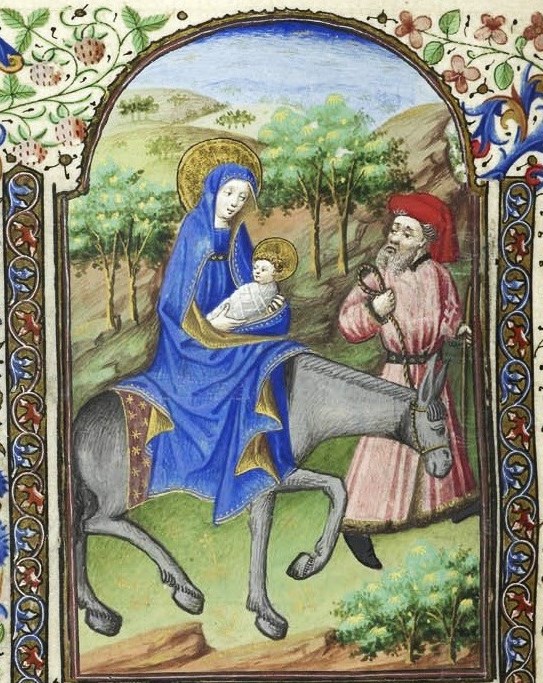 Illuminated Manuscript The Flight into Egypt

In addition to the few depictions of the Flight that have survived from this long period, a much wider range of sacred images that do not at first appear to be closely tied to the journey of the Holy Family should actually be understood to be making a reference to their stay in Egypt. Just about any Coptic depiction of the Virgin & the Christ Child can be seen as having points of connection with the Holy Family's trip, & with the transformation of Egypt into a 2nd holy land. 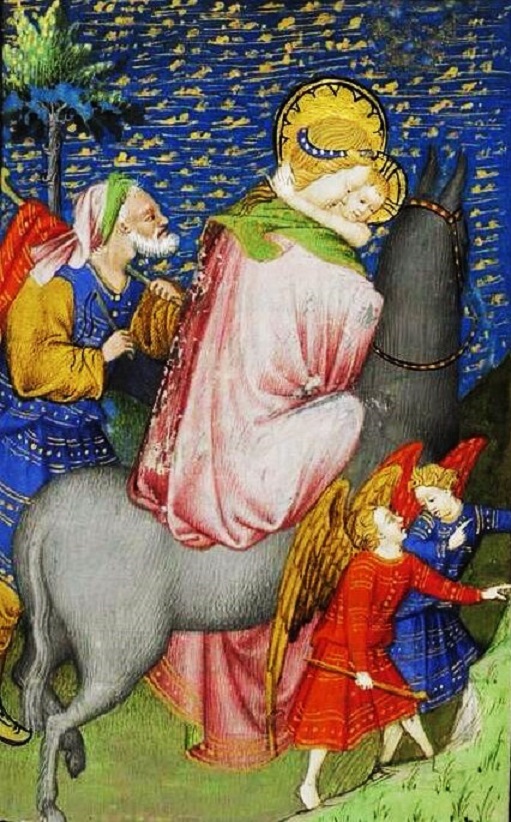 The Holy Family, according to Coptic traditions, seems to have spent most of their time traveling. Sometimes they are depicted in a boat on the Nile, but more often the Virgin & Jesus ride a donkey. It is possible to chart the Holy Family's journey through Egypt by combining written sources with sacred geographical sites. The Coptic Church divides stages of the Holy Family's journey into 4 geographic groups, consisting of the coastal road linking Palestine to Egypt, the Nile Delta, the vicinity of greater Cairo & the Nile Valley. 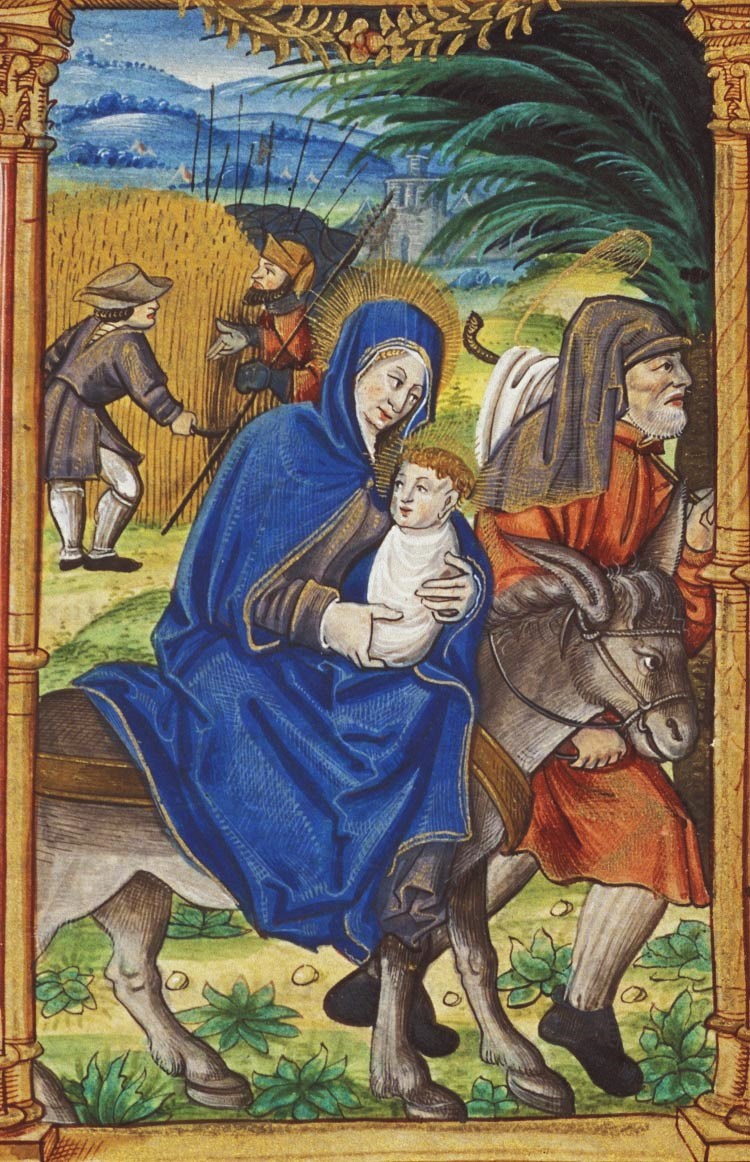 During their travels, written Coptic accounts indicate that they received charity from pious strangers, but often they were without shelter, food or water. Most of the sites associated with the Flight of the Holy Family reflect some tribulation overcome by the Holy Family. For example, walking in the heat of the day, they find shade under a tree, which is blessed. When they are hungry, a palm tree bows down, offering its dates. Their thirst is quenched by local wells, or in more dire circumstances, by springs brought forth by the infant Jesus. When chased by thieves, a tree opens up to hide them. If there is no room in an inn, they sleep in a conveniently located nearby cave. 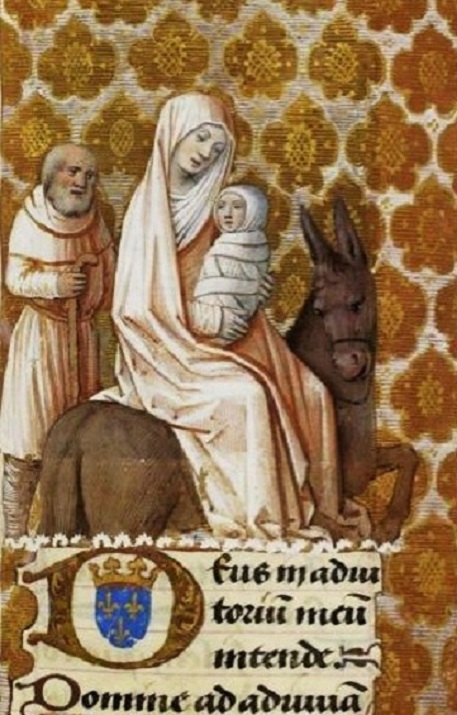 After each encounter, the tree, well, spring, or cave was thereafter endowed with miraculous healing power. In time, each became a place of pilgrimage that was marked by a church, monastery or convent, typically dedicated to the Virgin Mary. Hence, the Copts have a long tradition of venerating the Virgin (al-'Adhra). Indeed, such churches are found throughout Egypt. Though most are not actually associated with the Flight, their sheer number indicates the central position held by Mary in the devotion of the Copts. Six of the 15 largest Christian mulids (pilgrimage festivals) in Egypt are dedicated to the Virgin, & all but one are held at Holy Family sites. 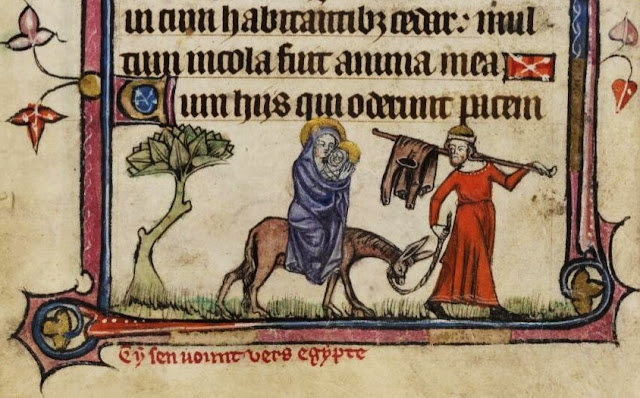 Today, in Egypt are many of the world's oldest Christian Churches, not to mention the very foundations of monastic orders. Its traditions related to the Christian religion are deep & fundamental, expanding forward from the Flight to the early days of persecution, the legalization of Christianity, & it is central to the internal strife that eventually broke the religion into various segments. 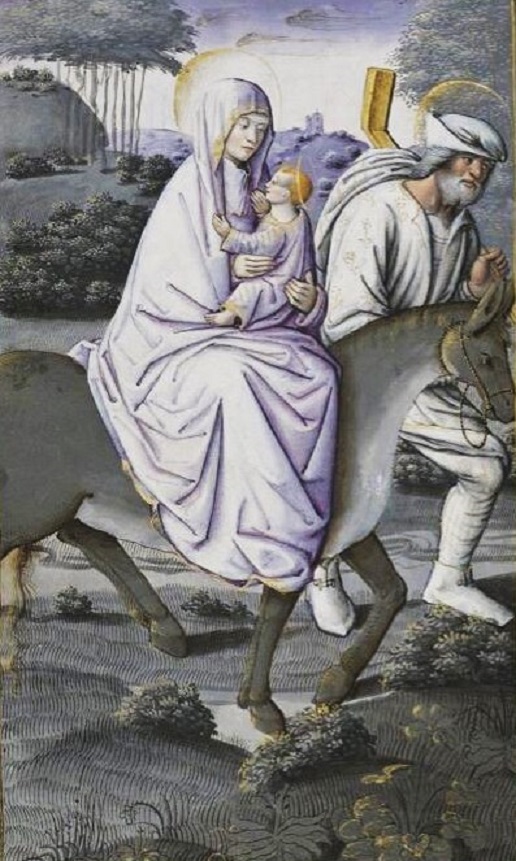 A French tradition states that Saint Aphrodisius, an Egyptian saint who was venerated as the first bishop of Béziers, was the man who sheltered the Holy Family when they fled into Egypt. It is also held that the Holy family visited many areas in Egypt including Farama, Tel Basta, Wadi El Natrun, Samanoud, Bilbais, Samalout, Maadi, Al-Maṭariyyah & Asiut among others. It is also tradition that the Holy Family visited Coptic Cairo & stayed at the site of Saints Sergius & Bacchus Church (Abu Serga) & the place where the Church of the Holy Virgin (Babylon El-Darag) stands now. At Al-Maṭariyyah, then in Heliopolis & now part of Cairo, there is a sycamore tree (& adjacent chapel) that is a 1672 planting replacing an earlier tree under which Mary was said to have rested, or in some versions hidden from pursuers in the hollow truck, while pious spiders covered the entrance with dense webs. 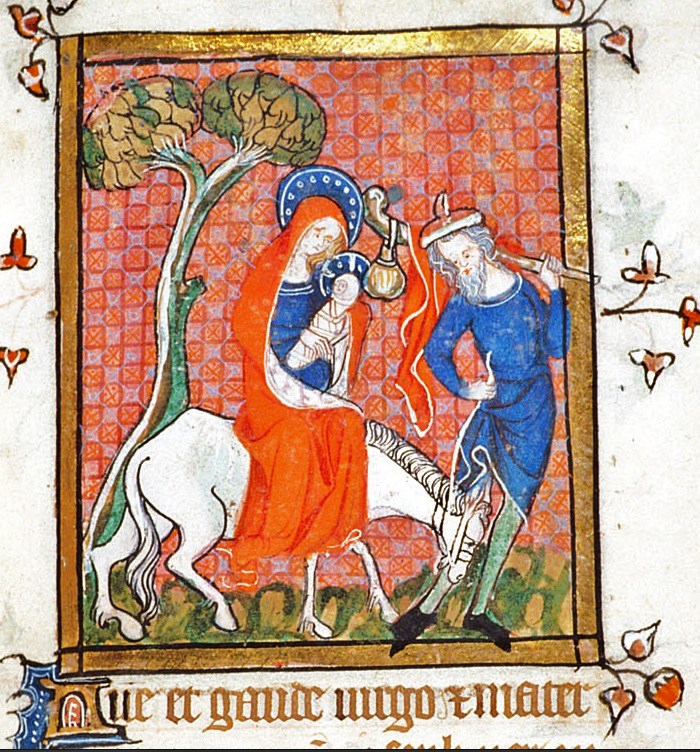 The word Copt is derived from the Greek word Aigyptos, which was, in turn, derived from "Hikaptah", one of the names for Memphis, the first capital of Ancient Egypt. The modern use of the term "Coptic" describes Egyptian Christians, as well as the last stage of the ancient Egyptian language script. Also, it describes the distinctive art & architecture that developed as an early expression of the new faith. 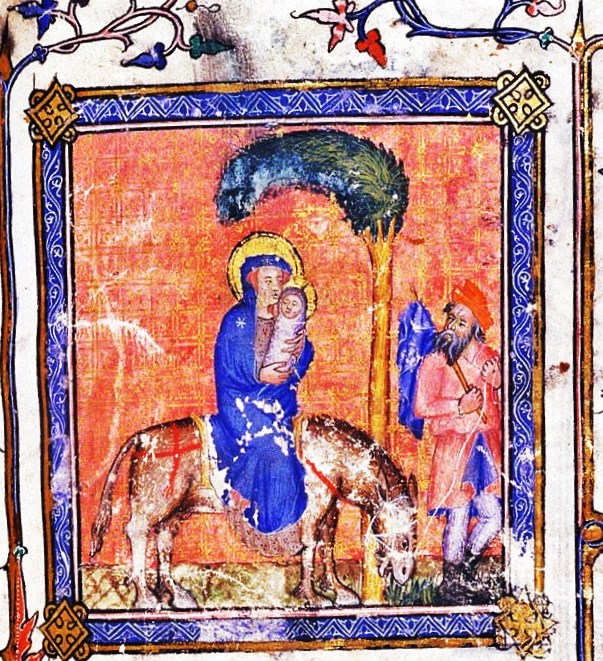 The Coptic Church is based on the teachings of Saint Mark who brought Christianity to Egypt during the reign of the Roman emperor Nero in the first century, a dozen of years after the Lord's ascension. He was one of the 4 evangelists & the one who wrote the oldest canonical gospel. Christianity spread throughout Egypt within half a century of Saint Mark's arrival in Alexandria as is clear from the New Testament writings found in Bahnasa, in Middle Egypt, which date around the year 200 A.D., & a fragment of the Gospel of Saint John, written using the Coptic language, which was found in Upper Egypt & can be dated to the first half of the 2nd century. The Coptic Church, which is now more than 1900 centuries old, was the subject of many prophecies in the Old Testament. Isaiah the prophet, in Chapter 19, Verse 19 says "In that day there will be an altar to the LORD in the midst of the land of Egypt, & a pillar to the LORD at its border." 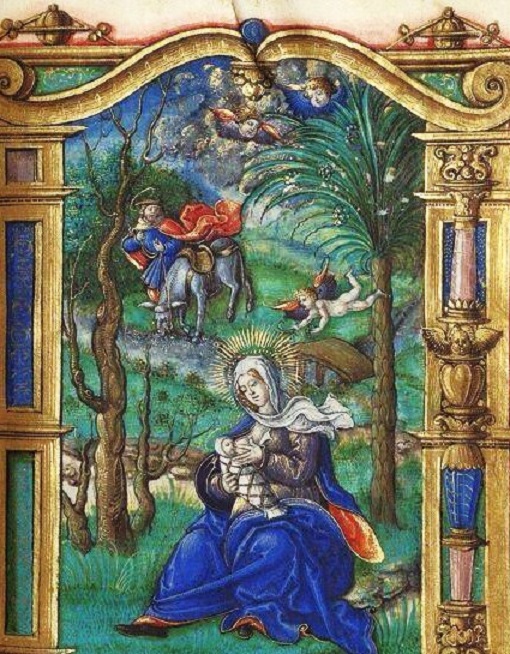 Although fully integrated into the body of the modern Egyptian nation, the Copts have survived as a strong religious entity who pride themselves on their contribution to the Christian world. The Coptic church regards itself as a strong defendant of Christian faith. The Nicene Creed, which is recited in all churches throughout the world, has been authored by one of its favorite sons, Saint Athanasius, the Pope of Alexandria for 46 years, from 327 A.D. to 373 A.D.
at 4:01 AM