1550 Allegory of Diana Goddess of the Hunt with faithful Dog 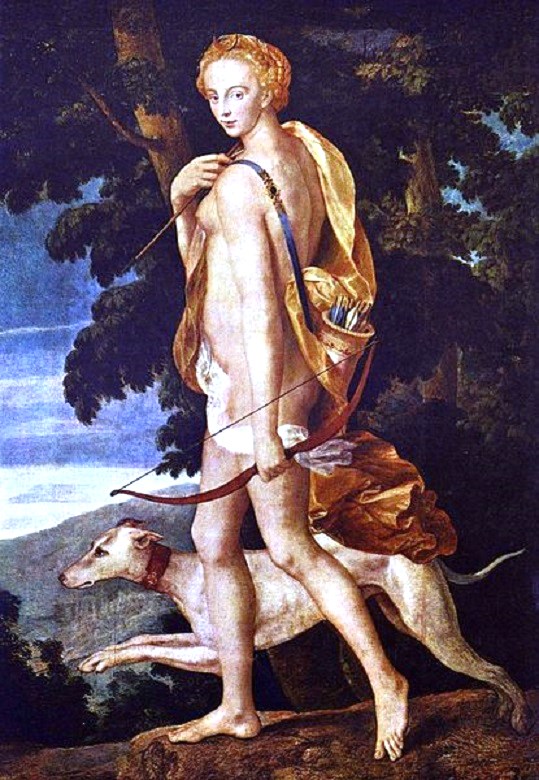 1550 Meister der Schule von Fontainebleau Diana the Huntress. This early Diana carries a bow & quiver & travels with her dog. But, as for clothing, a few yards of cloth seems enough.

Early European portrait artists sometimes painted their contemporaries as allegories. Allegorical portraits remained popular for several centuries, as they expanded to show the female sitter as a Biblical figure, a Greek or Roman goddess, or nymph or muse in in a rustic setting. Diana is a Roman goddess of the hunt, the moon, & nature, associated with wild animals & woodland. Diana was known as the virgin goddess of childbirth & women. Diana was originally considered to be a goddess of the wilderness & of the hunt, a central sport in both Roman & Greek culture. Early Roman inscriptions to Diana celebrated her primarily as a patron of hunters. Diana was often considered to be a goddess associated with fertility & childbirth, & the protection of women during labor. Her care of infants also extended to the training of both young people & dogs, especially for hunting. Unlike the Greek gods, Roman gods were originally considered to be divine powers of presence that did not necessarily have physical form. The idea of gods having anthropomorphic qualities & human-like personalities & actions developed later, under the influence of Greek & Etruscan religion. Diana was not only regarded as a goddess of the wilderness & the hunt, but was often worshiped as a patroness of families.