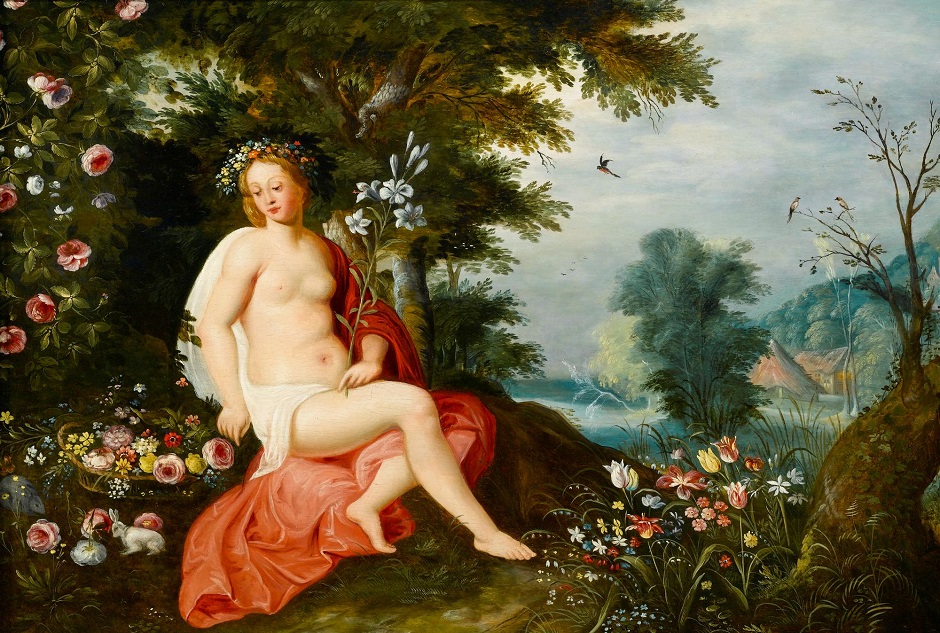 Here, Flora, the ancient Italian goddess of flowers, is draped in luxurious cream & scarlet robes & contrasting with the blue landscape behind her. Set in a secluded wooded clearing filled with an astonishing variety of wild flowers, the classical subject matter blends with Flemish realism in the 2 rustic huts depicted on the hill at the right.

Flora is framed by flowers. At her left side, rests a myriad of luscious pink roses, narcissi, buttercups, violas, primroses & poppies; while on her other side, tulips & bluebells mingle together. Nestled in the lush grass next to a wicker basket overflowing with blooms are 2 small rabbits. Throughout the ages the rabbit has been a symbol of fertility & lust. Perhaps these rabbits allude to the licentious nature of Flora’s ancient Roman festival, the Floralia which was held in April & included theatrical entertainment featuring naked women.

Both Ovid & Lucretius describe the goddess Flora in their works. Lucretius, in his explanation of the origins of nature, De Rerum Natura, describes how Flora followed in the footsteps of Zephyr (the east wind) strewing his way with blossoms.1  Ovid, from whom Sandro Botticelli (1445-1510) later drew inspiration for his Primavera (Uffizi Gallery, Florence), tells of Flora fleeing from Zephyr: "When he at length embraced her, flowers spilled from her lips; & she was transformed into Flora."2