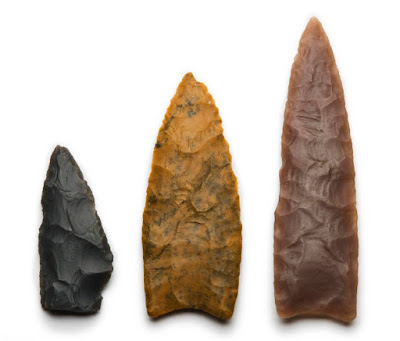 For decades, archaeologists associated finely fluted spear points—such as the two points at right—with the first people to live in the Americas. Image: Denver Museum of Nature & Science

A November 14, 2019, "Why it’s so challenging to determine ‘how and when’ humans first set foot in the Americas" by Megan Gannon published by the Genetic Literacy Project tells us that some arrived in North America by boat. The following information is gleaned from her article...

In 2014, a group of Canadian researchers uncovered human footprints pressed into a prehistoric layer of soil. The footprints, 29 in total, are the oldest found in North America. They suggest that 13,000 years ago, at least 3 people may have splashed out of a boat onto the damp shore.

North & South America seem to be the last major landmasses in the world to be populated by Homo sapiens. But the explanation of how & when this peopling happened has been heavily revised in the last 2 decades. New data, especially from the Pacific coast areas, including genetic findings, continue to complicate the story of how these continents came to be peopled.

The search intrigued archaeologist Edgar B. Howard when he learned in 1932, of mammalian fossils coming from a site called Blackwater Draw in New Mexico. A construction crew had exposed an extensive deposit of bison & mammoth bones, & there Howard found spear points & other human artifacts scattered among the remains of extinct mammoths, camels, & bison. At the time, researchers were only beginning to appreciate that humans were in the Americas during the last ice age, which ended around 10,000 years ago. In the years to follow, archaeologists would unearth sleek, fluted spear points, just like the ones found at Clovis, across North America. These artifacts came to be known as Clovis points & linked to people whom archaeologists considered the “first Americans.”

In the 1930s it was a  belief among many anthropologists that ancestral Native Americans descended from people living in Asia who crossed into the Americas over a now-submerged open tundra bridging Russia & Alaska, the Bering Land Bridge, also known as Beringia. From there, these people were speculated to have traversed a narrow passage between glaciers covering Alaska & Canada that only opened up about 13,500 years ago. The prevalence of Clovis-style spear points, which generally date between 13,250 & 12,800 years old, suggested that the first people in the Americas spread quickly after their arrival. Scientists broadly referred to this narrative—encompassing not just the cultural artifacts but also the time frame & land bridge—as the Clovis-first model.

Eventually cracks appeared in the Clovis-first model. In 1976 Chile, researchers excavating at Monte Verde uncovered undeniable traces of a human presence, preserved under peat. Researchers have confidently dated the most substantial cultural layer to about 14,500 years before the present day—at least 1,000 years older than the Clovis-first model would predict. We learned that people slept there under a long, tent-like structure made of wood & animal hides & sat around communal hearths eating potatoes & seaweed brought from trips to the coast.  In 1997, Monte Verde was inspected by a delegation of archaeologists, many of whom had questioned its purported age. They left in agreement that the site was old, indeed. Since then, in North America, several sites have gained wide acceptance as authentically pre-Clovis, but most of these older sites have no distinct artifacts to connect them.


The present method for dating artifacts is carbon dating. Radiocarbon dating (also referred to as carbon dating or carbon-14 dating) is a method for determining the age of an object containing organic material by using the properties of radiocarbon, a radioactive isotope of carbon. The method was developed in the late 1940s at the University of Chicago by Nobel Prize winning chemist Willard Libby. Presently, we can only date organic material using carbon dating, so artifacts like stone arrow heads can only be dated by association with the organic material they were found with.  The development of radiocarbon dating has had a profound impact on archaeology. In addition to permitting more accurate dating within specific archaeological sites, it allows comparison of dates of events across great distances. Carbon dating is a useful tool but not a precise tool.  BWS

At Oregon’s Paisley Caves, archaeologists have dated fossilized human feces to 14,300 years ago. Beneath the Clovis layers along the shores of Buttermilk Creek in Texas, researchers have found thousands of stone tool fragments dating back 15,500 years. And on the Atlantic coast side of the nation, reportedly, The Meadowcroft Rockshelter in Pennsylvania, has a human history that may stretch back at least 16,000 years.

Most archaeologists, even the most conservative, would now agree that there were widely scattered, small but culturally diverse groups of people living in the Americas at least one or two millennia before the emergence of Clovis spear points.

Genetics also shed light on how & when entire lineages of people moved across continents. Genetic markers from the DNA of a child buried in what is now Alaska around 11,500 years ago, for instance, recently revealed that she shared equal DNA with all Indigenous populations in the Americas. The authors concluded she was likely descended from a population that remained in Beringia, instead of spreading through the lower continents. The Beringian population seems to have diverged from Siberian populations around 36,000 years ago. About 25,000 years ago, the Beringians became isolated, & a new genetic population emerged, one that scientists have confirmed relates to contemporary Native American people, splitting into 2 main lineages around 17,000 years ago. However, only a handful of ice age human remains have been studied at all—and archaeological data are needed to both confirm that story & help fill in the ancient pathways that humans first took across the continents.

The genetic data suggest one population may have spent thousands of years in Beringia, before spreading south into the Americas sometime during the Last Glacial Maximum between 27,000 & 19,000 years ago. Because of the ice, some claim that migrating people of the period did not walk but used boats. According to this coastal migration theory, some 16,000 years ago the ice had retreated from the coastlines of the Pacific Northwest, such that oceangoing people could take advantage of coastal resources like kelp forests to navigate all the way down the shores of California, eventually reaching sites like Monte Verde in Chile But no wooden boats from that era have been found along these shorelines. Some speculate that evidence of human habitation from at least 13,000 years ago on the Channel Islands in California indicates that people probably had the skills to build boats & reach these land masses.
at 6:00 AM