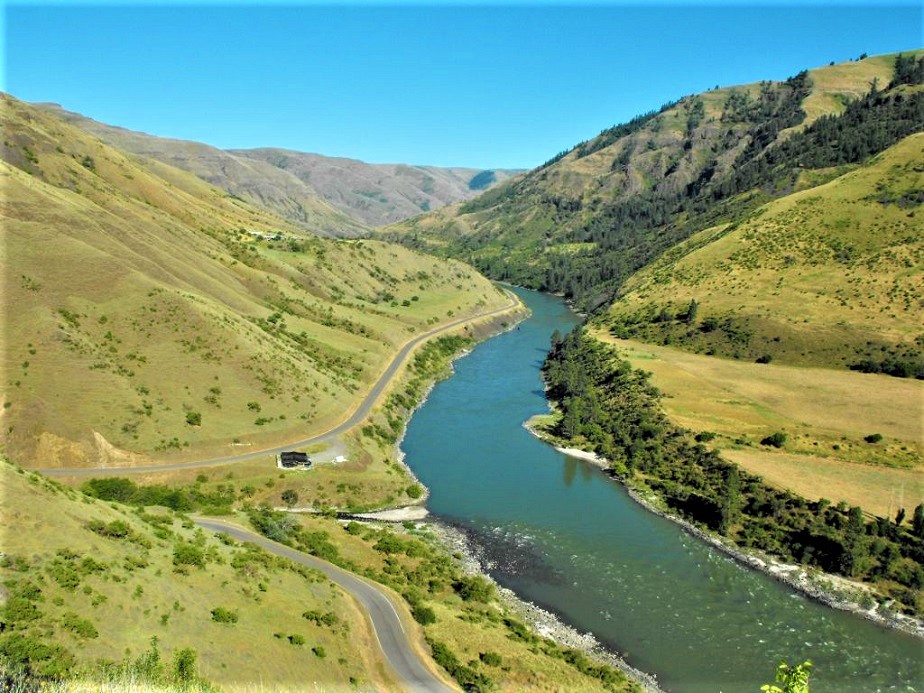 The Cooper's Ferry archeological site is in western Idaho.


Oldest Evidence of North American Settlement May Have Been Found in Idaho
By Yasemin Saplakoglu - LiveScience.com - Staff Writer August 29, 2019 History

The first settlers of North America might have been seafarers

Humans might have first settled North America around 16,000 years ago, setting off on boats from northeast Asia and traveling along the Pacific Coast, new findings suggest. That's the earliest evidence yet of settlement in this region.

The mystery of how the first settlers arrived in North America remains hotly debated. For years, the dominant theory has been that the first people to arrive in North America walked across the Bering Land Bridge, which connected Asia and North America, when sea levels dropped at the end of the last ice age. From there, the theory holds, they followed an ice-free corridor which opened around 14,800 years ago, down to North America.

But growing evidence suggests that the first settlers didn't trudge through a flat, grassy plain following large prey, but rather set off along the Pacific Coast in ancient boats.

This ancient migration was one of the last major movements of people across the planet, said lead author Loren Davis, a professor of anthropology at Oregon State University. So, "people have a sense of wonder" about this journey, Davis said.

To re-create the picture of this vast, ancient migration, Davis and his team analyzed ancient remains found at the Cooper's Ferry archaeological site, which sits at the junction of the Rock Creek and the lower Salmon River in western Idaho.

The Cooper's Ferry site was first excavated back in the 1960s. Prior to that, it was once an ancient village called Nipéhe, according to oral histories recounted to Davis by the Niimíipuu tribe. Between 2009 and 2018, Davis and his team opened up and excavated two large holes in the ground — one of which is the focus of this study. In that pit, spanning just 23 feet by 43 feet (7 meters by 13 meters), they discovered a trove of early remains and artifacts.

The team uncovered 189 artifacts, including 27 stone tools and 161 pieces of debitage, or flakes of rock created in the process of making stone tools. The tools included stemmed point fragments, which have previously been found all around the western U.S.

They also found bone fragments from an extinct horse, Davis said. Around the animal bone fragments the team discovered numerous stone tools. A little ways away, they found something resembling a hearth or fire pit. "We think that represents someone butchering a horse," and then possibly cooking and eating it, Davis told Live Science.

This might be "the earliest radiocarbon-dated evidence of people interacting with extinct animals in North America," Davis said. Through radiocarbon dating, a method that analyzes radioactive carbon in biological samples to figure out their ages, they found that biological samples in the hearth were similar in age to the bones.

The radiocarbon dating of these charcoal and bone samples revealed that people occupied the area for a long period of time, but the oldest biological samples were between 16,560 and 15,280 years old. Since they were found in the same layers as human artifacts, such as tools, they are likely of similar age, Davis said.

For a long time, it was thought that the first settlers of the Americas were the "Clovis" people who arrived around 13,000 years ago. But later excavations at various sites in North and South America revealed evidence of settlements that predated the Clovis culture, such as Monte Verde in Chile, which has some artifacts of human settlement that date to between 14,000 and 19,000 years ago.

These new results suggest that humans already lived in Idaho around 16,000 years ago — over a thousand years earlier than the time during which an ice-free corridor opened up across the western U.S. "So you might say that we refuted the hypothesis of the ice-free corridor," Davis said. The findings lend "great support to the idea that people came down the Pacific Coast instead."

This study "provides further support for the Pacific coast as the route by which Native Americans arrived in mid-latitude North America," said John Hoffecker, a fellow at the Institute of Arctic and Alpine Research at the University of Colorado, Boulder, who was not a part of the study. But "the authors have exaggerated the results of the dating." The dating suggests that the "earliest occupation of Cooper's Ferry is likely to be somewhat younger," closer to 15,000 years ago, Hoffecker told Live Science.

The authors suggest that some of the tools they found at Cooper's Ferry, such as the spear or dart points, are very similar to those found in northern Japan from a similar time. "So one hypothesis is simply that you're looking at the extension culturally of people that are bringing these ideas with them from northern Japan," Davis said.

But "both genetics and dental anthropology indicate unequivocally that Native Americans are not derived from northern Japan," Hoffecker said referring to the ancient people who lived in Japan.

The comparison of these Western stemmed points with Japanese counterparts is "superficial and unconvincing, based on five specimens selected for suggested morphological similarity," said Ben Potter, the department chair and a professor of archeology at the University of Alaska Fairbanks, who was also not a part of the study.

In any case, "there appears to be an interesting and dynamic geoarchaeological story here," Potter told Live Science. "My perspective is that Cooper’s Ferry is intriguing, but not paradigm shifting."

Next, Davis and his team hope to further explore if there really is a connection between these ancient inhabitants and the people of ancient Japan and spend more time analyzing the artifacts that they spent a decade excavating.
at 4:00 AM

Email ThisBlogThis!Share to TwitterShare to FacebookShare to Pinterest
Labels: Early people
Newer Post Older Post Home
Liberty Hyde Bailey (1858-1954) wrote "Science may eventually explain the world of How. The ultimate world of Why may remain for contemplation, philosophy, religion."