An Extremely Fast Peopling of the Early Americas 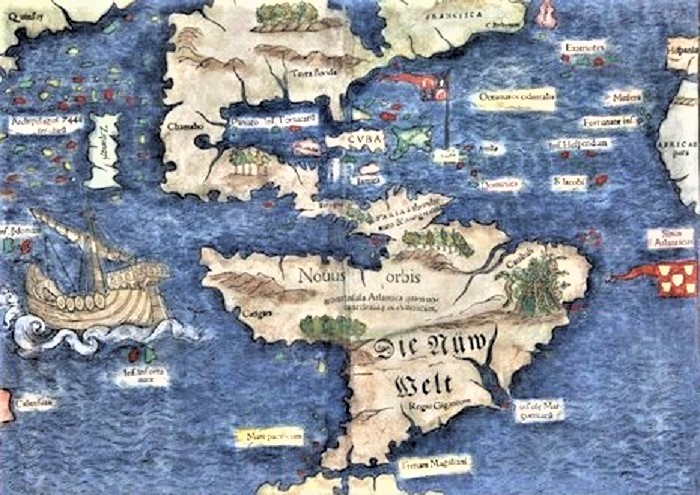 Tens of thousands of years ago, two gigantic ice sheets smothered the northernmost parts of what has since been named North America. They towered more than two kilometers high and contained 1.5 times as much water as Antarctica does today. They were daunting, impassable barriers to the early humans who had started moving east from Asia, walking across a land bridge that once connected the regions now known as Russia and Alaska. But once the ice started to melt, these peoples—the ancestors of the Americas’ Indigenous groups—spread southward into new lands.

Genetic studies, based on ancient remains, had already suggested that once the first American Indians got south of the ice, 14,600 to 17,500 years ago, they split into two main branches. One stayed north, giving rise to the Algonquian-speaking peoples of Canada. The other headed south, giving rise to the widespread Clovis culture, and to Central and South Americans. That’s a very rough outline, but a new study from J. Víctor Moreno-Mayar and his colleagues fleshes it out. They showed that whatever happened south of the ice, it happened fast.

They sequenced the genomes of 15 ancient humans, who came from sites ranging all the way from Alaska to Patagonia. One person from Spirit Cave in Nevada and five from Lagoa Santa in Brazil were especially instructive. They were all just over 10,000 years old, and though they lived 6,300 miles apart, they were strikingly similar in their DNA. Genetically, they were also closely matched to Anzick-1—a famous Clovis infant from Montana, who was about 2,000 years older.

All this suggests that, about 14,000 years ago, the southern lineage of early American Indians spread through the continent with blinding speed. To picture their movements, don’t think of a slowly growing tree, incrementally sending out new branches and twigs. Instead, imagine a starburst, with many rays zooming out simultaneously and rapidly.

In a matter of centuries, these people had gone down both sides of the Rockies, across the Great Basin, and into Mexico’s highlands. Within a couple more millennia, they had zipped down the Andes, through the Amazon, and as far south as the continent allowed. “Once they were south of the ice, they found a territory that was open, vast, and full of resources,” says Moreno-Mayar, who is based at the University of Copenhagen. “They were adept hunter-gatherers, so they expanded very quickly.”

This pattern confirms the suspicions of archaeologists, whose finds had long suggested that humans suddenly appeared throughout the Americas, from about 13,000 years ago onward. “You can now see that in the genetics,” Moreno-Mayar says.

Coincidentally, a second group of researchers, fronted by Cosimo Posth of the Max Planck Institute for the Science of Human History, independently found the same pattern. They studied the DNA of 49 ancient humans from Central and South America and found similar evidence for a rapid starburst expansion, and a southward migration that connects the Clovis culture of the north to early peoples in Belize, Brazil, and Chile.

These studies show that the histories of the Americas are more complicated than earlier genetic studies suggested, says Deborah Bolnick, an anthropologist from the University of Connecticut. But that’s more because those studies were overly simplistic to begin with rather than because the new results are surprising. “Many lines of evidence, including archaeological research, linguistic data, and Indigenous histories, have suggested that multiple groups of people—related, descended from shared ancestors, but still distinct—have lived, moved, and interacted in the Americas over the millennia,” she says. “Broadly, that is what these [new] studies show.”

They’re not just reinventing the wheel, though. For example, the tools of the Clovis people were so different from those found at Spirit Cave (which lies on the other side of the Rockies) that some researchers took them as evidence that the Americas were peopled by two genetically distinct founding groups. Moreno-Mayar and his colleagues have disproved that idea: They showed that the two groups were genetically similar, if culturally distinct.

Both teams also found evidence of later waves of migration that took place long after the Americas had been initially peopled—although the details differ between the two studies. Posth’s data point to a second wave of people who entered South America about 9,000 years ago, whose genes displaced those of the earlier Clovis-related people, and who had a direct connection to Indigenous groups today. By contrast, Moreno-Mayar’s data speak to a gentler process, in which relatively small groups slowly spread both north and south from Mexico from 8,000 years ago, adding their genes to the local populations without swamping them. Either way, they “challenge the idea that present-day native peoples all descend from a single, homogenous ancestral population,” says Maria Nieves-Colón, a geneticist based in Mexico’s langebio institute.

The two studies also differ on a particularly puzzling and controversial result. Back in 2015, the leaders of both Posth’s and Moreno-Mayar’s teams found that today’s Indigenous Amazonians share small hints of ancestry with people from Australia and Papua New Guinea—places on the other side of the Pacific. In their new study, Moreno-Mayar’s team found that same tantalizing smidgen of Australasian ancestry in the 10,400-year-old remains from Lagoa Santa in Brazil, but in none of the other remains they tested. “Every explanation that we can come up with for that is less plausible than the last,” says Moreno-Mayar.

If people with Australasian ancestry somehow entered the Americas before the early American Indians, how did they get into Brazil without leaving any trace in North America, either genetically or archaeologically? If they entered after the first American Indians did, how did they get from Alaska to Brazil seemingly without interacting with anyone else? If they sailed across the entire Pacific, after hypothetically inventing seafaring technology millennia before the Polynesians, how did they cross the Andes and traverse the Amazon?

It doesn’t help that Posth’s team didn’t find any Australasian DNA among their ancient remains, including ones from the same region of Brazil. It could be that people from that area were very diverse—or that the Australasian signal is a mistake. “The only way to get a better answer is to do more studies on other ancient samples,” adds Moreno-Mayar.