Northeastern Asia has a complex history of migrations & plague outbursts. That is the essence of an international archaeogenetic study published in Science Advances & lead from the Department of Archaeology & Classical Studies at Stockholm University. Genomic data from archaeological remains from 40 individuals excavated in northeastern Asia were explored in the study.

"It is striking that we find everything here, continuity as well as recurrent migrations & also disease-related bacteria," says Anders Götherström, professor at the Center for Palaeogenetics at Stockholm University & one of the Principal investigators of the study.

"It is intriguing that our data reveals complex & contrasting patterns of demographic change in one of the least populated regions on earth; including notable gene flow & at the same time a genetic continuity without major demographic changes in the two areas around Lake Baikal", says lead-author Gulsah Merve Kilinc, former postdoctoral researcher at the Department of Archaeology & Classical Studies at Stockholm University & currently Lecturer at Department of Bioinformatics at Hacettepe University in Ankara.

The study also provides some new clues to the history of the Paleo-Inuit groups, the people who inhabited northern Greenland & Canada. While it has been suspected that the so called Belkachi-complex, a cultural group in the Baikal area, played a part in the early history of Paleo-Inuits, it has not been possible to evaluate this in detail. The analyses of remains of an individual associated with the Belkachi cultural-complex, dated to more than 6000 years before present now show that there is an association to a previously published Paleo Inuit (Saqqaq) individual (dated c.4000 yrs BP) on Greenland.

"This is the first genetic evidence of a link between a Neolithic period human group in Yakutia & the later Palaeo-Inuit groups, & this will inspire to new of research on the demographic development", says Jan Storå, Professor at Osteoarchaeological Research Laboratory at the Department of Archaeology & Classical Studies at Stockholm University.

"Despite a need for more data, our discovery of the decrease in effective population size that coincided with the appearance of Yersinia pestis points to a possible presence of a prehistoric plague - possibly a pandemic. However, this is just as an educated guess which needs to wait for confirmation", says Emrah Krdök, former postdoctoral researcher at the Department of Archaeology & Classical Studies at Stockholm University & currently Lecturer at Mersin University in Turkey.

Mystery Of Paleo-Eskimos, The ‘Hobbits’ Of The Arctic Who Vanished 700 Years Ago, Revealed In Study By Philip Ross 08/30/14 International Business Times 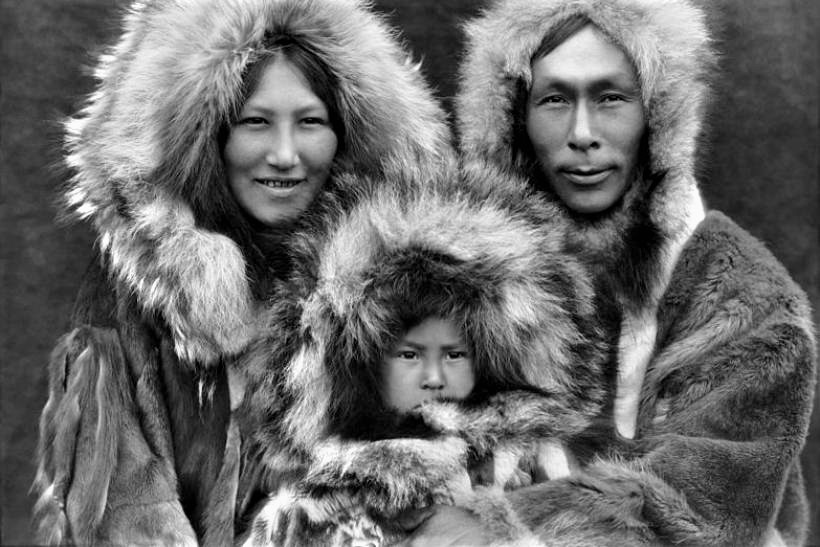 A family photo of an Eskimo mother, father, & son, photographed in Noatak, Alaska, by Edward Sheriff Curtis circa 1929. Modern-day Eskimos are the ancestors of the ancient Dorset culture who were the first people to inhabit the North American Arctic some 5,000 years ago.  Photo: Creative Commons

Paleo-Eskimos, the ancestors of modern-day Inuit & Native Americans & the earliest people to settle the North American Arctic, were isolated from other cultures for 4,000 years before vanishing around 1300 A.D., DNA analysis shows. The circumstances surrounding the strange disappearance of these early North Americans, known as the Dorset culture, has long been a mystery, but research suggests inbreeding, climate change or competition with other populations of hunters could have played a role, a study led by the University of Copenhagen & published Friday in the journal Science found.

“The Dorsets were the Hobbits of the eastern Arctic -- a very strange & very conservative people who we’re only just getting to know a little bit,” anthropologist William Fitzhugh, director of the Arctic Studies Center at the Smithsonian’s National Museum of Natural History & a co-author of the study, told the Washington Post. Because the Dorset people lacked sophisticated weaponry like bows & arrows, “they were, in a sense, sitting ducks,” he said.

Researchers studied the remains of some 169 Paleo-Eskimos discovered in northern Greenland, including their hair, bones & teeth. Scientists extracted mitochondrial DNA from the remains & compared it to genetic samples from modern people living in Greenland, northern Canada, the Aleutian Islands & Siberia. They found the Dorset people were genetically isolated from other populations & showed signs of inbreeding.

The research provides the clearest picture yet of how the North American Arctic was populated some 5,000 years ago. "Since the 1920s or so, it has been heavily discussed what is the relationship between these cultural groups," senior author Eske Willerslev of the Natural History Museum of Denmark, which is part of the University of Copenhagen, told the BBC. "All kinds of hypotheses have been proposed. Everything from complete continuity between the first people in the Arctic to present-day Inuits, [while] other researchers have argued that the Saqqaq & the Dorset & the Thule are distinct people."

Exactly who first populated the Arctic has long been debated. Scientists know  three broadly grouped cultures all occupied the northernmost parts of North America in the past few thousand years. They were the Saqqaq, who occupied the region until about 2,500 years ago, followed by several Dorset culture & then the Thule, the ancestors of modern-day Inuit, from about 1,000 years ago, the BBC said.

Because the Dorsets do not share any genetic similarities with people in the Arctic today, researchers concluded the population disappeared rather suddenly. Climate change could have something to do with it, scientists say. Regional temperature shifts could have strained the Dorsets food sources -- ox, seal & reindeer.

"When you're dealing with sea ice, just a few degrees can be transformative,” Todd Disotell, a professor of anthropology at New York University, told the New York Times. “Three bad winters in a row where you can't hunt seals, & you're in trouble.”