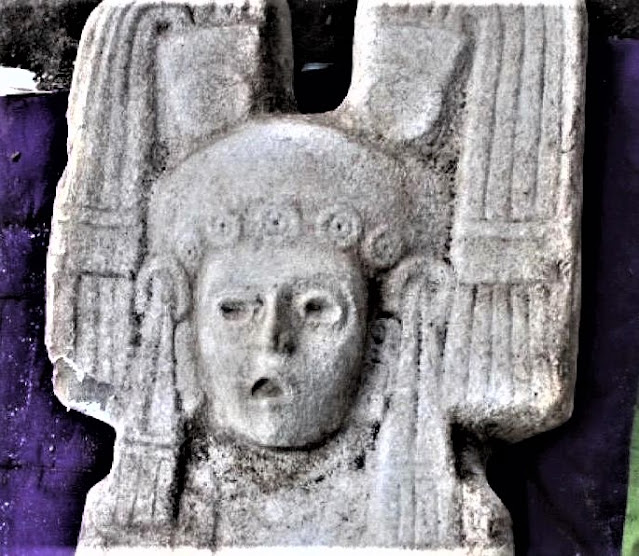 On New Year’s Day, farmers in the Huasteca region of Mexico’s Gulf Coast were ploughing soil in a citrus grove when they discovered something strange. After hitting an object they initially assumed was a rock, the group shoveled deeper, ultimately unearthing a six-foot-tall limestone statue of a Mesoamerican woman, according to a statement from the country’s National Institute of Anthropology and History (INAH).

As the Associated Press reports, the statue likely dates to between roughly 1450 and 1521 A.D. After examining the artifact, INAH experts determined that it was the first of its kind to be found in the region.  The area where it was found was not previously known to be an archeological site, and the stone statue may have been moved from some unknown original site.

Locals excavated the figurine between the pre-Hispanic Haustec ruins of El Tajín and the Aztec city of Tuxpan, in an area not previously identified as an archaeological site. Given the absence of similar historical objects in the grove, the team suggests the sculpture, which appears to shows Aztec influences, truly may have been moved there from its original location.

In the statement, as translated by the AP, archaeologist María Eugenia Maldonado Vite says the work could depict “a ruler, based on her posture and attire, [rather] than a goddess.”  Maldonado adds that she could also be “a late fusion of the Teem goddesses with the representations of women of high social status or politician in the Huasteca.”

The supine subject wears an ornate headdress, a necklace with a circular adornment known as an oyohualli, a long shirt and a skirt that grazes her ankles. (As Live Science’s Laura Geggel points out, the headdress is reminiscent of one worn by Star Wars character Ahsoka Tano.) The statue may depict an elite ruler or a fusion of a goddess and ruler. (INAH)

“The style of the young woman from Amajac is similar to representations of Huastec goddesses of the Earth and fertility, but with an external influence, possibly [the indigenous group] Nahua,” says Maldonado in the statement, as translated by Live Science. 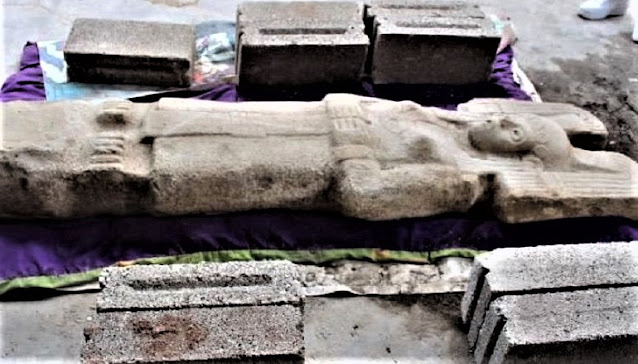 Though she’s shown resting in a peaceful position, the woman’s open-mouthed, wide-eyed expression is closer to a scream than a smile. Originally, Maldonado notes, the statue probably had obsidian inlays in place of its now-hollow eye sockets.

As Nathan Falde writes for Ancient Origins, the Huastec people who likely created the sculpture originally descended from the Maya. The group settled in the northeast region of the Gulf Coast around 1500 B.C. and created their own distinct culture—albeit with some Maya influences, according to a 2006 Arqueología Mexicana article by Felipe Solís Olguín.

Around the 15th century A.D., the neighboring Aztec civilization began encroaching on Huastec land in a series of military campaigns that ultimately resulted in the latter’s defeat, per Ancient Origins. (The Spanish conquest later decimated both Indigenous groups.) As a result of this contact, Aztec culture may have had some influence on Huastec artisans. Aztec sculptors also created stone figurines, many of which depicted deities connected to fertility or agricultural rites, as Mark Cartwright pointed out in a 2014 Ancient History Encyclopedia article.

If the newly unearthed statue does, in fact, portray an elite woman, not a goddess, she will join the ranks of quite a few female rulers depicted in pre-Hispanic artifacts.

In 1994 in the Mayan ruin site of Palenque, archaeologists found the tomb of a woman dubbed The Red Queen because of the red pigment covering her tomb. But it has never been firmly established that the woman, whose tomb dates from between 600 and 700 A.D., was a ruler of Palenque.

Susan Gillespie, an anthropology professor at the University of Florida, said there “there are quite a few pre-Hispanic depictions of elite women and female rulers elsewhere, best known among the Classic Maya but also in Classic Zapotec bas-reliefs and Postclassic Mixtec codices. Colonial era Aztec documents mentioned women ‘rulers’ or at least holders of the crown to pass on to their successors … so that is not a surprise,” Gillespie added. Women were highly valued in the pre-Hispanic era, drastically losing their status only after the conquest.

However, she noted that “if there is only one such find, it’s hard to say whether it is significant, or even correctly identified. Archaeology works best with repeated occurrences, to show a pattern."