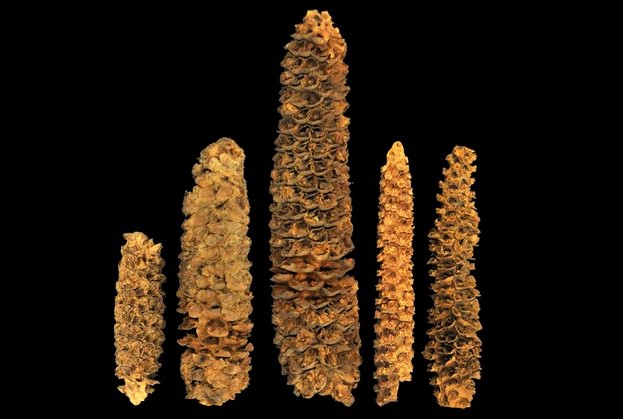 How Ancient DNA Unearths Corn’s A-maize-ing History
Smithsonian Magazine, December 14th, 2020 by Erin Malsbury
Sequencing entire genomes from ancient tissues helps researchers reveal the evolutionary & domestication histories of species. (Thomas Harper, The Pennsylvania State University) In the early 2000s, archeologists began excavating a rock shelter in the highlands of southwestern Honduras that stored thousands of maize cobs & other plant remains from up to 11,000 years ago. Scientists use these dried plants to learn about the diets, land-use & trading patterns of ancient communities.
After years of excavations, radiocarbon dating & more traditional archaeological studies, researchers are now turning to ancient DNA to provide more detail to their insights than has ever before been possible. In a paper published today in the Proceedings of the National Academy of Sciences, scientists used DNA from 2,000-year-old corn cobs to reveal that people reintroduced improved varieties of domesticated maize into Central America from South America thousands of years ago.
Archeologists knew that domesticated maize traveled south, but these genomes provide the first evidence of the trade moving both directions. Researchers at the Smithsonian & around the world are just beginning to tap into the potential of ancient DNA. This study shows how the relatively recent ability to extract whole genomes from ancient material opens the door for new types of research questions & breathes new life into old samples, whether from fieldwork or forgotten corners of museum collections.
DNA, packed tightly into each of our cells, holds the code for life. The complex molecule is shaped like a twisting ladder. Each rung is made up of two complementary molecules, called a base pair. As humans, we have around three billion base pairs that make up our DNA. The order of these base pairs determines our genes, & the DNA sequence in its entirety, with all the molecules in the correct position, is called a genome. Whole genomes provide scientists with detailed data about organisms, but the process of acquiring that information is time sensitive.
“In every cell, DNA is always being bombarded with chemical & physical damage,” said lead author Logan Kistler, curator of archeobotany & acheogenomics at the Smithsonian’s National Museum of Natural History. “In live cells, it’s easily repaired. But after an organism dies, those processes that patch things up stop functioning.” As a result, DNA begins breaking down into smaller & smaller fragments until it disappears entirely. This decomposition poses the greatest challenge for scientists trying to sequence entire genomes from old or poorly-preserved tissue.
Researchers wear protective suits & work in sterile conditions in the ancient DNA lab to prevent contamination. (James DiLoreto, Smithsonian) You have to take these really, really small pieces of DNA — the length of the alphabet in some cases – & try to stitch them back together to make even a 1000 piece long fragment,” said Melissa Hawkins, a curator of mammals at the Smithsonian who works with ancient DNA. “It’s like trying to put a book back together by having five words at a time & trying to find where those words overlap.”
This laborious process prevented researchers from sequencing whole genomes from ancient DNA until around 2008, when a new way to sequence DNA became available. Since then, the technology & the ability to reconstruct ancient DNA sequences has grown rapidly.
at 4:00 AM