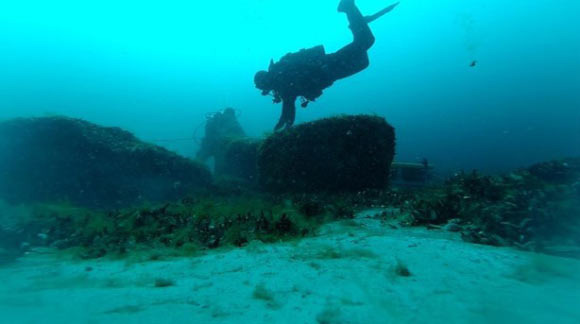 Obsidian, or volcanic glass, is a prized raw material for knappers, both ancient & modern, with its lustrous appearance, predictable flaking, & resulting razor-sharp edges.

As such, it was used & traded widely throughout much of human history.

Obsidian from the Rocky Mountains & the West was an exotic exchange commodity in Eastern North America.

“Obsidian from the far western United States is rarely found in the east,” said Dr. Ashley Lemke, an anthropologist in the Department of Sociology & Anthropology at the University of Texas at Arlington.

The two ancient obsidian artifacts were recovered from a sample of sediment that was hand excavated at a depth of 32 m (105 feet) in an area between two submerged hunting structures at the bottom of Lake Huron.

“This particular find is really exciting because it shows how important underwater archaeology is,” Dr. Lemke said.

“The preservation of ancient underwater sites is unparalleled on land, & these places have given us a great opportunity to learn more about past peoples.”

The larger artifact is a mostly complete, roughly triangular, biface thinning flake made from a black & translucent material with a sub-vitreous texture.

The second artifact is a small, very thin, translucent flake on a material visually similar to the larger specimen.

“The artifacts found below the Great Lakes come from a geological source in Oregon, 4,000 km (2,485 miles) away — making it one of the longest distances recorded for obsidian artifacts anywhere in the world.”