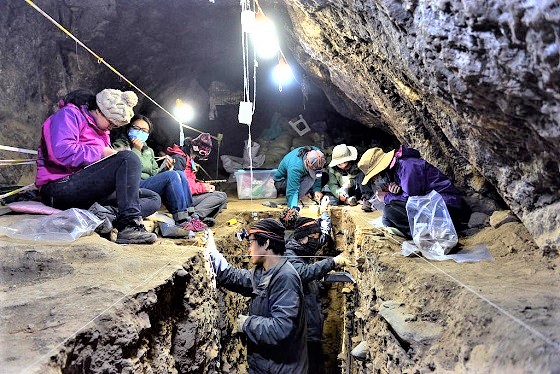 For today's Buddhist monks, Baishiya Karst Cave, 3200 meters high on the Tibetan Plateau, is holy. For ancient Denisovans, extinct hominins known only from DNA, teeth, and bits of bone found in another cave 2800 kilometers away in Siberia, it was a home. Last year, researchers proposed that a jawbone found long ago in the Tibetan cave was Denisovan, based on its ancient proteins. But archaeologist Dongju Zhang of Lanzhou University and her team wanted more definitive evidence, including DNA, the molecular gold standard. So in December 2018, they began to dig, after promising the monks they would excavate only at night and in winter to avoid disturbing worshippers.

After working from dusk to dawn while temperatures outside plunged to –18°C, then covering traces of their dig every morning, the scientists' persistence paid off. Today in Science, Zhang's team reports the first Denisovan ancient DNA found outside Denisova Cave: mitochondrial DNA (mtDNA) gleaned not from fossils, but from the cave sediments themselves. Precise dates show the Denisovans took shelter in the cave 100,000 years and 60,000 years ago, and possibly as recently as 45,000 years ago, when modern humans were flowing into eastern Asia.

The find shows that even though their bones are rare, "Denisovans were widespread in this hemisphere," says University of Oxford geochronologist Tom Higham, who was not part of the study. It also ends a long quest for Denisovan DNA outside Siberia. "Every year, I've said we will find this," says co-author Svante Pääbo of the Max Planck Institute for Evolutionary Anthropology (EVA). "It's been a decade."

The presence of Denisovan DNA in the genomes of living people across Asia suggested these ancient humans were widespread. But the partial jaw from Baishiya Karst Cave was the first fossil evidence. Zhang and her colleagues identified the jaw as Denisovan based on a new method that relies on variation in a protein. Some researchers questioned the claim, however, because the method was new, and no one knew where in the cave the jaw had been found.

Those questions are likely to fade. The dig, led by Zhang and Fahu Chen of the Institute of Tibetan Plateau Research, took many sediment samples and found charcoal from fires, 1310 simple stone tools, and 579 pieces of bone from animals including rhinos and hyenas. Paleogeneticist Qiaomei Fu of the Institute of Vertebrate Paleontology and Paleoanthropology in Beijing managed to extract hominin mtDNA from the sediment itself. The mtDNA, perhaps shed in poop or urine, most closely matched that of Denisovans.

Meanwhile, geochronologists led by Bo Li and Zenobia Jacobs of the University of Wollongong dated material from those same sediment samples. They used optical dating to reveal when light last struck mineral grains in the samples, showing when each grain was buried. The four layers that yielded Denisovan mtDNA were laid down 100,000, 60,000, and as recently as 45,000 years ago, although the younger sediments were disturbed.

The dates for the older sediments seem highly reliable, says Higham, who dated Denisova Cave. And by showing DNA and dates can be gleaned from the same sediment samples, the work opens "a new era of molecular caving," says geochronologist Katerina Douka of the Max Planck Institute for the Science of Human History.

The charcoal in the cave shows its occupants built fires. They also used simple stone tools, and, from the cave's high opening, must have spied on animals grazing in the meadows below. Some may also have been on the lookout for modern humans, who were in the region by 40,000 years ago.

In a separate study published today in Science, Pääbo reports extracting modern human DNA, the oldest yet in Asia, from 34,000- and 40,000-year-old fossils from what is now Mongolia and from near Beijing, respectively. Those genomes included Denisovan DNA, the legacy of mating that happened roughly 50,000 years ago. But the Denisovan sequences differed from those found in living New Guineans and Australian Aboriginals. Homo sapiens must have met and mated with two populations of Denisovans—one in mainland Asia and one in Southeast Asia, says EVA paleogeneticist Diyendo Massilani—further evidence that they were once numerous and wide-ranging.

The Denisovans bequeathed a particular genetic gift to modern Tibetans: a "superathlete" variant of a gene, called EPAS1, that helps red blood cells use oxygen efficiently and is found in Denisovans from Denisova Cave. Zhang and her colleagues think the Tibetan Plateau Denisovans may have been adapted to life at high altitude, and that EPAS1 may have spread widely among them, before they handed it on to modern Tibetans.

But molecular dating suggests EPAS1 spread rapidly only in the past 5000 years. And natural selection would have favored that gene variant only in people who lived at high altitude year-round, says archaeologist Mark Aldenderfer, professor emeritus at the University of California, Merced. The Denisovans may have lived only seasonally in the cave. Zhang's team will need to find nuclear DNA to test its hunch.

Zhang expects more digs at the cave will clarify the issue with DNA and perhaps fossils. "The study of this cave is only beginning," she says.

Neil Bockoven tells us that two breakthrough studies employing several cutting edge technologies have documented the oldest modern human DNA in Asia, and the first Denisovan DNA outside of Siberia.

It appears that modern humans showed up in Central Asia at roughly the time that Denisovans died off there. In one study, researchers tested sediments, not bones, in a Tibetan cave for DNA. The sediments were dated with optical methods, which can detect when light last struck the mineral grains. The mitochondrial DNA found in the sediments likely came from Denisovan poop or urine.

The other study determined that modern humans were in the Beijing area by at least 40,000 years ago. The optical dates from the cave sediment study indicate that Denisovans were there 100,000, 60,000, and probably 45,000 years ago.

Highly-respected geochronologist Tom Higham said that the finding ends a long quest for Denisovan DNA outside of Siberia, and it shows the species was widespread in the hemisphere before we showed up.

Earlier work has documented that we mated with Denisovans, and the fact that some people today in the Philippines, New Guinea and Australia carry as much as 6% Denisovan genes is further proof that the species was wide-ranging. The two studies highlight the breathtaking discoveries that are happening due to applying new technologies.