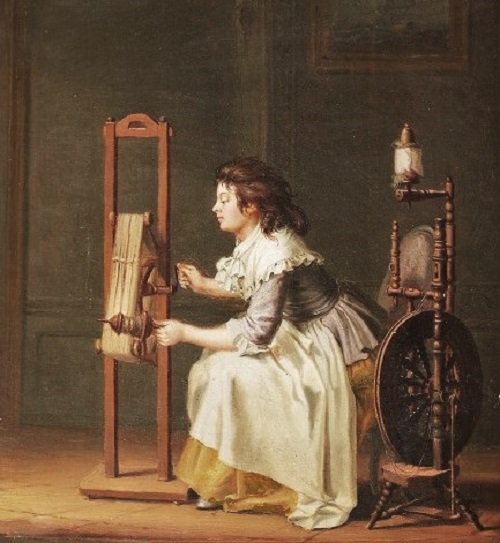 Pehr Hillström (1732-1816) A Young Woman Spinning
Elizabeth Fuller (1775-1856) was 14 years-old, when she started keeping a diary. She made regular entries from October 1790 through December 1792. She lived with her family on a farm in Princeton, Massachusetts.

Weaving is the process that creates all kinds of things, such as: clothes, towels, sheets, blankets, & sails to name a few. In early America almost all fabric was imported from England. Though England dominated the American market, the colonies had domestic producers, mostly in the northeast.  Some southern planters had their slaves make cloth, keeping agricultural laborers busy off-season & in bad weather. However, when trade in the United States became restricted during the period before & during the Revolutionary War, weaving not only became a necessity, but a patriotic duty.

The Boston Chronicle in April, 1766, wrote that women there "exhibited a fine example of industry, by spinning from sunrise until dark."  Spinning bees were held in early America to encourage the production of yarn to provide homespun fabric. In the 1760's these events became popular as a means to demonstrate opposition of the importation of heavily taxed British goods and for the mutual aid for those in their community.  The tradition continued after the conflict had ended.

However, spinning was a domestic chore not much practiced in colonial Virginia, as it was very time-consuming, and most cloth was imported. It would take 12 spinners of wool to keep a weaver busy at the loom, and 100 spinners of cotton to keep a full-time weaver busy. The technology of the spinning wheel dates to 500 B.C. in India.

Unmarried young women in rural New England during the 18C, often spent their days at home engaged primarily in textile production for both their own family's use & to trade for other items. Elizabeth Fuller washed, carded, & spun wool, while assisting with everyday chores such as making cheese & cooking.  The term spinster, once used to denote an occupation, began to refer to an unmarried woman in the 18C, as many continued to spend their days making textiles for the use of their extended families.

22 — Revd. Mr. Brown breakfasted with us this morning. He is an agreeable pretty man.

25 — Thanksgiving to-day we baked three ovens full of pyes. There was no preaching so we had nothing to do but eat them. The pyes were a great deal better than they were last Thanksgiving for I made them all myself, and part of them were made of flour which we got of Mr. H. Hastings therefore we had plenty of spice.
From: Francis E. Blake, “Diary Kept by Elizabeth Fuller,”
History of the Town of Princeton 1915
at 2:06 PM