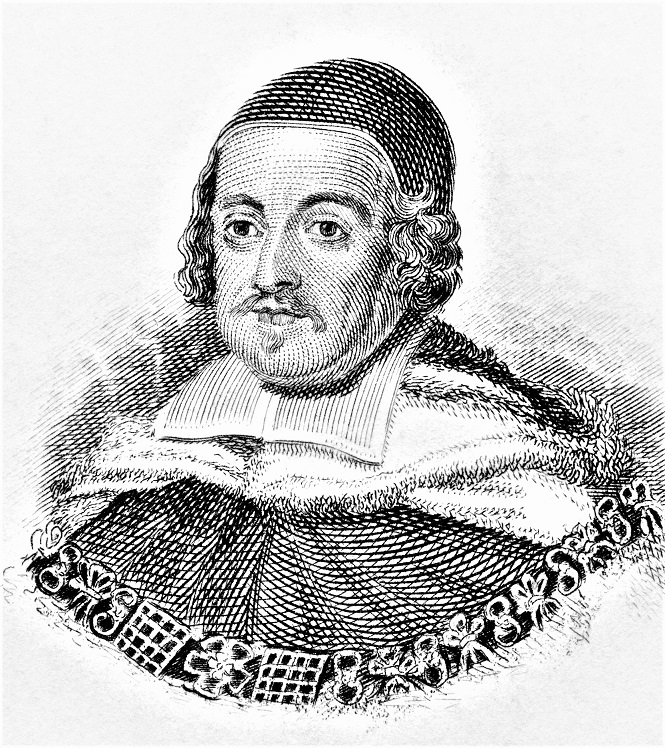 U.S. Supreme Court Justice Samuel Alito wrote the majority opinion detailing his reasons for overturning Roe v. Wade. In both his alleged draft opinion* & his final opinion for this case, Alito leaned liberally on the views of Sir Matthew Hale (1609-1676), a 17C English jurist who was adamant that it was legal that a married woman could be raped by her husband; & wrote an instruction to jurors to be skeptical of reports of rape. Hale´s views on rape, marriage & abortion have had a long legacy not only in Britain’s legal system, but also in those of the British Colonies. Hale also believe in female witches, & presided over the trials & executions of 3 women accused as witches in England.
Hale became Lord Chief Justice of England in 1671. Hale wrote a 2-volume legal treatise, “The History of the Pleas of the Crown,” that has influenced court proceedings ever since. Hale wrote that if a physician gave a woman with child a potion to cause an abortion, it was “murder.” Hale also believed there was no such thing as marital rape, “for the husband cannot be guilty of a rape committed by himself upon his lawful wife for by their mutual matrimonial consent & contract the wife hath given up herself in this kind unto her husband which she cannot retract.”
Hale described the abortion of a dead child (who died in the womb) as a "great crime." Hale believed an abortion could qualify as homicide. Hale wrote that if a doctor gave a woman "with child" a "potion" to cause an abortion, & the woman died, it was "murder" because the potion was given "unlawfully to destroy her child within her," Judge Alito declared in his draft opinion.
Hale’s pronouncement became the accepted common law & served as foundation in the British American colonies for immunizing a husband accused of raping his wife. Law review articles have questioned Hale's pronouncements. “Hale appears to have been the first to articulate what later would become an accepted legal principle, that a husband cannot be charged with raping his wife,” according to a footnote in one law review article. Another law review article, titled “The Marital Rape Exemption: Evolution to Extinction,” called Hale’s pronouncement “an unsupported, extrajudicial statement...”
Like the marital rape exemption, the so-called Hale Warning to jurors caused centuries of misfortune in the American courts. In his 1680 “Pleas of the Crown,” (which was published by the House of Commons in 1736) Hale called rape a “most detestable crime...It must be remembered, that it is an accusation easy to be made & hard to be proved, & harder to be defended by the party accused, tho never so innocent.”
Hale in weighing the evidence in cases of alleged rape, jurors  needed to consider "Did the woman cry out? Did she try to flee? Was she of “good fame” or “evil fame”? Was she supported by others? Did she make immediate complaint afterward?"
In 1793, in New York City, an aristocrat, Henry Bedlow, was accused of raping a 17-year-old seamstress, Lanah Sawyer. Bedlow hired six lawyers, who used Hale’s framework to destroy Sawyer. Sawyer said she screamed. But, one attorney asked the jury, did she also stamp her feet? He continued,  “she may have had the art to carry a fair outside, while all was foul within.” The jury took 15 minutes to acquit the accused. 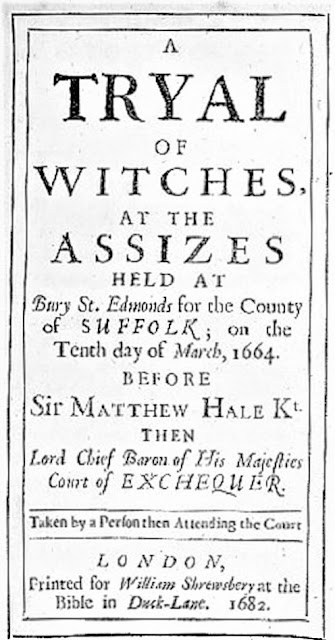 The written record of Hale’s trial in Bury St. Edmunds, served as a model in Salem, Massachusetts, in the infamous witch trials in 1692.  His beliefs guided elimination of justice for females in America's witch trials. In 1662, Hale had presided at a jury trial in Bury St. Edmunds in which 2 women, Amy Denny & Rose Cullender, were accused of being witches. Hale instructed the jurors that witches were real. At their trial, Hale declared: “That there were such creatures as witches he had no doubt at all; for first, the scriptures had affirmed so much. Secondly, the wisdom of all nations had provided laws against such persons, which is an argument of their confidence of such a crime.” Found guilty, Hale sentenced both women to hang. Four years earlier, Hale had also sentenced to death another woman convicted of being a witch.
The judgment of Hale in this case was extremely influential in future cases in England & in the British American colonies, & was used in the 1692 Salem witch trials to justify the forfeiture of the accused's lands. As late as 1664, Hale used the argument that the existence of laws against witches is proof that witches exist.
It is probable that English Jurist Matthew Hale (1609-1676) read Malleus Maleficarum 1486 (translated by Montague Summers 1928 - see Google Books) Written in Latin & first submitted to the University of Cologne on May 9th, 1487, the title is translated as "The Hammer of Witches." Written in 1486 by Austrian priest Heinrich Kramer (also Kraemer) & German priest Jakob (also James) Sprenger, at the request of Pope Innocent VIII. As the main justification for persecution of witches, the authors relied on a brief passage in the Bible (the book of Exodus, chapter 22, verse 18), which states: "Thou shalt not suffer a witch to live." The Malleus remained in use for 300 years. It had tremendous influence in the witch trials in England & her North American colonies, & on the European continent.
The Malleus was used as a judicial case-book for the detection & persecution of witches, specifying rules of evidence & the canonical procedures by which suspected witches were tortured & put to death. Thousands of people (primarily women) were judicially murdered as a result of the procedures described in the book because of having a strange birthmark, living alone, mental illness, cultivating medicinal herbs, or simply because they were falsely accused (often for financial gain by the accuser). The Malleus serves as a chilling warning of what happens when intolerance & violence take over a society.
Later in life, Hale wrote a long letter to & about his grandchildren, dispensing life advice, in which he described women as “chargeable unprofitable people” who “know the ready way to consume an estate, & to ruin a family quickly.” (See: Hale’s “Letter of Advice.” Google Books)
Hale's views of women are recorded in the book-length Letter of Advice to His Grandchildren : Matthew, Gabriel, Anne, Mary & Frances Hale. Of his granddaughter Mary, he wrote, possessed great wit & spirit, & “if she can temper the latter, will make an excellent woman, & a great housewife; but if she cannot govern the greatness of her spirit, it will make her proud, imperious, & revengeful.” Of granddaughter Frances, Hale wrote that she possessed great confidence: “If she be kept in some awe, especially in relation to lying & deceiving, she will make a good woman & a good housewife.” Of granddaughter Anne, Hale said she had a “soft nature.” “She must not see plays, read comedies, or love books or romances, nor hear nor learn ballads or idle songs, especially such as are wanton or concerning love-matters, for they will make too deep an impression upon her mind.”
One nearly redeeming paragraph in his advice to his grand children caught my eye, "Some men excel in husbandry, some in gardening, some in mathematics. In conversation, learn, as near as you can, where the skill or excellence of any person lies; put him upon talking on that subject, observe what he says, keep it in your memory, or commit it to writing. By this means you will glean the worth & knowledge of everybody you converse with; & at an easy rate, acquire what may be of use to you on many occasions."
After holding the office of Chief Baron for 11 years he was raised to the higher dignity of Lord Chief Justice of England, which he held until February 1676, when his failing health compelled him to resign. He retired to his native Alderley, where he died on the 25th of December of the same year. He was twice married & outlived 8 of his 10 children.
Note:
*Leaks about Supreme Court deliberations in a pending case are rare, & the leak of a draft decision is unprecedented. There is uncertainty about whether the leak violated federal laws, & experts differ as to whether the U.S. Department of Justice should pursue criminal charges.
See:
Barton, J. L. (1992). "The Story of Marital Rape". Law Quarterly Review. Sweet & Maxwell. 108 (April): 260–271.
Brown, David C. (1993). "The Forfeitures at Salem, 1692". William and Mary Quarterly. Omohundro Institute of Early American History and Culture. 50 (1): 85–111.
Geis, G. (1978). "Lord Hale, Witches, and Rape." British Journal of Law and Society. Wiley-Blackwell.
Hasday, Jill Elaine (2000). "Contest and Consent: A Legal History of Marital Rape". California Law Review. UC Berkeley School of Law. 88 (5): 1373–1505.
Ryan, Rebecca M. (1995). "The Sex Right: A Legal History of the Marital Rape Exemption". Law & Social Inquiry. Blackwell Publishing. 20 (4): 941–1001.
at 6:00 AM