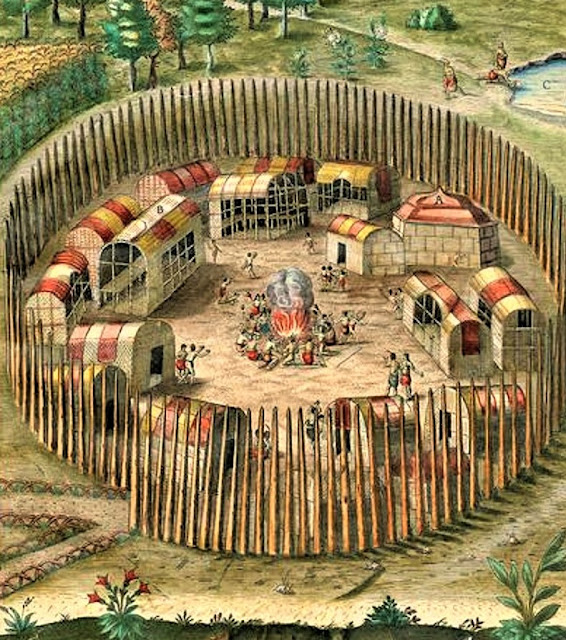 1590 North American Atlantic Coast Natives by John White (c1540 – c1593). The village of Pomeiooc (Pomeiock) was a Native America settlement, designated on de Bry’s map of Virginia, Americae Pars Nunc Virginia Dicta, between today’s Wyesocking Bay & Lake Landing, North Carolina. John White called the settlement Pomeyoo.
For thousands of years, Earth's indigenous people from separate  ethnic groups inhabiting a variety of the planet's climates & terrains have searched for; and created oral myths about plants & animals; & often have used nearby plants as medicine to control ailments afflicting them & their domestic animals. Many of these myths were passed down from generation to generation as oral tales before written language.
Extracted from:  Myths of the Cherokee.  Nineteenth Annual Report of the Bureau  of American Ethnology. Washington Government Printing Office 1902  Recorded by James Mooney (1861-1921) was an American ethnographer who lived for several years among the Cherokee.
Plant Lore
The poison oak or poison ivy (Rhus radicans), so abundant in the damp eastern forests, is feared as much by Indians as by whites.
When obliged to approach it or work in its vicinity, the Cherokee strives to conciliate it by addressing it as "My friend" (hi'ginalii). If poisoned by it, he rubs upon the affected part the beaten flesh of a crawfish.
at 4:00 AM