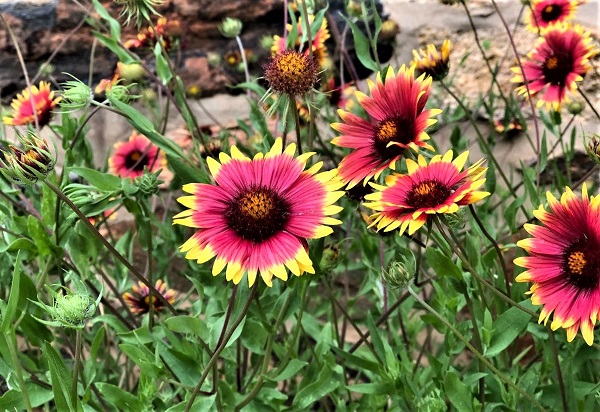 Old Salem Museums & Gardens﻿ tells us in its series Seeds with Stories: Gaillardia/Blanket Flower (Gaillardia pulchella) that this colorful native of both North & South America was named after M. Gaillard de Charentonneau, an 18C French magistrate who funded various botanists.

The common name, blanket flower, is believed to be a reference to the brightly colored flowers, which some believe resemble Native American traditional blankets in their colors & patterns.

The flower has another name on the North Carolina island of Ocracoke which carries with it a legend of love & loss. The flower is called Joe Bell there, & legend says that a man by that name was a member of a well-known family from Little Washington, North Carolina. His love rejected him, & he ran away to Ocracoke where he wandered, heartbroken.

Locals left him baskets of food which he returned filled with blanket flowers. Later, he was found dead, surrounded by the flowers which would, from then on, carry his name. There are several versions of this myth, & though it is unclear if the story is true in any way, it certainly adds an air of heartache & romance to this beautiful flower.

Old Salem explores the diverse cultural history of the early South, with special emphasis on the Moravians in North Carolina, enslaved & free people of African descent, & Indigenous peoples of the Southern Woodland.