Leonard Limousin (or Limosin) (c 1505-c 1577) was a French painter, the most famous of a family of 7 Limoges enamel painters, the sons of an innkeeper. Limoges had been famous for its enamelers & goldsmiths since the Middle Ages. He may have learned the enameling craft in a local workshop. Encouraged by the Bishop of Limoges, Limosin produced painted enamels on copper in all forms, including plates & plaques with mythological & religious subjects. His prolific workshop produced more than 1,000 pieces between 1533 & 1574. 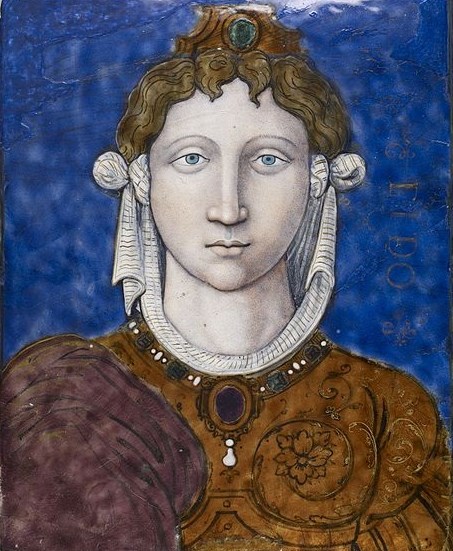 Following the taste of the Renaissance for portraits of heroes of antiquity, Léonard Limosin portrayed on enamel & copper the theme of Ovid's poem Heroides, about the tragic love affairs of heros & heroines as portraits. Hercules & Dejanira, Jason & Medea, Ariadne & Theseus, Phaedra & Hippolytus, Protesilaus, Paris, Briseis or Orestes, are all identified by their names written in gold letters, on a background in intense blue, typical of the artist’s famous portraits.

Limosin also supplied enameled plaques for Francis I's gallery at Fontainebleau, the largest collection of 16C French art. In 1548, he was appointed Enameler to the King. Limosin carried on a tradition begun by Italian painters working in France intended to suggest jewels. Limosin's profound influence on enamel work lasted through the 1600s. 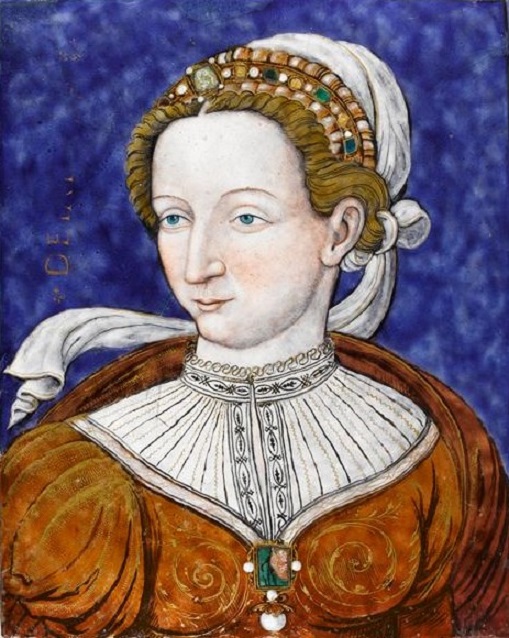 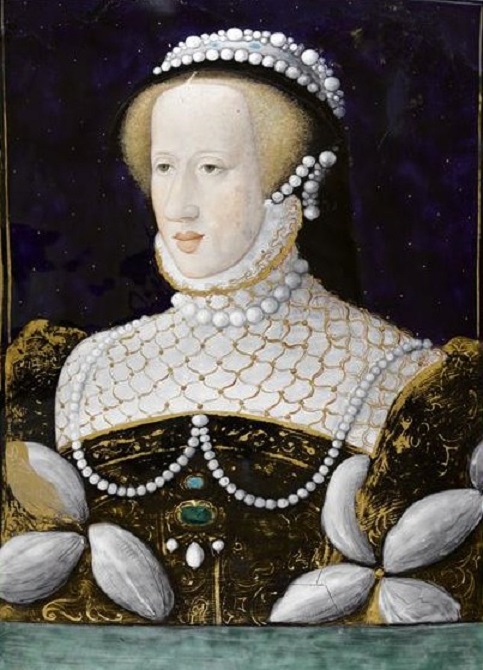 
Leonard Limousin or Limosin  (French painter c 1505-1577) la sibylle d'Erythrée from a series of 20, representing the apostles, sibyls and prophets from the Church of the Convent of Santa Maria Della Celeste at Venice 1535 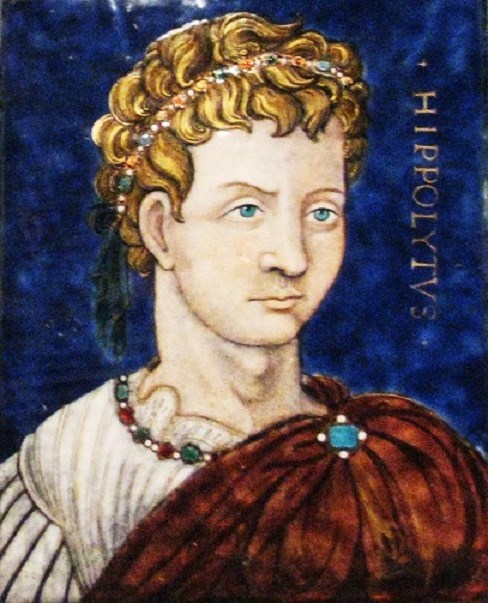 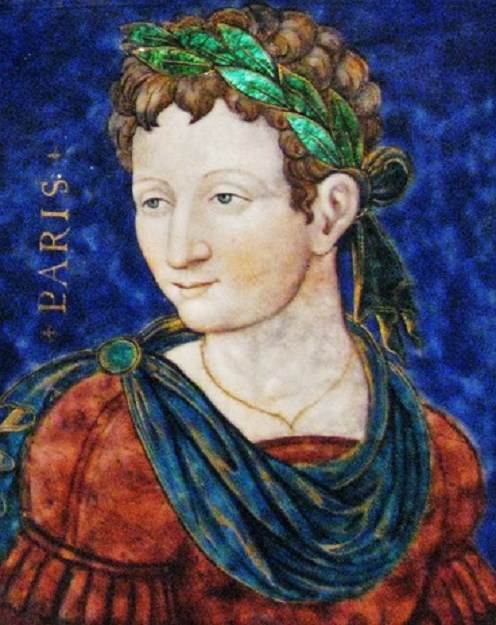 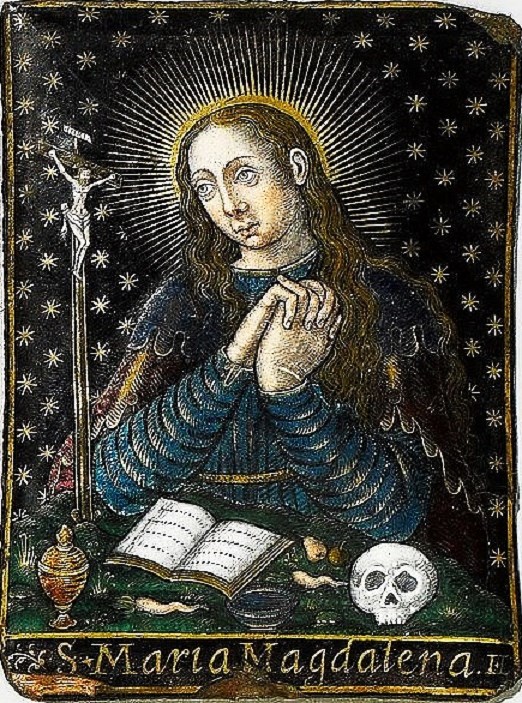 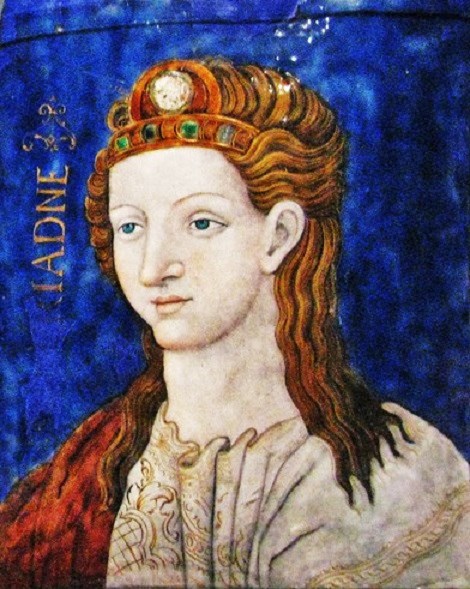 A few 16C miniatures from Stourhead in England 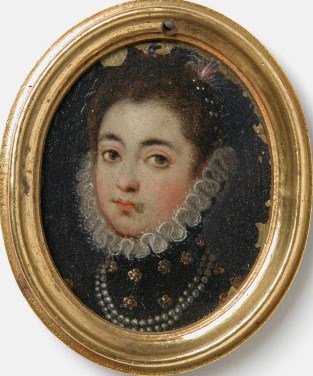 I first visited Stourhead on a beautiful May day, when a blanket of snow covered blossoms on Rhododendron ponticum planted there since the late 18th-century.  I went to see this great garden, & it was an amazing sight.  I immediately understood why it is one of the great landscape gardens in the world.  The house was not why I came, but it captivated me as well.  The Stourhead garden was created in the valley behind the 1725 Palladian mansion house by a wealthy English banker Henry Hoare II (1705-1785) who had been off buying works of art in Italy at the time he inherited the Stourhead estate.  A group of the smallest works of art in Stourhead is this collection of continental miniatures from the late 1500s to the early 1600s. 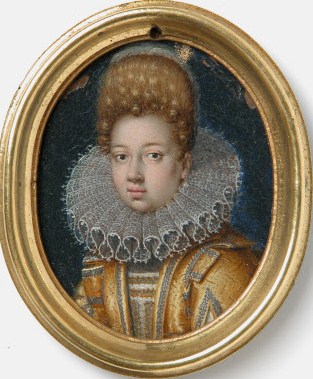 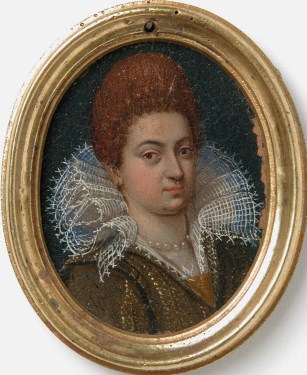 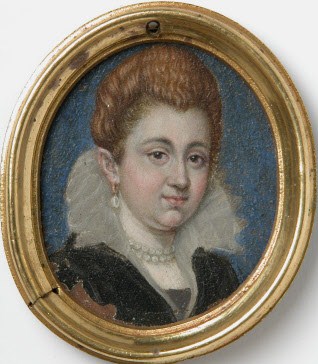 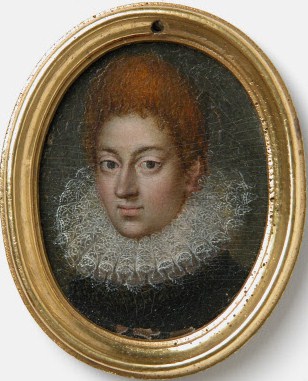 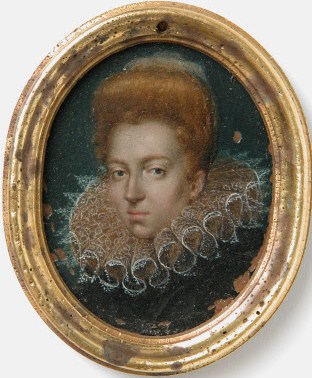 Posted by Barbara Wells Sarudy at 4:00 AM 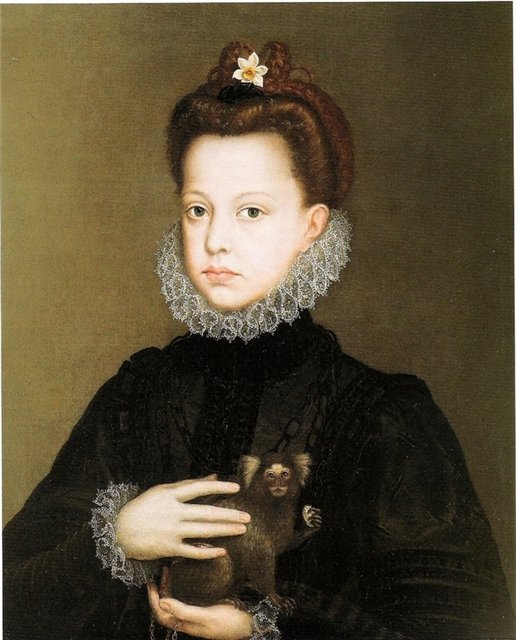 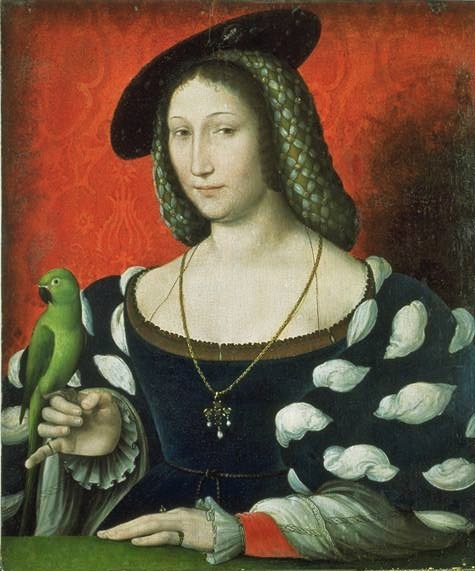 c 1530 Jean Clouet (French artist, 1475–1540) Marguerite de Navarre (also known as Marguerite of Angoulême and Margaret of Navarre) the wife of Henry II with her parrot 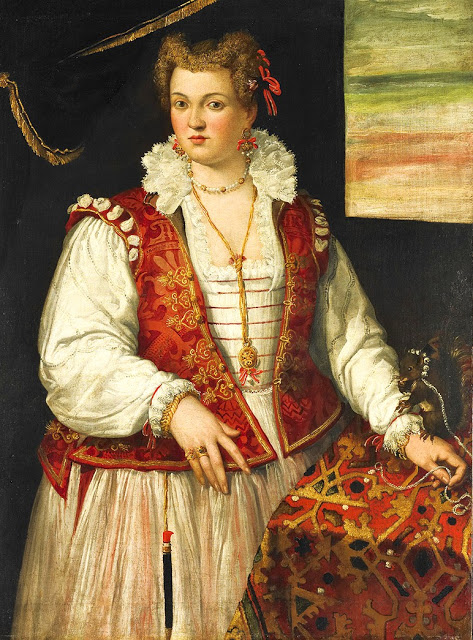 Francesco Montemezzano (Italian, Venetian, ca. 1540–after 1602). Portrait of a Lady with a Squirrel 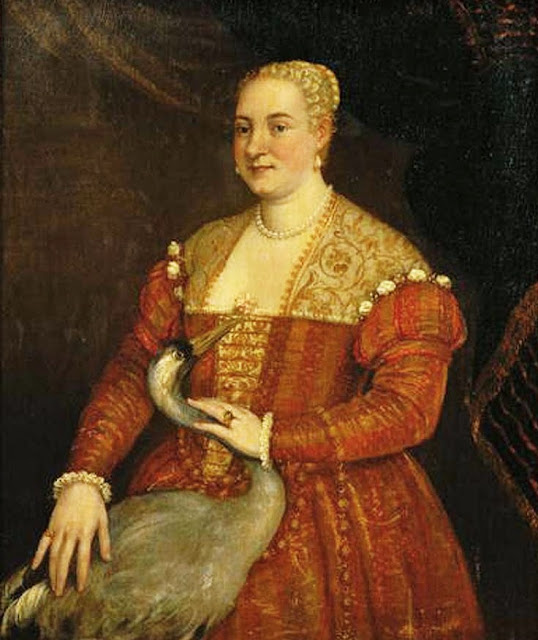 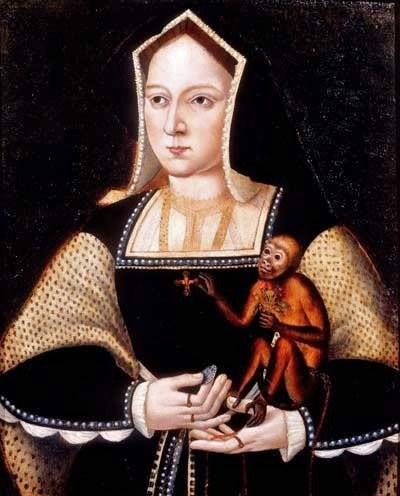 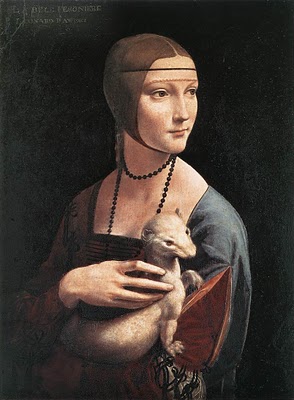 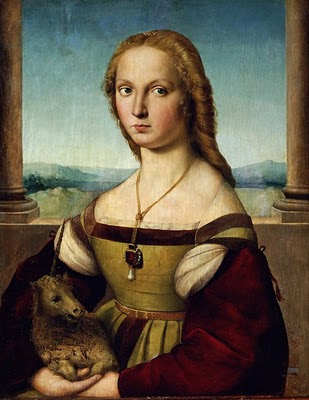 1505-6 Some attribute this painting to Raphael Raffaello Sanzio da Urbino (1483–1520), Portrait of a Lady with a Unicorn (Unsure about the authenticity of the attribution or the animal) 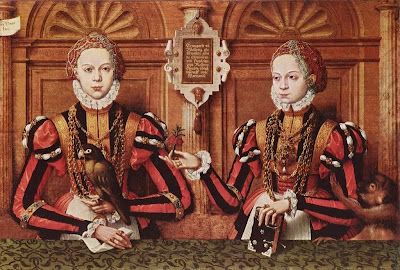 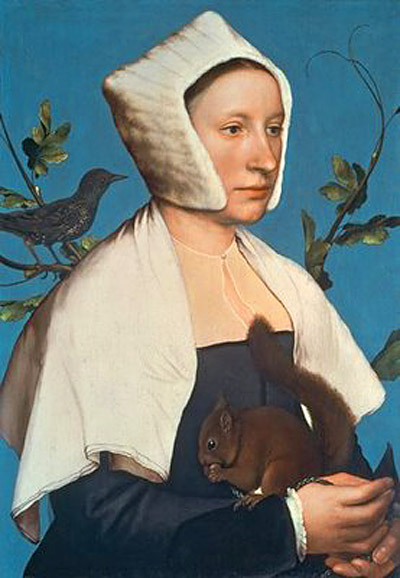 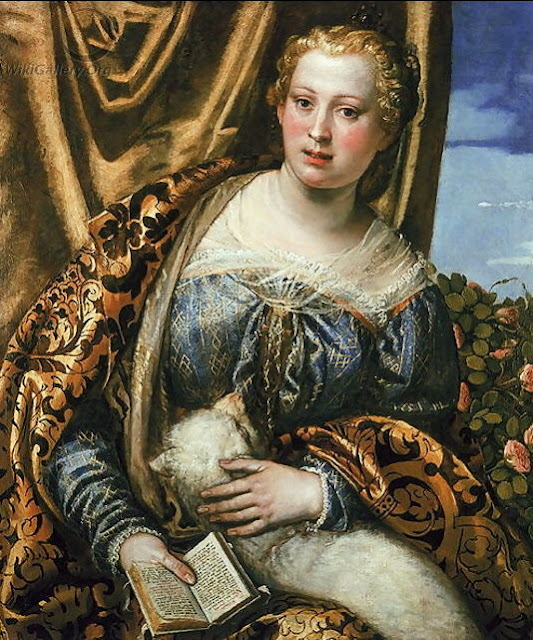 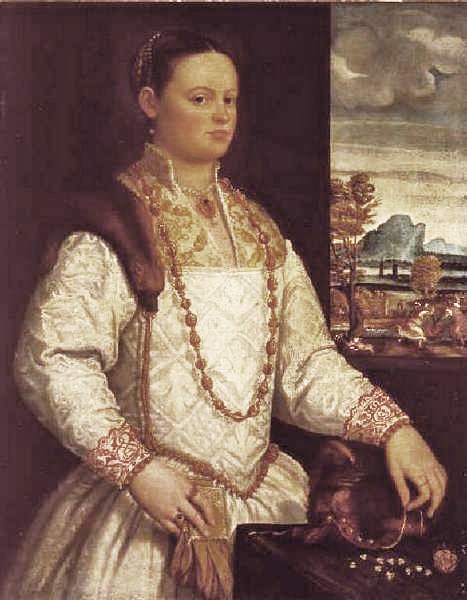 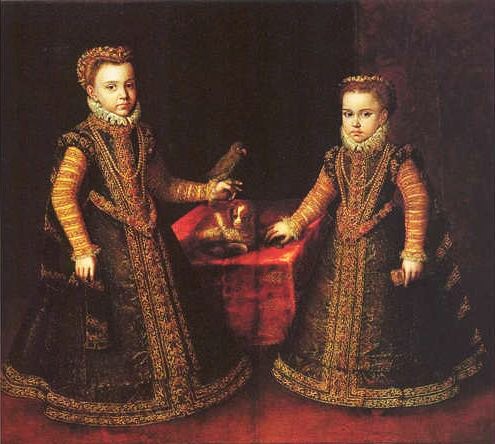 
Posted by Barbara Wells Sarudy at 4:00 AM

Food and Cookbooks in 16C & 17C England & Her Colonies

The late 1500s was the first time that cookery books began to be published on a regular basis. Many of these books concentrated on the 'secrets' of the wealthy - the confectioneries and remedies hidden in the closets of noblewomen, a powerful selling point in this period. Increasingly these books were aimed at women, as is revealed by titles such as The Good Huswifes Jewell. However, it is estimated that only between 5 and 10 percent of women were literate at this time - add to this the fact that the books were expensive commodities (as were the ingredients for the recipes), and it seems likely that the market for these books was confined to a small affluent area of society.

A turbulent century for England and her colonies

This was an era of war, fire, plague and execution - and it was a period in which English cultural life was transformed. The dissolution of the monasteries in the 1530s had led to new land ownership, and consequently to a new class of non-aristocratic landowners. The power battles between this new class and the monarchy would lead to civil war, to the execution of King Charles I, to a decade (the 1650s) of a Commonwealth government under Oliver Cromwell, and finally to the restoration of the monarchy under Charles II in 1660.

Despite this political turbulence, the new class of landowners was here to stay. And, as is typical, new wealth led to new markets and new ways to spend money. Towns became increasingly fashionable, and began to bulge with spending opportunities. London became the richest source of luxury foodstuffs in the country.

Throughout the century there was a growing fascination for food from mainland Europe. It is likely that this was fuelled by political events, such as the marriage of Charles I to the French princess Henrietta Maria in 1625, the forced exile in France and Holland of many supporters of the royalist cause during the Commonwealth, and Charles II's marriage to the Portuguese princess Catherine of Braganza in 1662. In any case, foreign food was all the rage. Samuel Pepys was extremely impressed to learn that his friend the Earl of Sandwich intended to employ a French chef, writing in his diary that the Earl had 'become a perfect courtier'. While the Great Fire of London raged, Pepys wrote of his feverish attempts to save his possessions, scrambling in panic for his bottles of wine and his parmesan cheese, all of which he buried safely in his garden.

French cuisine enlivened the English palate, flavouring its food with anchovies, capers and wine, and introducing coulis, roux, ragouts and fricassés. Fancy French dishes were nicknamed kickshaws, after 'quelquechose', the French word for 'something'. The influence of the Continent brought a greater taste for savoury dishes, and less of the traditional combinations of sweet and sour flavours. Thanks to the Europeans, the English realised that it was perfectly safe to eat raw fruit and vegetables, and began to enjoy salads with their meals. The first English coffee house was opened in London in 1652 by Pasqua Rosee, a servant to a Turkish merchant, who brought from Turkey his ingredients and his expertise. The drink became a huge hit, as did the coffee houses, which swarmed with fashionable social life throughout the century.

Nonetheless, traditional English food retained its popularity - the English still greedily tucked into their cakes, pies and puddings. Even after the death of Charles I (1652) there was strong nostalgia for pre-war royal traditions, and many recipes were tinged by a reverence for this faded glory.

The reign of Oliver Cromwell sparked a renewed interest in the customs of the old aristocracy, and cookery books appeared to be opening magical doors onto the glittering secrets of the wealthy.

Following the fall of the monarchy, many distinguished chefs lost their jobs, and this is likely to be the reason for the sudden wave of new cookery books at this time - these professionals would have been searching for new ways to make money. The political situation also meant that many people were moving up the social scale. It is therefore in this century that cookery books begin to instruct those unfamiliar with the etiquette of the wealthy, guiding them on subjects such as bills of fare, or servant behavior.

Although most 17th century cookery books were written by men, many of the recipes found in the books were originally devised by women. Gervase Markham, for example, admits in his book Countrey Contentments that the book's recipes were originally concocted by an 'honourable countess'. It was not uncommon for male cookery book writers to transcribe recipes found in unpublished manuscripts, many of which were written by aristocratic women, who would have had regular access to key ingredients. It is estimated that only around 10 percent of women were literate in the mid 17th century, and many were only taught to read, and not to write.

From the British Library.
Posted by Barbara Wells Sarudy at 4:00 AM

François Clouet, son of royal artist Jean Clouet, was a French Renaissance miniaturist & painter, particularly known for his detailed portraits of the French ruling family.  Like his father, he held the office of groom of the chamber & painter in ordinary to the king. He seems to have taken up where his father left off. Many paintings & drawings are attributed to this artist, often without much certainty. 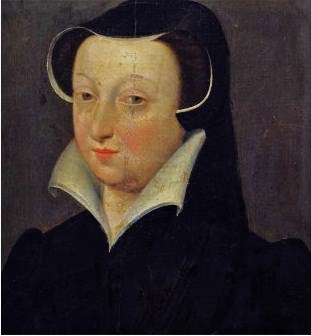 Attribued to François Clouet (French artist, 1510-1572) Portrait of a Woman

Posted by Barbara Wells Sarudy at 4:00 AM