In Indonesia - A 43,900-year-old cave painting is reportedly the oldest story yet found & recorded 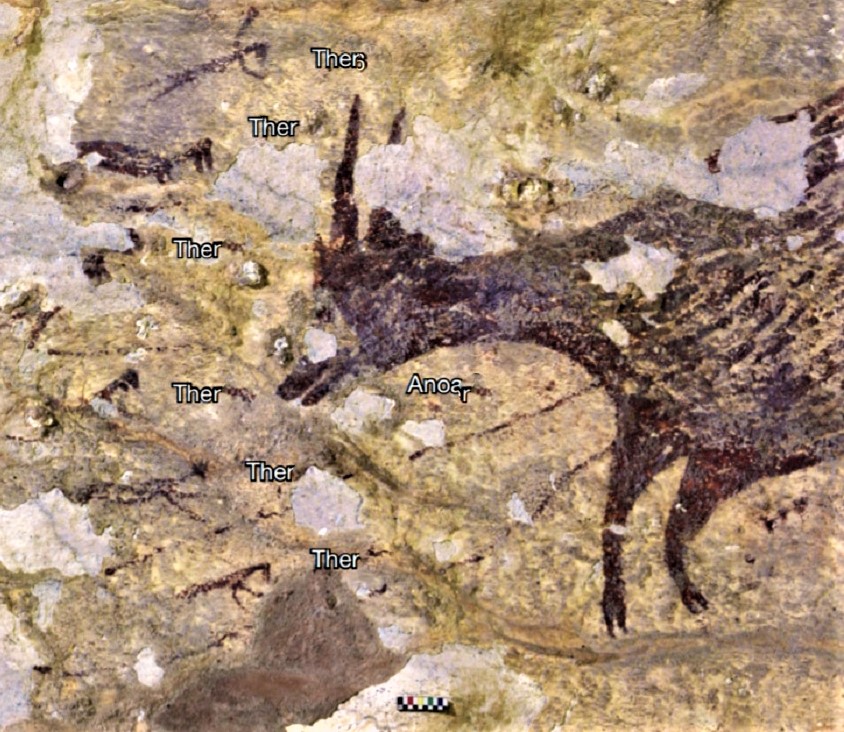 Some Archaeologists say it might also contain the oldest known religious images.

At this very moment, you're a participant in one of the things that makes us human: the telling and consumption of stories. It's impossible to say when our species began telling each other stories—or when we first evolved the ability to use language to communicate not only simple, practical concepts but to share vivid accounts of events real or imagined. But by 43,900 years ago, people on the Indonesian island of Sulawesi had started painting some of their stories in images on cave walls.

A newly discovered painting in a remote cave depicts a hunting scene, and it's the oldest story that has been recorded. And if Griffith University archaeologist Maxime Aubert and his colleagues are right, it could also be the first record of spiritual belief—and our first insight into what the makers of cave art were thinking.

Across a 4.5 meter (14.8 foot) section of rock wall, 3 meters (9.8 feet) above the floor of a hard-to-reach upper chamber of a site called Liang Bulu'Sipong 4, wild pigs and dwarf buffalo called anoa face off against a group of strangely tiny hunters in monochrome dark red. A dark red hand stencil adorns the left end of the mural, almost like an ancient artist's signature. Through an opening in the northeast wall of the cave, sunlight spills in to illuminate the scene.

Liang Bulu'Sipong 4 is a living cave, still being reshaped by flowing water, and layers of rock have begun to grow over the painting in spots. The minerals that form those layers include small traces of uranium, which over time decays into thorium-230. Unlike the uranium, the thorium isn't water-soluble and can only get into the rock via decay. By measuring the ratio of uranium-234 to thorium-230 in the rock, archaeologists can tell how recently the rock layer formed.

The deposits have been slowly growing over the hunting mural for at least 49,300 years, which means the painting itself may be even older than that. That makes the Liang Bulu'Sipong 4 mural the oldest record (that we know of) of an actual story. At first glance, it seems to suggest a game drive, in which people flush animals from cover and drive them toward a line of hunters with spears or other weapons. If Aubert and his colleagues are right about that, it means that somebody 44,000 years ago created a firsthand record of how they made a living.

A scene from legend?

But the oldest story ever recorded by human hands may be something more than a hunting record. "Some, or all, aspects of this imagery may not pertain to human experiences in the real world," wrote Aubert and his colleagues. Up close, the tiny hunters don't look quite human; many of them have strangely elongated faces, more like animal muzzles or snouts. One has a tail, and another appears to have a beak.

The figures could represent human hunters clad in skins or masks. Aubert and his colleagues, however, say they look more like therianthropes: human-animal hybrids that show up in cultures around the world, including in 15,500-year-old paintings in the Lascaux caves of France and a 40,000-year-old carved figure from Germany.

Whether they're human, animal, or a bit of both, the hunters are facing prey animals of monstrous or mythological proportions. In real life, an anoa stands about 100cm (39.4 inches) tall, and an Indonesian wild pig stands only 60cm (23.6 inches) tall. On the wall of Liang Bulu'Sipong 4, though, the creatures loom many times larger than the hunters arrayed against them. It looks like a scene out of a legend, not a dry record of another day's hunting.

And its presence suggests that Liang Bulu'Sipong 4 may have been a sacred, or at least important, place to the people who once lived in the area. Archaeologists found no trace of the usual debris of human life—stone tools, discarded bones, and cooking fires—anywhere in the cave or in the much larger chamber beneath it. That's no wonder: Liang Bulu'Sipong 4 is set in a cliff 20 meters above the valley floor, and one doesn't simply walk in.

"Accessing it requires climbing, and this is not an occupation site," Aubert told Ars. "So people were going in there for another reason."

The invention of fiction

Forty-four thousand years later, we have part of a story but no context; there's no way to know who the hunters or their giant prey were or exactly what they meant to the people of Sulawesi. The long-ago artist may have been memorializing the content of a spiritual leader's recent vision or a scene from a legend already well known to their people. The image may have conveyed something important about the connection between humans and animals or predator and prey, or it may have been an origin story or a dire warning.

But the Liang Bulu'Sipong 4 painting may provide the oldest hint about spiritual beliefs, and Aubert and his colleagues say it could contribute to the ongoing debate about how our species developed religion. The panel could have a lot to say about how and when hominins evolved the cognitive ability to think about myth and religion and about how human cultures developed shared beliefs about the supernatural.

At the moment, the leading ideas suggest that before we could develop religion, we had to develop the ability to think and talk about things that don't exist in the natural, physical world. We had to learn to describe and imagine not just things we had already seen, but things no one had ever seen—like therianthropes and giant wild animals. In other words, we had to invent the concept of fiction.

"The ability to invent fictional stories may have been the last and most crucial stage in the evolutionary history of human language and the development of modern-like patterns of cognition," wrote Aubert and his colleagues. 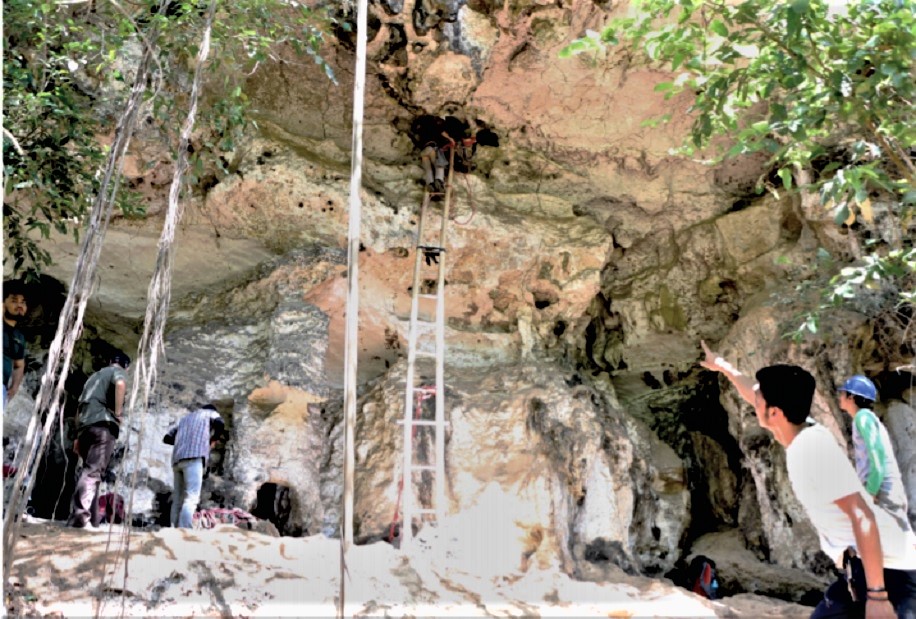 One thing the discovery definitely suggests is that the story of art, myth, and storytelling didn't start in Europe and spread to the rest of the world from there, as some anthropologists had once supposed. The oldest known cave art in the world is an abstract image, which seems to have been made by Neanderthals in Spain 65,000 years ago. But the oldest art that's clearly a picture of something is a 40,000-year-old painting of a wild cow from another Indonesian island, Kalimantan. That's about the same age as the oldest Homo sapiens abstract art in Europe. A painting of a wild pig in another Sulawesi cave comes in a close second at 35,400 years old.

The whole island of Sulawesi is a gallery of Pleistocene art; its karst geology has created a vast network of limestone caves, which ancient people were using as shelters by at least 50,000 years ago (probably closer to 65,000 years ago, based on evidence from elsewhere in Southeast Asia). Archaeologists have found paintings on the rock walls of at least 242 cave sites so far, but many—until recently including Liang Bulu'Sipong 4—remain unexplored and undocumented.

"We will continue to explore Sulawesi and the wider region for more early rock art," Aubert told Ars. The team also plans to date more rock samples from Liang Bulu'Sipong 4. "The dates that we have obtained so far are minimum ages, so the art could be much older. So perhaps new dating samples will reveal older age for this art," he explained.

But archaeologists may be racing against time and weather. At nearly every rock-art site in Sulawesi, they've noticed that the paint, which has held on for tens of thousands of years, is flaking away. "If you examine the photographs we have published of the rock-art scene at Leang Bulu' Sipong 4, you will notice how much of the art has flaked away," he told Ars. "We need funding to work with our Indonesian colleagues to figure out why this deeply ancient and globally significant art is exfoliating so quickly at almost every site and what to do about it."
Posted by Barbara Wells Sarudy at 4:00 AM