In Canada - Woman's Involvement in the Fur Trade 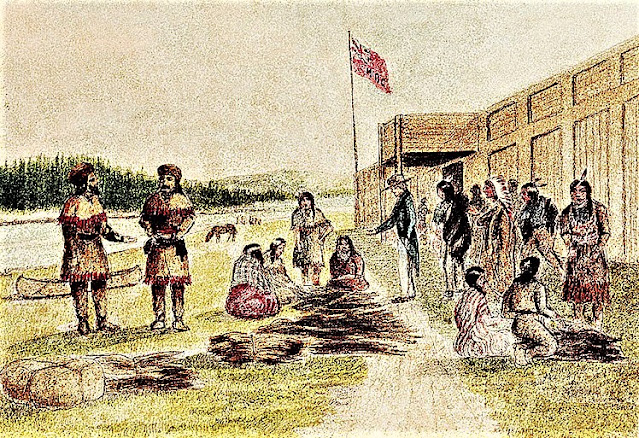 Women Fur Trading at Fort Nez Percé in 1841. Fort Nez Percés, later known as old Fort Walla Walla, was a fortified fur trading post on the Columbia River on the territory of modern-day Wallula, Washington. Despite being named after the Nez Perce people, the fort was in the traditional lands of the Walla Walla. Founded in 1818 by the North-West Company, after 1821 it was run by the Hudson's Bay Company until its closure in 1857.

In Canada - Woman's Involvement in the Fur Trade

by Mason McDowell at University College of the North

The University College of the North is an institution devoted to community & northern development & reflects the Aboriginal reality & cultural diversity of northern Manitoba.

The fur trade was one of the biggest economic trends in Canadian history. Even though much of the trading happened between European & Aboriginal men, women played a very interesting & an important part in the fur trade. From creating & strengthening relationships between the European & Aboriginal men, to helping navigate, dressing furs, even cooking & setting up camps, women had a big part in the fur trade. When it came to the actual act of trading & being on trade routes, many people believe that it was just between native men & European men, but in actuality women sometimes also travelled on trade routes trapping, preparing, & traded their own furs. While men dominated the fur trade, women played a very important role in the fur trade, often being the suppliers for their trader husbands, & some even going as far to participate in the trading as well.

When the European traders first came to North America “colonization was not envisaged”  by them, so the traders brought no white women from Europe over to North America. This made it much harder for the European traders to practice their own culture & start families in North America so “instead, the traders were forced to come to terms with an alien, nomadic culture,”  a culture that the Europeans traders’ own livelihoods depended on. The Aboriginals culture & way of life had given them “distinct advantages with coping with the wilderness environment,”  & the fur traders knew that having the knowledge of the land would be crucial to their survival in the harsh conditions of North America. The traders also knew that the Aboriginals had distinct & valuable techniques in hunting, trapping, tracking, & navigating. So, European men started turning to Aboriginal women for companions on their long journeys. The Aboriginal Women educated the European men with their ways of living on the land & practicing their own culture while, helping traverse & navigate the harsh wilderness of North America. 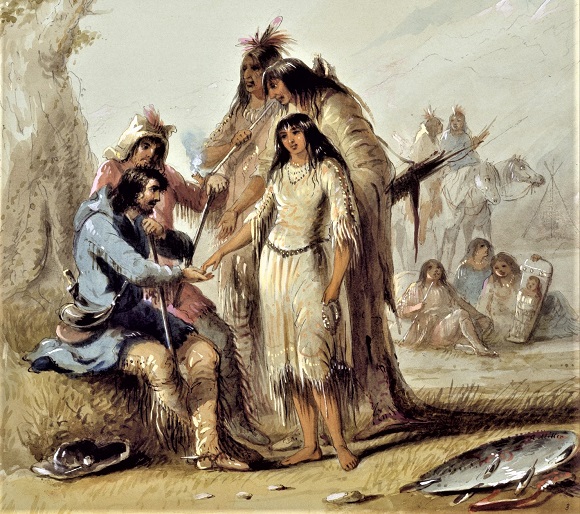 When it came to Aboriginal women & European men, their encounters together were not usually “casual promiscuous encounters, but the development of marital unions which gave rise to distinct family units.”  Even though “there were differences in attitudes & practices between the Europeans & the Aboriginals; the fur trade society developed its own marriage rite, marriage a la facon du pays, which combined both Aboriginal & European marriage customs.”  When a European man married an Aboriginal woman in fur trade society, the European men would gain & strengthen trade relationships with Aboriginal men, & would “secure the trade of the tribe or band”  that the Aboriginal woman belonged too. This tradition soon caught & became accustomed to European traders, with many marrying Aboriginal women to create the social ties to improve their access trade opportunities & gain better knowledge of the aboriginal culture & way of life. Many intermarriages between Aboriginal women & European traders became more & more popular, with both sides of the marriages having a lot to gain from the courtship. With the increased intermarriages the fur trade society began to grow, creating new & strengthening the existing relationships among traders & Aboriginals almost everyday.

Aboriginal women were also benefiting from the intermarriage during the fur trade, with the influx of European technology that they were enjoying the luxuries of goods from Europe & the courtships by the European men. Many Aboriginal women were anxious to keep trade flowing, so they could have more access & the ability to use more “European goods such as kettles, cloth, knives, needles, & axes to help alleviate their sometimes-onerous work roles.”  Their working roles often included cooking, preparing & dressing furs, & crafting clothing & snowshoes, & making other tools. During the early years of the fur trade “many Aboriginal tribes & bands actively encouraged the formation of marriage alliances their women & traders.”  In Aboriginal society “marriage was seen in an integrated social & economic context.”  So, the European traders & Aboriginals made an agreement that if the Aboriginals allowed European traders marry & begin families with their women the Aboriginals would have “free access to the trading posts & provisions.”  This would give the Aboriginals full trading capabilities at trading posts across British North America, & it would also give the Aboriginals more access to European technology. The European traders, in turn, would strengthen & gain better access to trade relationships with the Aboriginals, while simultaneously gaining knowledge of Aboriginal techniques & culture to further increases their profits. Even though Aboriginal men & European traders were more dominate when it came to being hunters & trappers, some Aboriginal women were trapping, preparing, & trading their own furs. Kees-Jan Waterman & Jan Noel outline that “fur transactions were the norm for people of both sexes”  rather than just being confined to men. When it came to the act of trapping itself “men were the hunters of beavers & larger game animals, & the women were responsible for trapping smaller fur-bearing animals, especially the martin whose pelts were highly prized.”  Aboriginal women & the Aboriginal population in general benefited greatly due to intermarriages in the fur trade, with gaining more access to trading posts & European technology, which greatly impacted their lives & made their traditional ways of hunting & fur preparing easier.

Even though white women did not come to the predominantly fur trading areas of British North America until later when the fur trade society was already greatly established, & when they did arrive, they also had great contributions to the fur trade as well. The white women played a largely subsidiary role in fur trade society often being compared to a modern-day house wife. The majority roles of white women who were married to traders were “as suppliers of food & other supplies,”  which means they often cooked & set up camp for the traders if they travelled with them, so that their trader husbands could focus on the trapping & hunting rather than setting up his camp & cooking meals. If a white woman did not travel with her trader husband, she often stayed at home to take care of the children, whilst the trader was out making money to support the family.  Even though white women did not serve the major role & exert the same impact as Aboriginal women did in fur trade society, they still made contributions by helping the traders on their long journeys for the business.

In conclusion, women were very impactful & important in fur trade society & were one of the reasons that the fur trade was as successful of & economic trend as it was. If women had not been as involved so much, many European traders would not have had such strengthened social relationships with Aboriginals tribes & bands at that time. The traders also wouldn’t have had the knowledge of the land & Aboriginal culture if it wasn’t for the intermarriages with the Aboriginal women. This also proves that major companies in the fur trade such as The Hudson’s Bay Company & The North West Company may not have been as successful as they were, with The North West Company outlining the many “economic advantages to be gained by forming alliances with Aboriginal women.”  Even if women didn’t travel on trade routes with their trader husbands, they were able to stay home & care for their families & raise the next generation of traders. In the end women really were one of the major reasons that the fur trade was as profitable & successful as it was, & greatly benefited both Europeans & Aboriginals alike.