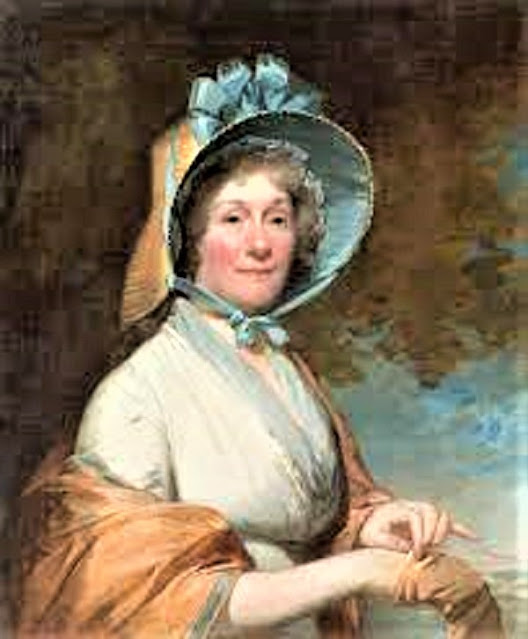 Henrietta Liston (1751-1828) was a British botanist. The National Library of Scotland has digitized her journals. Henrietta married diplomat Robert Liston when she was 44, & he was 53, on 27 February 1796.  After their wedding, they traveled directly down to London where Robert met with King George III, ahead of his posting to the United States in 1796.

They took up residence in Philadelphia, the capital. Genuinely curious about the New World, they began an extended trip from Philadelphia to Charleston, South Carolina in the fall of 1797. The couple also established friendships with George Washington & John Adams, of whom Henrietta's diaries contain favorable impressions.  She also praises Alexander Hamilton, as "lively & animated in his conversation, gallant in his manners & sometimes brilliant in his sallies."

Henrietta documented their trip in her journal, noting facts that she found interesting, the foods they ate, & their astonishment at the natural beauties, particularly the flora, of the countryside. Traveling the east coast of North America must have been a challenge for the 45-year-old Mrs. Liston & her 55-year-old husband.  She wrote:  On Christmas eve, the Listons reached Fayetteville, named after the Marquis de Lafayette who had fought on the side of the Americans in the Revolutionary War.It is a flourishing Town, upon a Branch of the Capefear River & nearly at the head of the navigation—before the War it was called Cross Creek.

We were visited by a Scotch Gentleman, named Donaldson, with whose family we passed Christmas day very agreeably. No doubt they were happy to spend the day with a fellow Scot, but Mrs. Liston does not give any details of the festivities. However, she does describe a particular meal she & her husband enjoyed en route.

Our most frequent food, & infinitely the best of its kind, was Pork & Corn bread, it happened to be the Season for killing Pork, it was fresh & most excellent meat,...always broiled upon the Coals, & when we happened to get a few fryed Eggs to it, it was the best food possible & with Corn bread—no other is known—baked upon a hoe, in general, & call hoe cake.

On New Year’s Eve, Henrietta & her husband arrived in Charleston, South Carolina, where they spent a week before returning to Philadelphia, receiving “very marked attentions” from the “polished Society” that characterized Charleston.

A book on her diaries & journals The Travel Journals of Henrietta Marchant Liston: North America & Lower Canada, 1796-1800, edited by L.V. North was published in 2014.