WAR THEN
Minerva (Athena in Greek) was one of the most important of the ancient Greek & Roman goddesses. She was originally a Goddess of War, hence her armor & spear. Her role later expanded to Goddess of War, Trade, Wisdom & the Arts. (Those duties including Trade & War surely reflect modern economic motives.)  She was fierce & brilliant. From 2C BC onwards, the Romans equated her with the Greek goddess Athena, Goddess of Music, Poetry, Medicine, Wisdom, Commerce, Weaving, Crafts, & Magic.
Artists in the 15-18C sometimes painted their clients as allegories or personifications, & often painters would put the faces of their patrons or sponsors on the bodies of the saints.  These came to be called donor portraits.
Allegorical portraits remained popular; & as time passed, they expanded to show the sitter as a goddess, or muse, or nymph in a rustic or garden setting.  These allegories grew to include strong portraits of Minerva wearing idealized attire, nothing like the clothing worn by actual women of the period.  Dressing scantily or provocatively would have been frowned upon if a proper lady was sitting for a realistic portrait, but if she were posing as an ancient goddess or muse, a little skin was acceptable.
INTERNATIONAL WAR NOW - RUSSIA INVADES THE UKRAINE
Russia has 800 miles of border on its West. In the decades following the collapse of the Soviet Union in 1991, one of the nations on its Western border, Ukraine, moved toward closer integration with Europe. When pro-Russian Ukrainian President Viktor Yanukovych tried to reverse that trend in 2014, protests swept him from power.
Having lost an ally, Vladimir Putin invaded & annexed the Ukrainian autonomous republic of Crimea. He also provoked separatist uprisings in Donetsk & Luhansk, two regions in eastern Ukraine; fighting between pro-Russian militias & the Ukrainian government continued there for years.
Running on a populist reform platform, Volodymyr Zelensky was elected president of Ukraine in 2019 with more than 70 percent of the vote.
In 2021 Putin ordered a buildup of troops along Russia’s border with Ukraine, & on February 22, 2022, after he announced the beginning of a “special military operation,” Russian forces invaded Ukraine.
at 6:00 AM

Did the First Americans Arrive via Land Bridge? This Geneticist Says No. 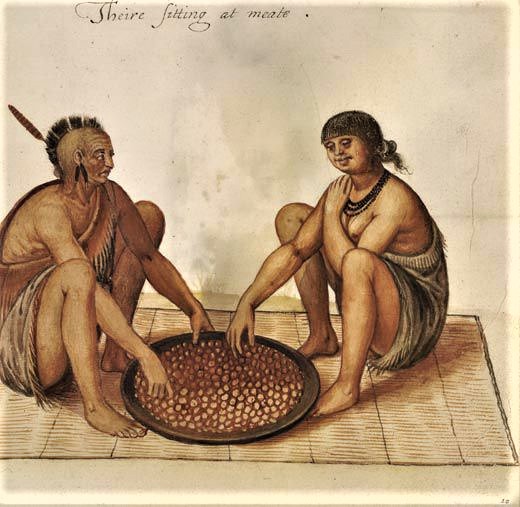 John White 1585 British Museum
A Non-Fiction Book Review from The New York Times By Jeremy DeSilva Feb. 8, 2022
A Genetic History of the Americas By Jennifer Raff
"It’s Anthropology 101. At the end of the last ice age, around 13,000 years ago, retreating glaciers created an inland corridor connecting Siberia to the Americas. People from northeast Asia crossed the Bering Strait land bridge and entered a new world. From there, these people — often given the name Clovis, after a New Mexico site that was rich with the distinctive stone tools they made — rapidly spread and successfully adapted to the various ecologies they encountered. All Native Americans can trace their ancestry back to these First Peoples.
"But, according to the University of Kansas anthropological geneticist Jennifer Raff, that’s not quite how it happened.
"In her new book, “Origin: A Genetic History of the Americas,” Raff beautifully integrates new data from different sciences (archaeology, genetics, linguistics) and different ways of knowing, including Indigenous oral traditions, in a masterly retelling of the story of how, and when, people reached the Americas. While admittedly not an archaeologist herself, Raff skillfully reveals how well-dated archaeological sites, including recently announced 22,000-year-old human footprints from White Sands, N.M., are at odds with the Clovis first hypothesis. She builds a persuasive case with both archaeological and genetic evidence that the path to the Americas was coastal (the Kelp Highway hypothesis) rather than inland, and that Beringia was not a bridge but a homeland — twice the size of Texas — inhabited for millenniums by the ancestors of the First Peoples of the Americas.
"Throughout, Raff effectively models how science is done, how hypotheses are tested, and how new data are used to refute old ideas and generate new ones.
"As a paleoanthropologist who works on fossils of ancient human ancestors living millions of years ago, I’ve never fully grasped why my colleagues who study the peopling of the Americas so fervently argue over a few thousand years. But Raff helps the reader understand why those several thousand years matter in terms of identifying source populations for the First Peoples of the Americas, the route they took (coastal versus inland) and the ecological challenges they faced. An informed and enthusiastic guide throughout, Raff takes the reader from underground caverns in Belize to a clean lab at the University of Kansas where ancient DNA is tediously teased from old bones. She explains difficult to understand concepts — geoarchaeology, coalescence times, biodistance — with well-placed sidebars. The book is richly referenced, and informative footnotes and endnotes give readers an opportunity to take a deeper dive if they wish.
"Our job as anthropologists is to breathe life into the past, to retell the stories of our ancestors and extinct relatives. We do not work with lifeless old bones or inert molecules but with the precious, fragmentary remains of once living, breathing, thinking individuals who laughed, cried, lived and died.
"As Raff explains, “We have promised to treat the small scraps of bone and teeth with respect and mindfulness that they are cherished ancestors, not ‘specimens'." Sprinkled through “Origin” are lovely vignettes of life thousands of years ago. Raff playfully imagines how the Yana River boys lost their deciduous teeth in a Siberian river 31,000 years ago. She poignantly fills a page with the sorrow a family must have felt as they placed the limp body of their 2-year-old boy into the earth in south-central Nevada 12,600 years ago. Through a combination of rigorous science and a universal humanity, Raff gives ancient people a voice.
"The first few chapters of “Origin” detail the long history of archaeology in the Americas. Here, we meet the usual characters — Thomas Jefferson, Ales Hrdlicka, Franz Boas — but also folks who were new to me. People like José de Acosta, a Jesuit priest who long ago predicted that the Indigenous peoples of the Americas were related to northeast Asian populations. And George McJunkin, a formerly enslaved man who made one of the most important archaeological discoveries of the 20th century at Folsom, N.M.
"Throughout “Origin,” Raff takes on pseudoscientific nonsense rooted in bigotry and colonial thinking. She eviscerates claims of “lost civilizations” founded on the racist assumption that Indigenous people weren’t sophisticated enough to construct large, animal-shaped or pyramidal mounds and therefore couldn’t have been the first people on the continent. She convincingly disposes of the Solutrean hypothesis of ancient Europeans in the Americas with logic and evidence. It puzzles her (and me) that people interested in this topic watch ill-informed “documentaries” on the History Channel when “the true histories, evident in genetics, oral traditions and archaeology, are exciting enough.”
"Given the fast and furious pace of discovery in this field, Raff is clear that not everyone will agree with her interpretations of the data. “All scientists must hold themselves open to the possibility that we could be wrong, and it may very well be that in five, 10 or 20 years, this book will be as out of date as any other,” she writes. “That possibility is what makes working in this field so rewarding.” That, she explains, is how science is done. 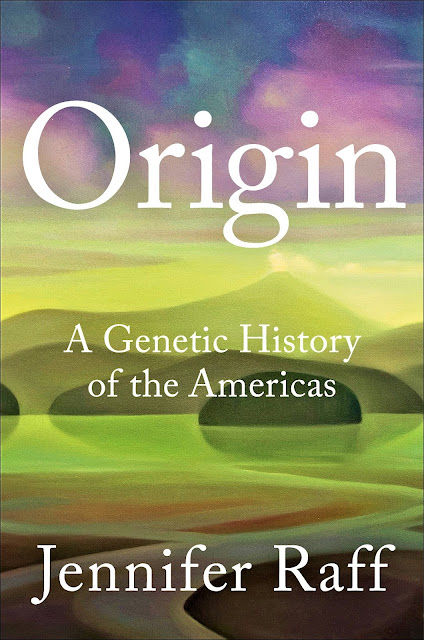 "While science is the most objective way of understanding the natural world that humans have ever devised, it is still done by an emotional, subjective primate — us. Raff celebrates science, but also calls attention to the many ways science has harmed Indigenous communities. “Origin” details mistrust between some Native communities and helicopter scientists who have swooped into their lands and exploited them for their DNA without inviting input and participation from all stakeholders. The hashtag #decolonizescience looks good on Twitter and the concept sounds good in grants, but it rings hollow unless it is put into practice. Raff provides a road map for how to do this and convincingly argues why this must be the future of our science. In fact, “Origin” opens with the discovery of 10,000-year-old human bones from Shuká Káa Cave, Alaska, and details the constructive partnerships, built on transparency and trust, that emerged between scientists, Indigenous communities and federal agencies.
"My only quibble with this outstanding book is that we don’t learn who Raff herself is and how she personally has contributed to this work through her scholarship until halfway through “Origin.” At the end of the book, she describes herself as “one obscure researcher from a small lab.” To be sure, there are much bigger labs than hers, but I think she’s being too modest. Jennifer Raff is a well-published scholar and accomplished scientific communicator who has contributed important insights into the genetic history and movement patterns of Indigenous Americans. She is at the forefront of a culture change in our science. And now she has written the book anyone interested in the peopling of the Americas must read."
Jeremy DeSilva is the author of “First Steps: How Upright Walking Made Us Human.”
at 4:00 AM