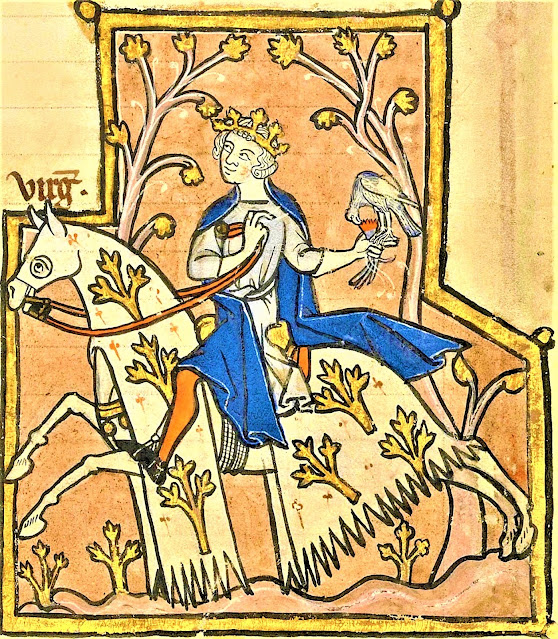 Month of May (detail) Pee. Brugge (Belgium), 14C. Illuminated latin manuscript on parchment. Origin: Benedictine Abbey of Notre Dame of Montebourg. now at Getty Center, Los Angeles, CA
European manuscript Illuminations began at end of the 4C, as Christianity was spreading.  The need to illustrate books usually developed with a style specific to the region & civilization. In Western Europe, from the 6C until the 12C, the illustrated manuscript was mainly religious, created by Christain monks copyists (usually the scholars of their area) in abbeys. Towards the 13C with the development & growth of European universities & administrations, the demand for books was increasing & lay workshops were created.  During the 10 centuries of illuminations in Europe, several styles emerged : Island style (British Isles) & Merovingian (before the 9C), Carolingian style (9-10C), Romanesque style (10-12C), Transitional period (13C), Gothic style (14-16C). At the end of the 15C the invention of printing greatly reduced the production of  books painted by the human hand.
For more information, see the next posting.
at 4:30 AM