Spring 2022 at Longwood Gardens in Pennsylvania 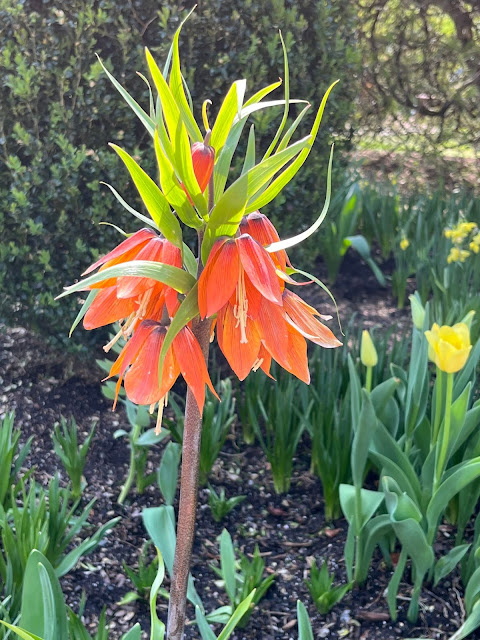 There have been many stewards of the land that is now called Longwood Gardens. For centuries, the native Lenni Lenape tribe fished the streams, hunted its forests, & planted its fields. Evidence of tribe's existence is found in quartz spear points that have been discovered on & around the property.
In 1700, a Quaker farmer named George Peirce purchased 402 acres of this English-claimed land from William Penn’s commissioners. Over the next several years, George & his descendants cleared & farmed the rich land that would one day become Longwood Gardens. In 1730, one of George’s sons, Joshua, built a brick farmhouse that, now enlarged, still stands today.
Known as Peirce’s Park, the land became a popular destination for visitors. However, due to declining interest by the family, the trees came under threat of being cut down by a local lumber company. Pierre du Pont stepped in & bought the land to preserve it.
In 1798, George’s twin great-grandsons, Samuel & Joshua, actively pursued an interest in natural history & began planting an arboretum that eventually covered 15 acres. The collection included specimens from up & down the Eastern seaboard & beyond. By 1850, the land had become one of the best collections of trees in the country. The arboretum boasted one of the finest collections of trees in the nation & had become a place for the locals to gather outdoors – a new concept that was sweeping America at the time. Family reunions & picnics were held at Peirce's Park in the mid to late 19C.
As the 19C US fought its way to the 20C, the heirs to the land lost interest in property & allowed the arboretum to deteriorate. The property passed through several hands in quick succession, until a lumber mill operator was contracted to remove the trees from a 41-acre parcel within the original lands in early 1906.
It was this threat that moved one man to take action. In July 1906, 36-year-old Pierre du Pont purchased the farm primarily to preserve the trees. But he didn’t stop there. Much of what guests see today – the beauty & majesty & magic of the Earth that is Longwood Gardens – was shaped by the remarkable vision & versatility of Pierre du Pont.    See: Longwood Gardens History for more.
“Beauty awakens the soul to act.” - Dante Alighieri (1265-1321)
at 4:00 AM