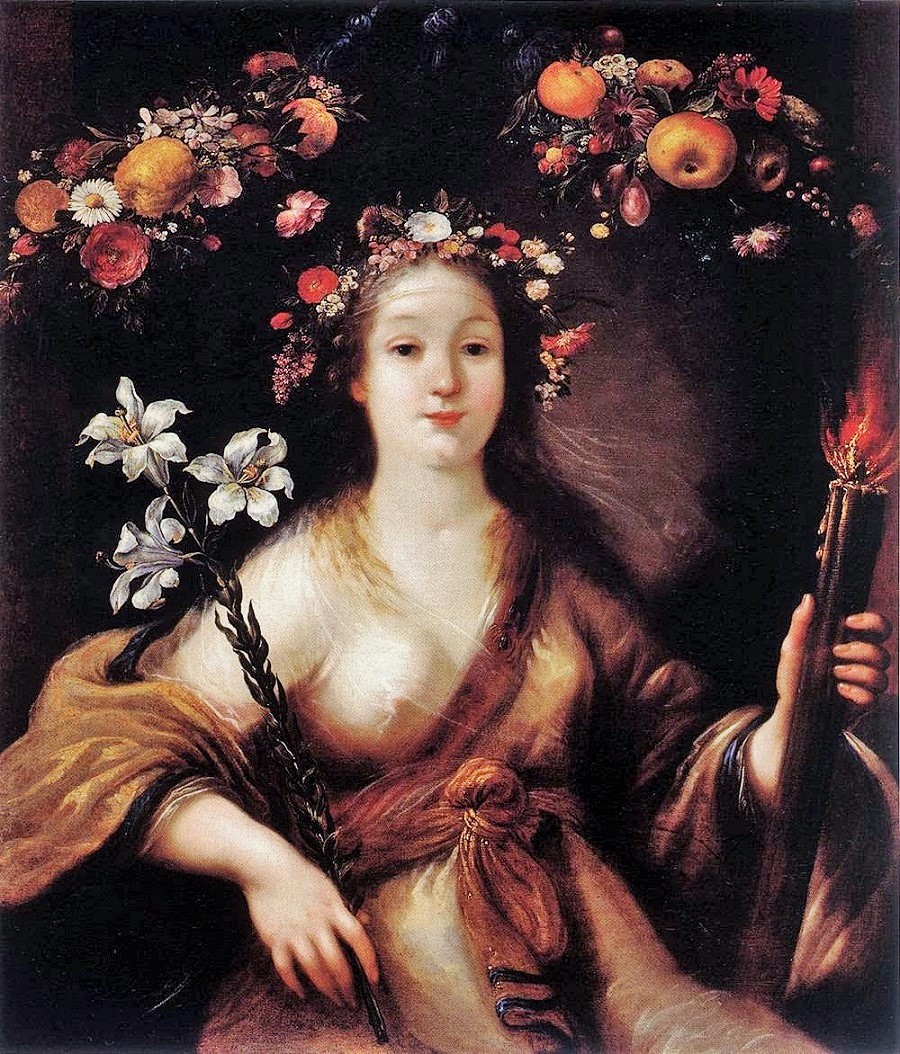 1630s Claude Vignon (1593-1670)  - Goddess Flora
Flora in Roman mythology, was goddess of spring-time & flowers, later identified with the Greek Chloris. Her festival at Rome, the Floralia, instituted 238 B.C. by order of the Sibylline books & at first held irregularly, became annual after 173. It lasted 6 days (April 28-May 3), the 1st day being the anniversary of the foundation of her temple.
The Floralia was a public festival to honor the goodwill of the goddess Flora. Created in the 6th century BC by the Romans, it took place in spring  & lasted 6 days, & consisted of games & theatrical performances. Chariot races & circus games took place & everywhere were the symbols of Flora. It was traditional to have goats & hares scampering about the landscape where flowers of lupines, beans, & vetch were scattered about. The celebrating Romans held bouquets of flowers & wore wreaths of flowers around their necks or in their hair. In art Flora was represented as a beautiful maiden, bedecked with flowers. The term “flora” became used in botany collectively for the plant-growth of an area.
See Primary Sources:
Ovid, Fasti V. 193-212
Macrobius, Saturnalia I.10.11-14
Lactantius, Divinae institutions I.20.6-10
Tacitus, Annals, ii. 49
and
Ovid, Fasti, Book 4; T.P. Wiseman, The Myths of Rome (University of Exeter Press, 2004).
Robert Turcan, The Gods of Ancient Rome (Routledge, 2001; originally published in French 1998)
H.H. Scullard, Festivals and Ceremonies of the Roman Republic (Cornell University Press, 1981)William Warde Fowler, The Roman Festivals of the Period of the Republic (London, 1908)
at 6:00 AM