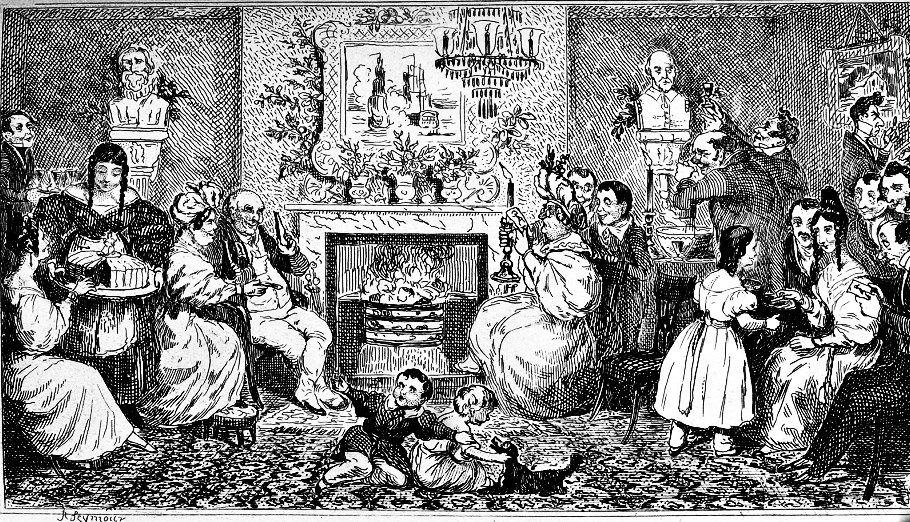 In 1835, Leigh Hunt published an account of Twelfth Nights past in his London Journal.
Christmas Goes out in Fine Style:  "Christmas goes out in fine style,—with Twelfth Night. It is a finish worthy of the time. Christmas Day was the morning of the season; New Year’s Day the middle of it, or noon ; Twelfth Night is the night, brilliant with innumerable planets of twelfth cakes. The whole island keeps court; nay, all Christendom. All the world are kings & queens. Everybody is somebody else, & learns at once to laugh at, & to tolerate, characters different from his own, by enacting them. Cakes, characters, forfeits, lights, theatres, merry rooms, little holiday faces, & last not least, the painted sugar on the cakes, so bad to eat but so fine to look at, useful because it is perfectly useless except for a sight & a moral,—all conspire to throw a giddy splendor over the last night of the season, & to send it to bed in pomp & colors, like a Prince.

"Twelfth-cake & its king & queen are in honor of the crowned heads who are said to have brought presents to Jesus in his cradle—a piece of royal service not necessary to be believed in by good Christians, though very proper to be maintained among the gratuitous decorations with which good & poetical hearts willingly garnish their faith. “The Magi, or Wise Men, are vulgarly called the three kings of Collen (Cologne). The first, named Melchior, an aged man with a long beard, offered gold; the second, Jasper, a beardless youth, offered frankincense; the third, Balthaser, a black or moor, with a large spreading beard, offered myrrh.” This picture is full of color, & has often been painted. The word Epiphany (Eirifaitiat, ivperapparllio, an appearance from above), alludes to the star which is described in the Bible as guiding the Wise Men. In Italy, the word has been corrupted into Beffania, or Beffana, (as in England it used to be called Piffany) ; & Beffana, in some parts of that country, has come to mean an old fairy, or Mother Bunch, whose figure is carried about the streets, & who rewards or punishes children at night by pulting sweetmeats, or stones & dirt, into a stocking hung up for the purpose near the bed’s head. The word Beffa, taken from this, familiarly means a trick or mockery put upon anyone — to such base uses may come the most splendid terms. Twelfth Day, like the other old festivals of the church of old, has had a link of connection found for it with Pagan customs, & has been traced to the Saturnalia of the ancients, when people drew lots for imaginary kingdoms. Its observation is still kept up, with more or less ceremony, all over Christendom. In Paris, they enjoy it with their usual vivacity. The king there is chosen, not by drawing a paper as with us, but by the lot of a bean which falls to him, & which is put into the cake; & great ceremony is observed when the king or the queen ” drinks;” which once gave rise to a jest, that occasioned the damnation of a play of Voltaire’s. The play was performed at this season, & a queen in it having to die by poison, a wag exclaimed with Twelfth Night solemnity, when her Majesty was about to take it, “The queen drinks.” The joke was infectious; & the play died, as well as the poor queen.

"Many a pleasant Twelfth-Night have we passed in our time; & such future Twelfth-Nights as may remain to us shall be pleasant, God & good-will permitting; for even if care should be round about them, we have no notion of missing these mountaintops of rest & brightness, on which people may refresh themselves during the stormiest parts of life’s voyage.

"We spent a Twelfth Night once, which, by common consent of the parties concerned, was afterwards known by the name of The Twelfth Night. It was doubted among us, not merely whether ourselves, but whether anybody else, ever had such a Twelfth Night;

"The evening began with such tea as is worth mention, for we never knew anybody make it like the maker. Dr Johnson would have given it his placidest growl of approbation. Then, with piano-forte, violin, & violoncello, came Handel, Corelli, & Mozart. Then followed the drawing for king & queen, in order that the “small infantry” might have their due share of the night, without sitting up too too-late (for a reasonable “too-late” is to be allowed once & away). Then games, of all the received kinds, forgetting no branch of Christmas customs. And very good extempore blank verse was spoken by some of the court {for our characters imitated a court), not unworthy of the wit & dignity of Tom Thumb. Then, came supper, & all characters were soon forgotten but the feaster’s own; good & lively souls, & festive all, both male & female,—with a constellation of the brightest eyes that we bad ever seen met together…

"The bright eyes, the beauty, the good humor, the wine, the wit, the poetry (for we had celebrated wits & poet’s among us, as well as charming women), fused all hearts together in one unceasing round of fancy & laughter, till breakfast,—to which we adjourned in a room full of books, the authors of which might almost have been waked up & embodied, to come among us. Here, with the bright eyes literally as bright as ever at six o’clock in the morning (we all remarked it), we merged one glorious day into another, as a good omen (for its was also fine weather, though in January) ; & as luck & our good faith would have it, the door was no sooner opened_ to let forth the ever-joyous visitors, than the trumpets of a regiment quartered in the neighborhood struck up into the morning air, seeming to blow forth triumphant approbation, & as if they sounded purely to do us honor, & to say ” You are as early & untired as we.”
at 4:01 AM