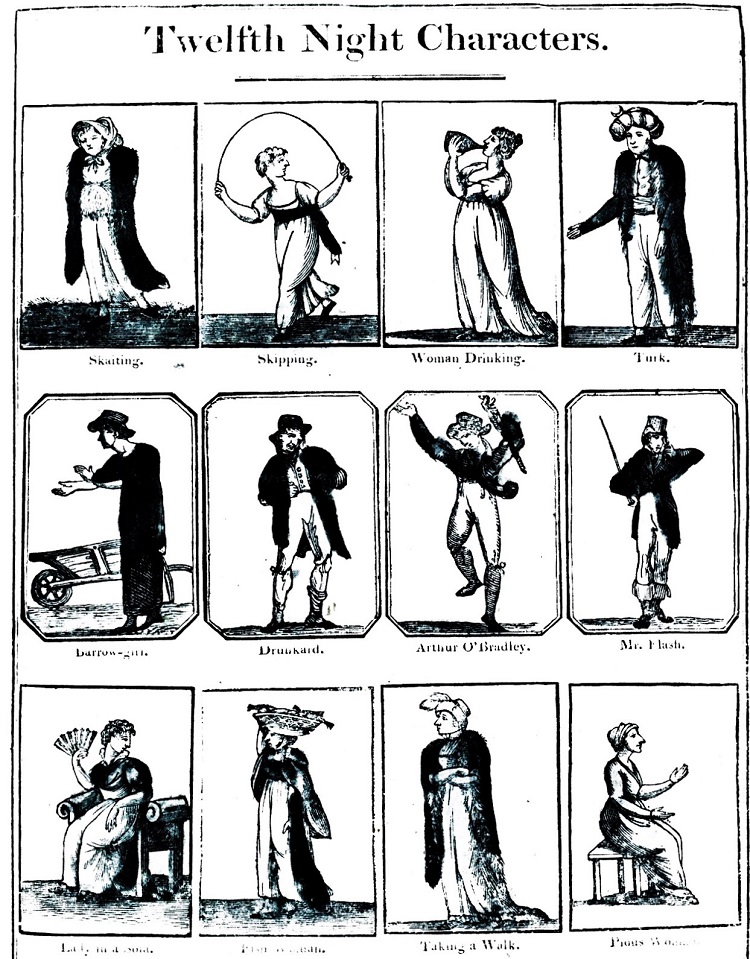 During the late 1700s, sets of characters were available to purchase from enterprising stationers.

In the late 17C, the English diarist Samuel Pepys (1633-1703) described his enjoyment of a new custom whereby Twelfth Night merrymakers drew slips of paper from a hat on which were written the names of characters found at the bean king's court. They were expected to impersonate this character for the rest of the evening. In this way everyone present at the celebration, not just the king & queen, got into the act. By the end of the 18C this innovation had almost completely replaced the earlier custom of planting a bean & a pea inside the Twelfth Night cake. In fact, it became so popular with ordinary folk that, by the end of the 18C, shops sold packets of cards & sheets of paper with names & drawings of characters printed on them. The absurd names given to these characters served to describe their exaggerated personalities. Examples included Sir Tunbelly Clumsy, Sir Gregory Goose, & Miss Fanny Fanciful.

One anonymous writer in the Universal Magazine of 1774 wrote: "I went to a friend's house in the country to partake of some of those innocent pleasures that constitute a Merry Christmas; I did not return until I had been present at drawing King and Queen, and eaten a slice of the Twelfth Cake.....A noble cake was produced, and two bowls, containing the fortunate chances for the different sexes. Our host filled up the tickets; the whole company, except for the King and Queen, were to be ministers of state, maids of honour, or ladies of the bedchamber. Our kind host and hostess, whether by accident or design, became King and Queen. According to Twelfth Day law, each party is to support their character until midnight."
at 4:03 AM