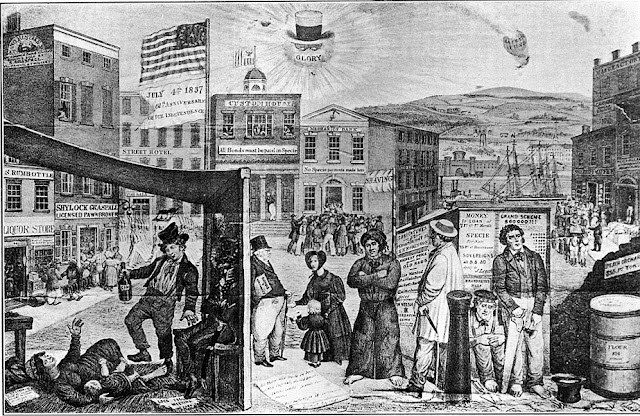 1837 Cartoon of a 4th of July celebration
This chronology offers a glimpse at how The 4th of July was celebrated with sometimes tragic results in 19C America.  Some of these celebrations turned into unexpected calamities

1815- In New York, a group of "patriotic tars" tries to "haul down the British colors" but they are dispersed by the police.

1831- Fourth of July celebrations near Washington DC, going nearly unnoticed, A tribe of Pequoad indians celebrate the Fourth of July with a series of war dances at a wigwam, south of Alexandria, Va.

1840  In Portsmouth, N.H., a large pavilion erected in the form of an amphitheatre for 4th of July celebrations collapses throwing nearly a 1,000 people to the ground, resulting in many injuries but no deaths.

1841 At Parrott's Woods, near Georgetown (D.C.), the speaker's platform collapses, throwing celebraties D.C. Mayor William W. Seaton, George Washington P. Custis, and others dignitaries to the ground, but no one is injured.

1843- In Poughkeepsie, N.Y., a church burns to the ground as a result of a firecracker "carelessly thrown by a boy."

1845- In Washington, D.C., on the grounds south of the Executive Mansion, 12 rockets are accidentally fired into the crowd, killing James Knowles and Georgiana Ferguson and injuring several others.   In Ithaca, N.Y., 3 persons are killed by an exploding cannon.

1853-  Some 500 residents of Baltimore go on an excursion to Annapolis, MD., and while there, some of them fight with a group of Annapolitans resulting in 2 persons killed, and several injured.

1854-  The mayor of Wilmington, Delaware, is mobbed by a group of angry citizens after putting City Council member Joshua S. Valentine in jail for setting off firecrackers.

1855- In Worcester, Mass., angry citizens demonstrate against the city officials there who had refused to fund the town's Fourth of July celebration; in Columbus, Ohio, a parade of firemen, Turners and other societies, turns into a huge riot, resulting in one dead and several injured.

1856- The first Fourth of July celebration "west of the Big Woods" in Minnesota occurred and consisted of a bear hunt by several hunters. No report of any bears being killed or maimed.

1857- In Boston at the Navy Yard, the frigate Vermont is set on fire when "a wad" from an artillery salute "was blown on board of the hull"

1858-  At Niagara Falls, N.Y., at the celebration of the opening of the hydraulic canal, the dam gives way and water floods the area, but no one is critically injured.
Alfred Cornelius Howland (American painter, 1838-1909) Fourth of July Parade

1860- In Jamestown, N.Y., the Museum Society, made up of children between the ages of 10 and 15, take charge of the celebration there, because most of the adults are not in town, but in Randolph, N.Y., celebrating without their children.

1863-  In Gettysburg, Pa., as the Rebel troops are making their escape from the great battle just fought there, when someone throws firecrackers among the ambulances carrying the wounded and causes a stampede of the horses and panic among the troops.

1864- Secretary of State William Seward, riding in a carriage celebrting the 4th, narrowly avoids fatal injury when a rocket, set off by a young boy, strikes him above his eye.

1866- One of the worst fires ever to occur on Independence Day takes place in Portland, Maine, the blame was placed on an errant firecracker.

1867- In Washington DC, two members of the House of Representatives are arrested for violating a city ordinance prohibiting the setting off of firecrackers in the public streets. And a freight train carrying a "large quantity of fireworks" on route to a celebration in Springfield, MA derails near Charleston and the train is completely wrecked.

1868-  In Groton, Mass., the Lawrence Academy, is destroyed by fire due to a firecracker "thrown on the piazza by a boy." In Buffalo, NY, St. John's Episcopal Church burns to the ground due to a rocket that exploded in its spire.

1870-  In Marysville, Pa., at a picnic held by black military companies, a riot ensues with several persons shot.

1875- Several blacks and possibly one white are killed when a fray erupts at a Fourth of July celebration held at the Court House in Vicksburg, Miss.

1876- In Hamburg, South Carolina, an incident results in a massacre of African-Americans occurs.

1880- The first Fourth of July celebration held in Uintah County, Utah, occurs and "only eight men and women were present."

1884- In Swan City, Colorado, angry miners blow up the town's Post Office, because they are not supplied with fireworks.
July 4th Parade with Goat Cart - Hayne Street in Monroe, NC

1893- In the Battery in New York, a gunner is put under arrest for inaccurate counting of a 21-gun national salute in which 23 rounds were fired.

For much, much more on July 4th celebrations, see:
The Fourth of July Encyclopedia by James R. Heintze (2007)
at 4:22 AM