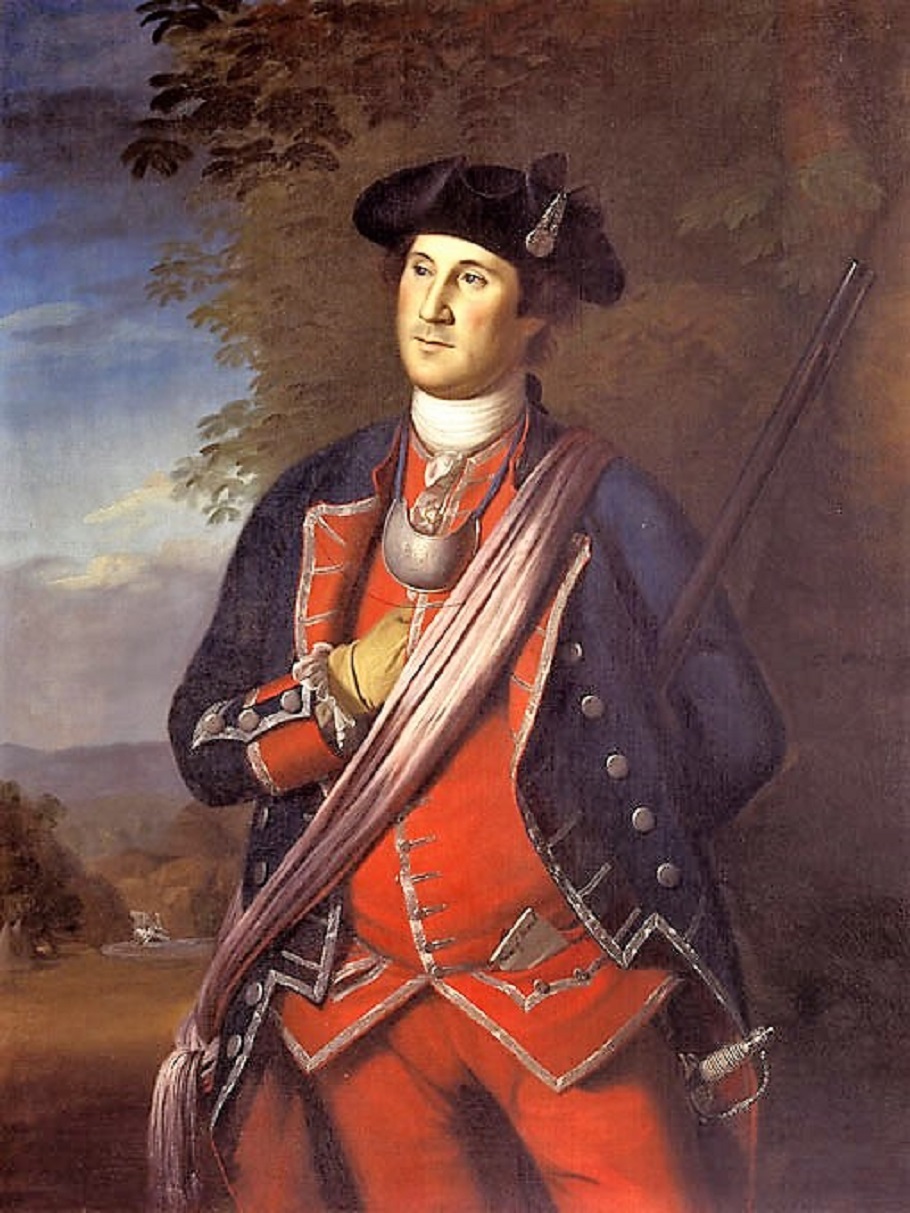 By the summer of 1776, American & British forces had been engaged in armed conflict for 15 months. The Declaration came 442 days after the opening shots of the American Revolution at the Battles of Lexington & Concord in Massachusetts.
General George Washington was Commander of the Continental Army defending New York City on July 4, 1776; when the Declaration of Independence changed the purpose & nature of that conflict. On the evening of July 9, 1776, thousands of Continental soldiers who had come from Boston to defend New York City from the British marched to the parade grounds in Lower Manhattan. Washington had ordered them to assemble promptly at six o'clock to hear a declaration approved by the Continental Congress calling for American independence from Great Britain. Only 19 years old in the summer of 1776, Alexander Hamilton (1757-1804) was a face in the crowd of the Continental Army in New York City, when the Declaration of Independence was drafted, approved, & signed.

Mount Vernon tells us that Washington, like many others in the army, had been waiting for this declaration for some time. He had grown impatient with representatives who hoped for reconciliation with the mother country. To those who believed peace commissioners were on their way to the colonies to effect this reconciliation, Washington responded that the only people heading to the colonies were Hessian mercenaries. Even as his men waited to hear the proclamation read aloud to them, Washington knew that thousands of Hessians & even more redcoats were landing on Staten Island, preparing for an attack on New York.

The Continental Congress had voted for independence on July 2. Two days later on July 4, a declaration explaining the reasons for independence, largely written by Thomas Jefferson, had also been adopted.  Jefferson was credited with writing the first draft, but the "Committee of Five" actually worked on  it, including: Thomas Jefferson(1743-1826), Benjamin Franklin (1706-1790), Robert Livingston (1746-1813), John Adams (1735-1826) & Roger Sherman (1721-1793).
Washington received official notification when a letter dated July 6 arrived from John Hancock (1737-1793), the president of the Continental Congress, along with a copy of the declaration.

Hancock explained that Congress had struggled with American independence for some time, & even after making this momentous decision many members were worried about its consequences. He concluded that Americans would have to rely on the "Being who controls both Causes & Events to bring about his own determination," a sentiment which Washington shared.  For the commander-in-chief, who needed to lead his untrained army against Great Britain, the decision for independence came as welcome news, especially since his men would now fight not merely in defense of their colonies but for the birth of a new nation.

Washington sent out orders that all the troops should be assembled on their parade grounds at 6pm on July 9th. The parade grounds were on New York's Commons, which is very near today's City Hall. As Washington's soldiers stood ready for the brigadiers & colonels of their regiments to read the Declaration of Independence, they first heard words written by their commander. Washington explained that Congress had "dissolved the connection" between "this country" & Great Britain & declared the "United Colonies of North America" to be "free & independent states."

With hundreds of British naval ships occupying New York Harbor, revolutionary spirit & military tensions were running high. Commander Washington had the document read aloud in front of City Hall. Numerous citizens came out for the reading as well, which sparked a celebration through the streets. Part of the crowd, including many soldiers, rushed to the Bowling Green where a large equestrian statue of King George III stood. Lieutenant Isaac Bangs (1752-1780) wrote a description of the statue in his journal: “Near the Fort, is the Equestrian Statue of King George … The Man is represented about 3 feet larger than a natural Man; the Horse, in proportion, both neatly constructed of Lead gilt with Gold raised on a Pedestal of White Marble, about 15 feet high, enclosed with a very elegant Fence about 10 feet high; the enclosure was oval.”

The 4,000 pound lead statue was torn down. The iron fence surrounding the Green had posts topped with little crowns, all of which were sawed off as well. The horse statue was cut in pieces. The crowd hacked King George's head off of the statue. After the statue was broken up, Captain Oliver Brown's (1753-1846) troops hoisted the lead pieces, except the head, onto wagons & headed for a schooner which delivered it to the foundry at Litchfield, Connecticut to be melted down & transformed into musket balls. Washington expressed displeasure at the destruction of property, writing in his diary the next day he hoped in the future people would leave this sort of thing "to the proper authorities."  Pulling down a statue of the King was a symbolic gesture indicating that the time had come to change from the rule of a monarchy to the rule of a democracy.

George Washington issued these General Orders, July 9, 1776. "The Hon. The Continental Congress, impelled by the dictates of duty, policy & necessity, having been pleased to dissolve the Connection which subsisted between this Country, & Great Britain, & to declare the United Colonies of North America, free & independent States: The several brigades are to be drawn up this evening on their respective Parades, at Six OClock, when the declaration of Congress, shewing the grounds & reasons of this measure, is to be read with an audible voice. The General hopes this important Event will serve as a fresh incentive to every officer, & soldier, to act with Fidelity & Courage, as knowing that now the peace & safety of his Country depends (under God) solely on the success of our arms: And that he is now in the service of a State, possessed of sufficient power to reward his merit, & advance him to the highest Honors of a free Country."

Washington wrote to the  Continental Congress, New York, July 10, 1776. "Sir: I am now to acknowledge the receipt of your two favors of the 4th & 6th instants, which came duly to hand, with their important inclosures. I perceive that Congress have been employed in deliberating on measures of the most interesting Nature. It is certain that it is not with us to determine in many instances what consequences will flow from our Counsels, but yet it behoves us to adopt such, as under the smiles of a Gracious & all kind Providence will be most likely to promote our happiness; I trust the late decisive part they have taken, is calculated for that end, & will secure us that freedom & those priviledges, which have been, & are refused us, contrary to the voice of Nature & the British Constitution. Agreeable to the request of Congress I caused the Declaration to be proclaimed before all the Army under my immediate Command, & have the pleasure to inform them, that the measure seemed to have their most hearty assent; the Expressions & behaviour both of Officers & Men testifying their warmest approbation of it. I have transmitted a Copy to General Ward at Boston, requesting him to have it proclaimed to the Continental Troops in that Department...If our Troops will behave well, which I hope will be the case, having every thing to contend for that Freemen hold dear, they will have to wade thro' much Blood & Slaughter before they can carry any part of our Works, if they carry them at all; & at best be in possession of a Melancholly & Mournfull Victory. May the Sacredness of our cause inspire our Soldiery with Sentiments of Heroism, & lead them to the performance of the noblest Exploits. With this Wish, I have the honor to be, etc."

Washington ordered that all Continental Army soldiers hear the document read, but the reading required sufficient copies to be made & distributed to the headquarters of the various Continental Army commands. Even with dispatch riders, the troops had to wait to celebrate the Declaration until Continental regiments in the faraway south could actually hear the momentous words. The Declaration made it to Captain Joseph Bloomfield (1753-1823) of the 3rd New Jersey Continental Regiment on July 15th. He recorded the orders of the day in his journal, which read: "The Declaration of Independency being read, the whole present signifyed their hearty & sincere Approbation by Three Cheers and cheerfully drinking the following Patriotic Toastes, Harmony, virtue, Honor and all Prosperity to the free and independent United States of America, Wise Legislatures, brave & Victorious Armies, both by Sea & Land to the American States."
It took until August 5th, for the text of the Declaration to be read in South Carolina. Henry Drayton (1742-1779), in John Drayton's (1767-1822)Memoirs of the Revolution¸ stated that it was received in Charleston "with the greatest joy" by "all officers civil and military, making a grand procession in honor of the event."

General Washington believed that the Declaration would serve as a "fresh incentive" for his men to stay committed to the fight against Great Britain. His troops were now fighting for the birth of a new nation. Washington also knew that the only countries with the motivation & the military & naval capabilities to defeat Britain were France & Spain.

While Washington & John Adams & Thomas Jefferson certainly intended to motivate the troops & the early American colonials, they also hoped that the Declaration of Independence would spur the French & Spanish to join the battle. And they did.
Comte of Vergennes (1719-1787), foreign minister of France, directed the resulting European alliance both with America & Spanish minister Conde de Floridablanca (1728-1808).
The French admiral the Comte de Grasse (1722-1788) kept the British from reinforcing the usually successful British General Charles Cornwallis (1738-1805) in 1781 Virginia.
And Jean Baptiste Donatien de Vimeur, Comte de Rochambeau, (1722-1807) commander of all French forces in America during the War for Independence, actively assisted American military leaders & troops. Washington & Rochambeau covered 680 miles of roads with the Continental Army under the command of Washington & the Expédition Particulière under the command of Rochambeau during their 1781 march from Newport, Rhode Island, through New England, Pennsylvania, & Maryland to victory at Yorktown, Virginia.
at 4:02 AM