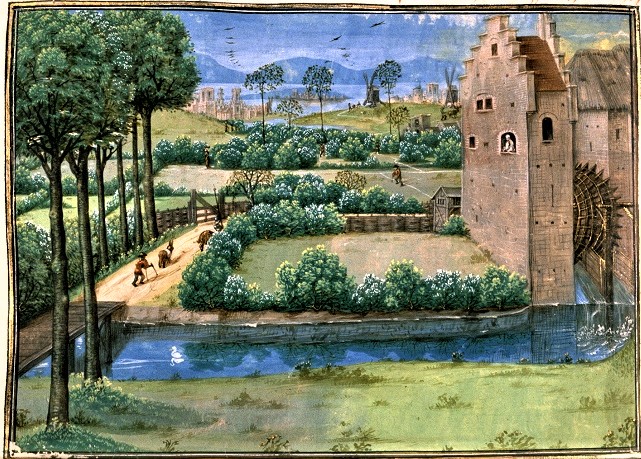 Landscape with a Watermill, Image taken from Le Tresor des Histoires: a universal history from the Creation to the time of Pope Clement VI. Treasure of Stories (15th C) - BL Cotton MS Augustus V. British Library - Cotton ms Augustus V Technically, the mill evolved a lot during the Middle Ages. The mechanisms were being used for increasingly diverse functions & the variety of hydraulic installations associated with them was growing.
Mostly intended for wheat, they were equipped with horizontal wheels trained by a pirouette (in France they are found in Occitania, Basque Country, Corsica & Finistere), more commonly vertical (receiving water below or above). The latter, the most powerful, were also the most expensive because of the gear they were equipped with. They are all settled on the bank of a stream, or on a boat (newmill). Hydraulic force-activated mussels could grind wheat but also crush eye seed, tinctorial plants, crush ore.
Translated by Enluminures Europe - VIe - XVIe s. - lluminated Manuscripts Europe
Plants, Gardens,& Landscapes in Illuminated Manuscripts 6C -16C
Illuminations date back to the end of the 4C. Codex, the 1st type of manuscript book replaced the prior written "paper" or parchment roll. The need to illustrate books usually developed with a style specific to each distinct region, civilization & time period. This function, "illuminare" in Latin, was mostly decorative & ornamental at this time & often reflected the myths of times passed.
In Western Europe, from the 6C until the 12C, the illustrated manuscript was mainly religious, created by monk copyists (usually the main scholars of the particular order) in abbeys to spread Christianity. After the Fall of the Roman Empire, Christian monestaries were often the center of
social, medical, &  religious activities for the local populations.
Towards the 13C, with the development of universities; the demand for books increased, & lay workshops were created. The art of illumination became a craft in its own right. At the end of the 15C, the invention of the Western printing press quickly reduced the time-consuming production
of books copied & painted by the hand of mankind.
During the 10 centuries of illuminations in the Middle Ages in Europe, several styles evolved: Island Style (British Isles) & Merovingian (before the 9C), Carolingian style (9-10C), Romanesque Style (10-12C), Transitional Period (13C), Gothic Style (14-16C).
at 1:00 AM