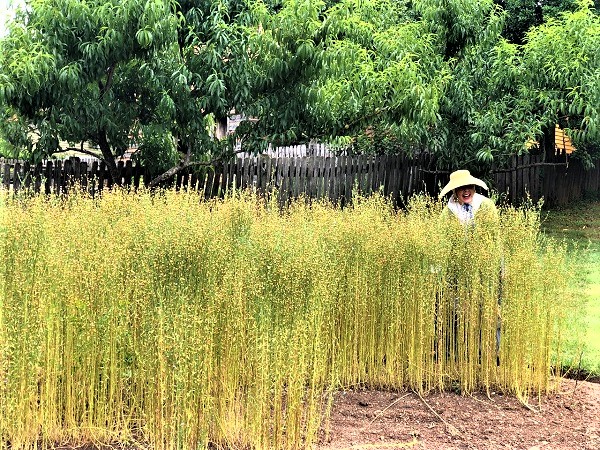 Old Salem Museums & Gardens﻿ tells us in its series Seeds with Stories: Flax (Linum usitatissimum) that Flax, one of the oldest cultivated plants, was first domesticated in the Fertile Crescent region about 9000 years ago. People in China, India, Switzerland & Germany all cultivated flax at least 5000 years ago.
In North America, colonists introduced flax where it flourished & was an important crop in Salem. Flax seeds can be ground into a meal or turned into linseed oil. Linseed oil, obtained by pressing, is a drying oil that can be used in wood finishing & as a pigment binder in oil paints. Linseed oil is also edible & high in omega-3 fatty acid. In addition, flax fibers are used to make linen. The many uses of flax are reflected in its Latin epithet usitatissimum, which means “most useful.”
A common practice one might have seen in Salem was flax retting, the process of separating the flax fibers from the stalks, where flax is laid out in a large field & dew is allowed to collect on it. This process normally takes a month or more but is generally considered to provide the highest quality flax fibers.
Old Salem explores the diverse cultural history of the early South, with special emphasis on the Moravians in North Carolina, enslaved & free people of African descent, & Indigenous peoples of the Southern Woodland.
at 6:00 AM