About 13,000 years ago on the banks of the Pleistocene American Falls Lake on the Snake River Plain, large “megafauna” mammals now extinct — such as mammoths, mastodons, camels, short-faced bears, dire wolves & saber-toothed tigers — lived alongside the Clovis people.

However, Clovis artifacts have never been recovered side-by-side with fossil remains of these extinct megafauna mammals, even though they’ve been found near each other.

Charles Speer, an Idaho State University anthropology assistant professor, along with colleagues at the Idaho Museum of Natural History, other universities & soon with ISU students, is engaged in research to document the link between the artifacts of the Clovis people & these extinct animals that populated the area during the same time period. 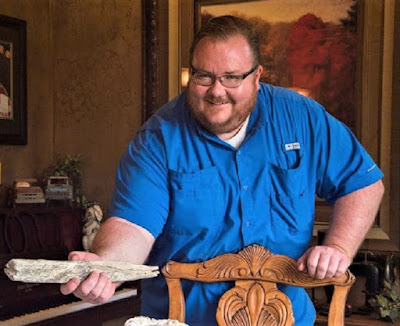 Charles Speer holds part of a mammoth fossil recovered at the 2018 ISU Archaeology Field School site in the Magic Valley near Kimberly. Next summer, Speer & the school will be working closer to home near American Falls Reservoir.

In a recently published paper on Clovis technology from American Falls on the Eastern Snake River Plain in the journal “North American Archaeologist,” Speer & colleagues detailed the potential for making new scientific findings that can shed light on this period of history in eastern Idaho. This potential includes discovering new information on the area’s climate, animals & people; all of which provides the rationale for thoroughly excavating a site in the area.

“We don’t have a connection in the Snake River Plain between Clovis stone tools, some of the earliest in North America, & the megafauna we have at the time,” Speer said. “We haven’t found any kill, butchering, or scavenging sites where we have the stone tools & animals in the same place. At the American Falls (reservoir) site, it is highly likely that we will find this connection. This next summer during the ISU archaeology field school in June, that is exactly what we are going to be looking for.”

The ISU researchers will be excavating a site down 8 to 10 feet below the surface. “The primary reason we are excavating is that the whole area is in danger of eroding away,” Speer said, noting the group has been tasked by the Bureau of Reclamation to recover as much as they can.

Speer explained that the climate on this portion of the Snake River Plain was likely colder & wetter 13,000 years ago. The climate was affected by the large glaciers to the north extending down from Canada only a few hundred kilometers away. Though the climate was cooler, this area was a magnet for the animals mentioned above, as well as familiar species still making the region home like mule deer, antelope, bison & elk.

“People camped out there, made their tools & hunted the animals. We really just want to make that connection showing they were exploiting these extinct animals because that is a big missing piece,” Speer said.

Studying the climate at the time & potential kill sites can help answer a host of questions about this area’s history.  “We are interested in the animals that died off right when this Clovis culture was at its peak,” Speer said. “We ask questions like ‘did these people kill all these animals, was it climate change or was it both?’ In North America alone, 90 genera of animals over 100 pounds died off during the Clovis period at the close of the Pleistocene 11,700 years ago,” Speer said. This included horses, that flourished when re-introduced 500 years ago by Europeans.

The researchers also are interested in how human beings reacted to climate change during this period, which was right at the end of the Pleistocene period, after which the climate warmed & dried considerably.

In addition, the researchers will be looking for evidence of a culture older than the Clovis living in eastern Idaho.  “Clovis for the longest time was thought to be the oldest culture in North America but know we know it is not,” Speer said. “Researchers in western Idaho have been excavating the Cooper’s Ferry site that is associated with a projectile point style called ‘Western Stemmed’ that is both contemporaneous & potentially older than Clovis. Additionally, they have recovered artifacts several thousands years older which we hope to also discover & fill in the missing pieces with here.”

“We are hoping to see an overlap & connection between the two,” Speer continued, “because we are right on this boundary where to the east you have Clovis in abundance & to the west we have Western Stemmed in abundance, but we don’t have any sites where the two are mixed up. We are also hoping to see the site stretch back in time to 17,000 or 18,000 years ago.”

The researchers will turn over any artifacts found at the site to the Idaho Museum of Natural History, which already has more than 10,000 specimens of megafauna that lived in the area & a collection of Clovis artifacts from the American Falls area.
at 4:00 AM