More Evidence that 1st Americans came from the Pacific Coast 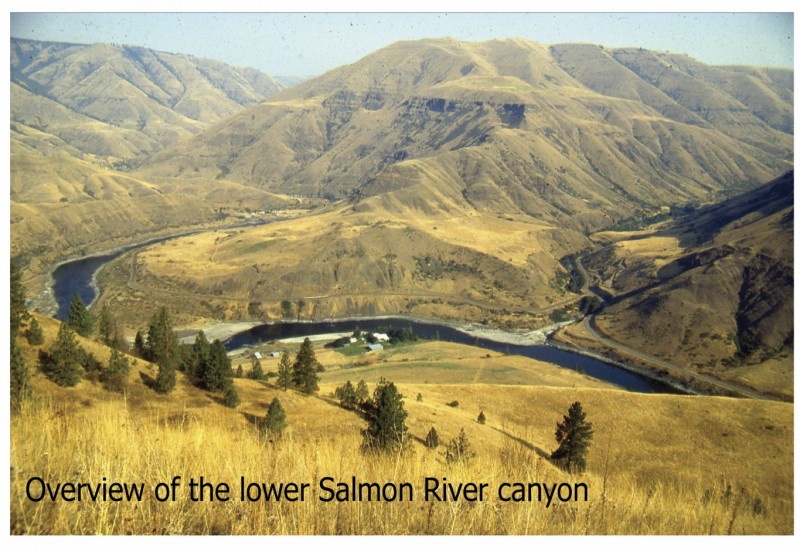 Archaeological evidence excavated in western Idaho suggests humans were in the region well over 15,000 years ago—prior to the opening of the massive ice sheets that blocked entrance into North America via the Bering land bridge. It’s further evidence that the continent’s first people arrived by traveling along the Pacific coast.

Prior to the Late Upper Paleolithic, humans had established a presence on every habitable continent on the planet—except North and South America. A gigantic and impenetrable obstruction known as the Cordilleran Ice Sheet blocked entry from Siberia into Alaska, preventing human migration into the New World.

But as the last great Ice Age ended, so too did this colossal barrier. Around 14,800 years ago, the Cordilleran Ice Sheet separated from its neighboring Laurentide Ice Sheet, creating an ice-free corridor that extended from Beringia through to what is now the Dakotas. This dramatic change in the environment has led archaeologists to surmise that the earliest migrants to North America arrived by traversing this corridor, in what’s referred to, appropriately enough, as the Ice-Free Corridor Hypothesis.

Trouble is, emerging archaeological and genetic evidence is increasingly pointing to an arrival date in North America prior to 14,800 years ago, leading to the Coastal Migration Hypothesis. Instead of traveling through the interior, this theory proposes a route in which the first settlers of North America traveled south along the Pacific coast, eventually surpassing the southernmost extent of the ice sheets.

New research published today in Science offers some of the earliest archaeological evidence of humans in North America, further bolstering the Coastal Migration Hypothesis. Working at the Cooper’s Ferry site in western Idaho, a team led by Loren Davis, a professor of anthropology at Oregon State University, uncovered stone tools, animal bones, traces of fire pits, and other signs of human occupation dated to between 16,560 and 15,280 years ago—several centuries prior to the appearance of the ice-free corridor.

“This is so cool,” Christiana Scheib, an archaeologist and paleogeneticist from the University of Cambridge, told Gizmodo. “This is a great example of the kind of archaeology we need happening in order to better understand the First Peoples in the Americas,” said Scheib, who wasn’t involved with the new study.

Archaeologist Alia Lesnek from the Department of Geology at the University at Buffalo, also not affiliated with the new study, said the new paper “presents an exciting new dataset that provides convincing evidence of human presence in modern-day Idaho as early as 15,300 years ago,” and that these results “add to a growing body of research suggesting that the First Americans arrived in North America by traveling along the Pacific coast.”

Last year, Lesnek and her colleagues uncovered potential geological evidence of an Alaskan coastal migration route that could have allowed humans to cross over from Eurasia into North America during the Ice Age.

But not everyone is convinced by the new evidence. One archaeologist we spoke to said more work will be required to validate the results presented in the new paper. The study describes findings from one of two excavation sites at Cooper’s Ferry, which has been investigated by archaeologists since the late 1990s.

“The Cooper’s Ferry site is located along the Salmon River, which is a tributary of the larger Columbia River basin,” said Davis in a press release. “Early peoples moving south along the Pacific coast would have encountered the Columbia River as the first place below the glaciers where they could easily walk and paddle in to North America. Essentially, the Columbia River corridor was the first off-ramp of a Pacific coast migration route.” To which he added: “The timing and position of the Cooper’s Ferry site is consistent with and most easily explained as the result of an early Pacific coastal migration.” 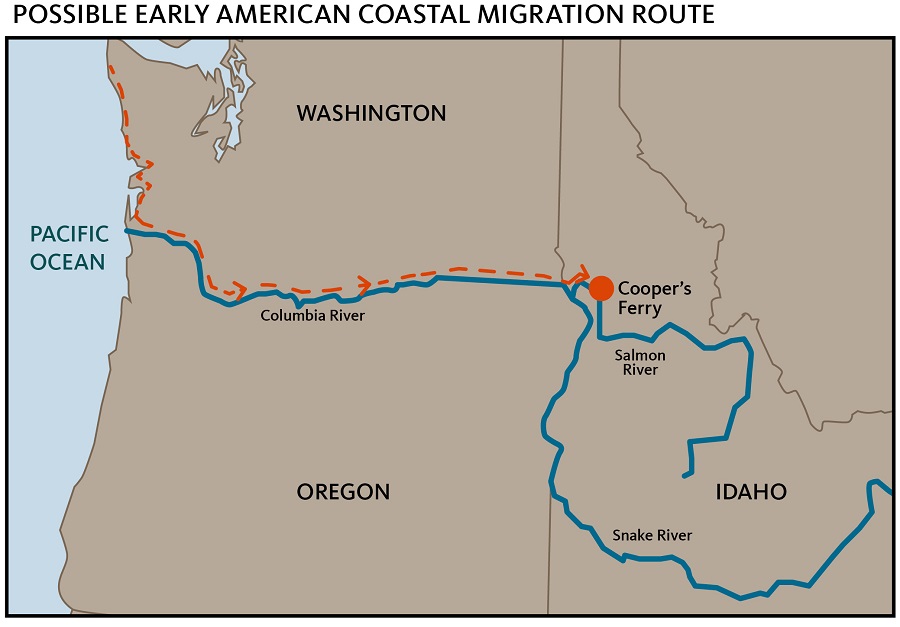 Buried within the deepest layers of the site, Loren’s team found hundreds of artifacts, including stone tools, fire-cracked rocks used in hearths, bone fragments from possibly prey, and other evidence of human occupation, such as areas used for processing food. Tooth fragments from an extinct horse were also uncovered, though its connection to the settlement is not entirely clear.

Radiocarbon dating of animal bone fragments and burnt charcoal suggests the site was repeatedly occupied between 16,560 and 15,280 years ago. “Prior to getting these radiocarbon ages, the oldest things we’d found dated mostly in the 13,000-year range, and the earliest evidence of people in the Americas had been dated to just before 14,000 years old in a handful of other sites,” explained Davis. “When I first saw that the lower archaeological layer contained radiocarbon ages older than 14,000 years, I was stunned but skeptical and needed to see those numbers repeated over and over just to be sure they’re right. So we ran more radiocarbon dates, and the lower layer consistently dated between 14,000-16,000 years old.”

The new paper subsequently challenges the longstanding “Clovis First” theory of North American colonization, which proposes that the first migrants to the continent arrived via the interior ice-free route, eventually reaching the Dakotas. What’s more, the authors presented evidence showing that the tools used by the Cooper’s Ferry migrants were of a distinctly non-Clovis-like nature. Specifically, these people employed unfluted and stemmed projectile points, and not the fluted, broad-based points indicative of Clovis culture. Loren and his colleagues also argued that the tools used by the Cooper’s Ferry people bear a striking resemblance to those found in contemporaneous cultures living in northeastern Asia, including Japan. This would seem to suggest that these early migrants retained knowledge of this technology as they settled into North America.

Potter expressed concerns about the layer itself, which he described as a hodge-podge of “multiple potentially overlapping components over four thousand years.” He also didn’t love the fact that the majority of dates established within the investigated layer were less than 13,800 years old (10 out of the 18 ages reported). There is “no good reason to hypothesize occupation” at more than 16,000 years ago “because of a few widely scattered charcoal fragments not directly linked to cultural feature, and one from a feature with much later ages,” he said. The date presented in the study most closely linked with stemmed points at other sites, around 11,600 years old, or the oldest hearth with a few flakes between 15,000-14,000 years old, he said, do not “preclude passage through the Ice Free Corridor and/or the Pacific coast,” and by “no means do these data refute the [ice-free corridor] hypothesis. Both interior and coastal routes remain viable,” he said.

On a similar note, Lesnek thought it important to point out that the oldest age established for the site, at over 16,500 years old, was not established directly from material that was actually dated. “Rather, that age comes from a statistical modeling program that uses dates from the entire sediment layer to estimate when the event—in this case occupation by humans—began,” Lesnek told Gizmodo. “However, the statistical modeling program the authors employ is robust and widely used in archeology and earth sciences. In addition, even if the authors used the oldest radiocarbon date to determine the age of the site, that would put humans in North America by 15,300 years ago, which precludes that the initial migration to the Americas took place through the ice-free corridor.”

Potter described the comparisons of the stemmed points with Japanese tools as being “superficial and unconvincing,” without “any technological analysis to support the hypothesized connections.” Similarly, Scheib said this connection was “interesting,” but it “doesn’t mean that these people came directly from there,” she told Gizmodo.

Scheib, who studies the DNA of America’s first people, said an early genetic split occurred among North America’s first settlers, and it may have happened around the time of the Cooper’s Ferry settlement. “One group is associated with Clovis tools and related to modern Central and South Americans and the other is related to modern North Americans,” Scheib told Gizmodo. “It would be very interesting to know whether the early people at Cooper’s Ferry are genetically more like one or the other. Or if this is the time when these two groups are actually becoming distinct entities.” Genetic evidence from Cooper’s Ferry—which has yet to be uncovered—could tell us more about how and where these two populations diverged, she said. Finding DNA could be tough but not impossible.

“The cultural material at Cooper’s Ferry was only accessible due to the construction of a road in the 1930s, which removed about 15 feet of sediment,” Lesnek told Gizmodo. “It may very well be that other ancient archeological sites are buried across North America, but we haven’t found them yet.”


As a historian of North America as the Europeans began to colonize the area now the United States, I am intrigued with, almost obsessed with, when humans 1st appeared in the Atlantic coast area later settled by European colonists. How did these early peoples try to gain some control over the weather patterns & geography? Did they create physical spaces to meet their basic needs for shelter, food, family, health, & safety. How did they organize their society & culture? Did they migrate on foot or water to these sites? Did they generate myths & religions? Humans have a long history of constant migration, confrontation, & adaptation for hundreds of thousands of years. And, of course, different populations around the planet adapted to different conditions in different ways.  BWS
at 4:00 AM