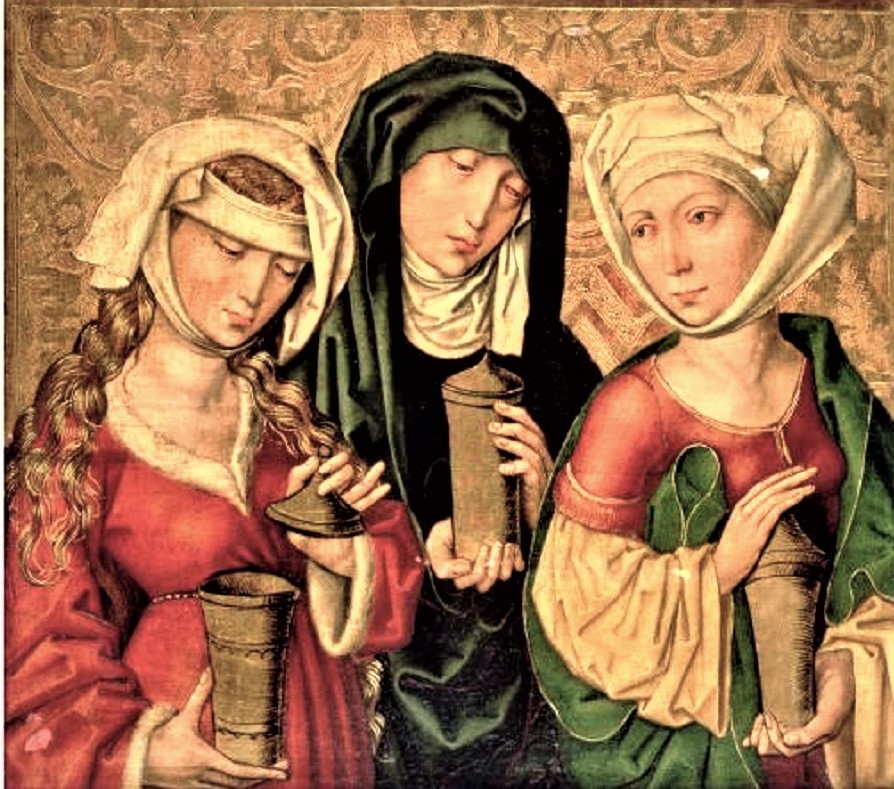 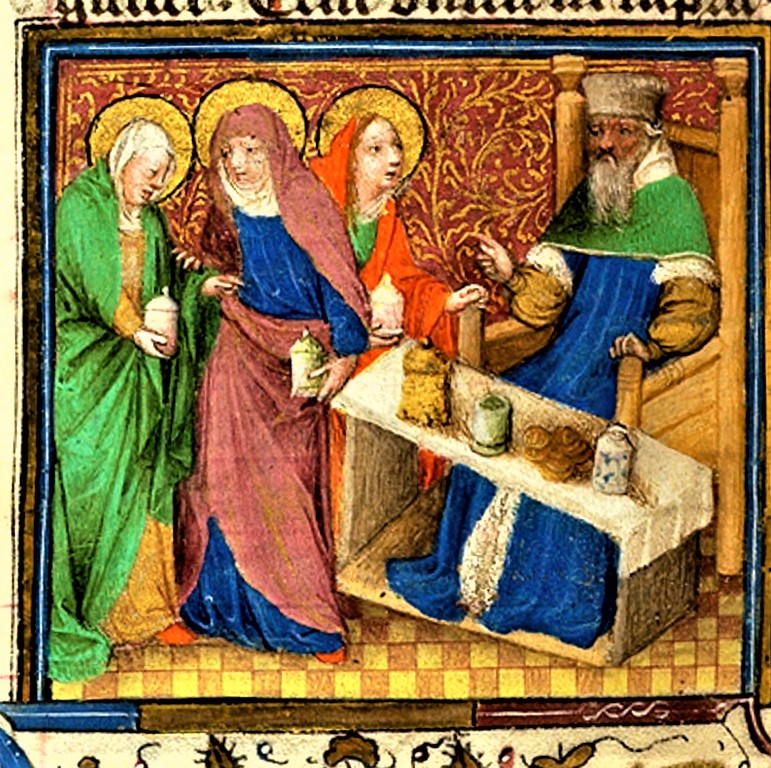 Biblical Holy Women associated with Christ's Resurrection buying anointing spices from merchant in the “Egmont Breviary.” New York, Morgan Library (M.87, fol. 202v). Utrecht, c. 1440.  The Marys buying ointment at the ointment shop.  Mary Magdalene, and Mary the mother of James, and Salome had bought sweet spices, that they might come to the tomb to anoint him.  The Gospel of Mark has this happening on the Saturday evening. The author of Matthew may have copied the wording from the Saturday spice buying & combined it with their visit to the tomb, creating the ambiguity in the timing.

In the end of the sabbath, as it began to dawn toward the first day of the week, came Mary Magdalene and the other Mary to see the sepulchre. Matthew 28:1 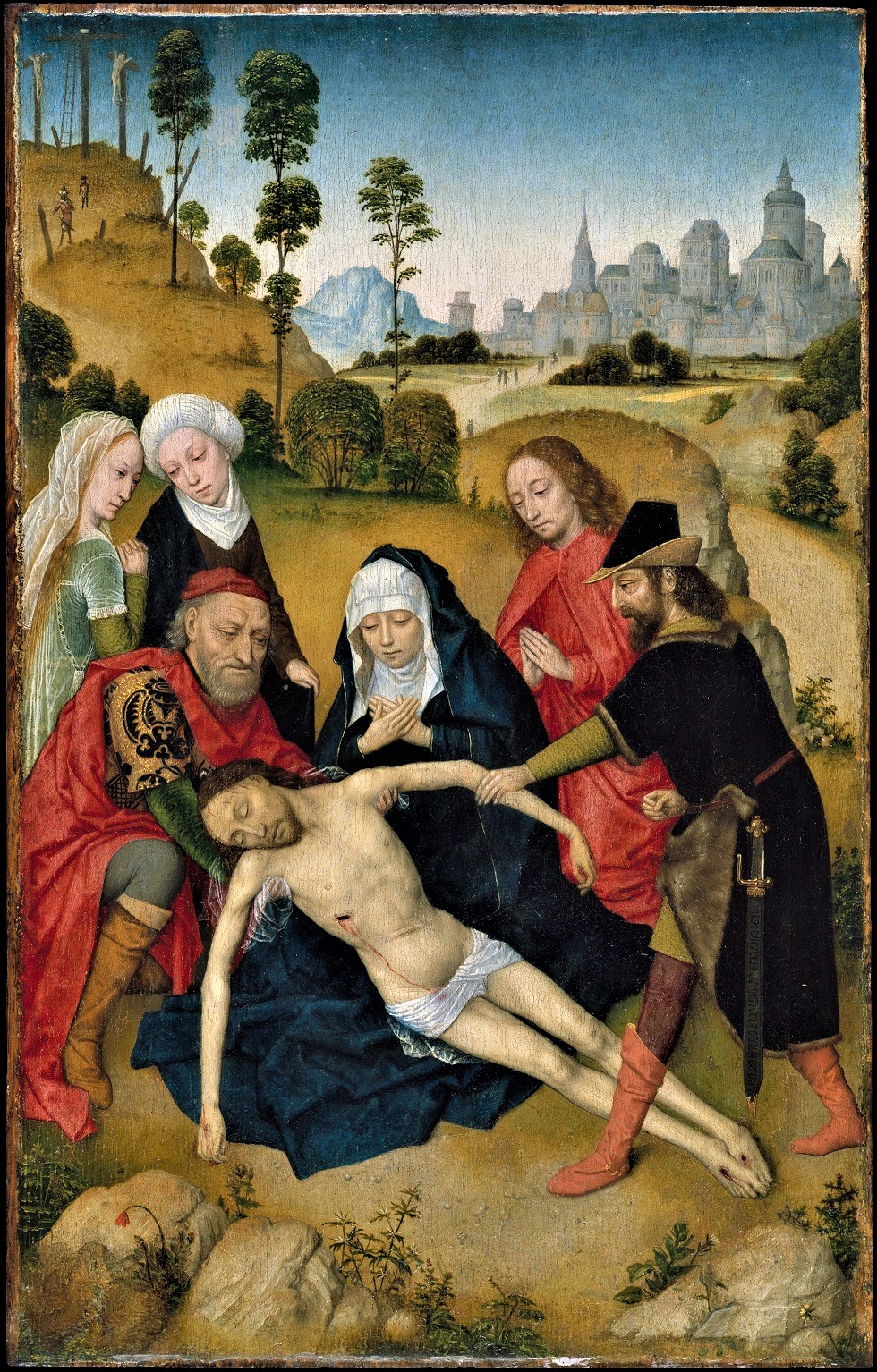 The Lamentation of Christ by Simon Marmion (French, 1425-1489) c 1473  The Met tells us that the lifeless body of Christ rests in his mother's lap, his torso supported by Joseph of Arimathea & Nicodemus. Just behind, and somewhat apart from the Virgin, Saint John the Evangelist kneels in prayer. Mary Magdalen & a female companion express their quiet grief at far left. Essentially a Pietà in concept, this image of mourning foregrounds Christ's limp body, reminding the viewer that his sacrifice makes possible mankind's salvation through the celebration of the Eucharist. The drooping poppy at bottom left symbolizes sleep and death.

This man [Joseph of Arimathea] went to Pilate and asked for the body of Jesus. … It was the day of Preparation, and the sabbath was beginning.  The women who had come with him from Galilee followed, and they saw the tomb and how his body was laid.  Then they returned, and prepared spices and ointments.  On the sabbath they rested according to the commandment.
Luke 23 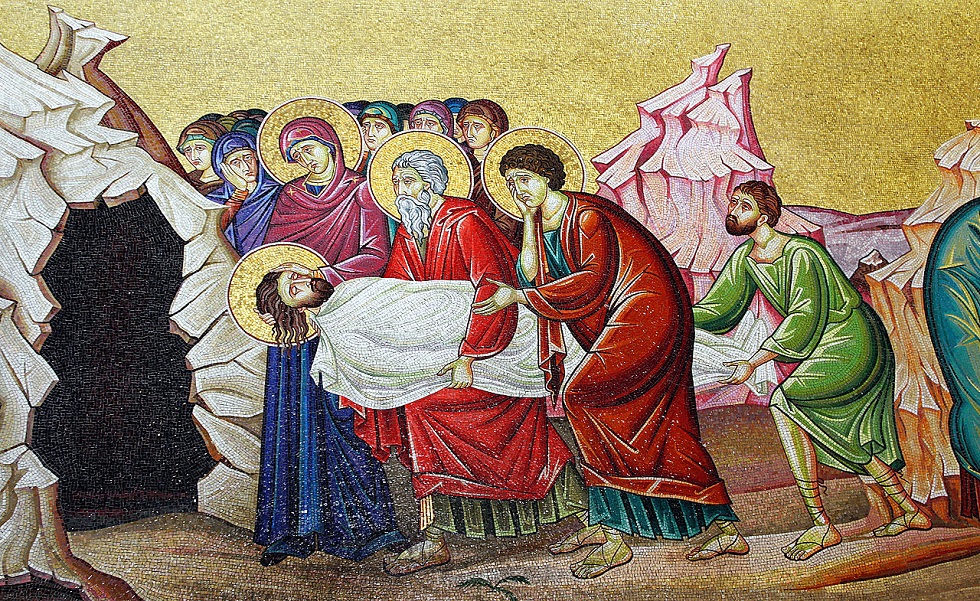 Wall mosaic of entombment of Jesus near Stone of anointing at Church of the Holy Sepulchre.

By the Jewish calendar, the new day begins at sundown, thus the beginning of the day would have been Saturday evening. One debate over this verse is what it says about the time of the visit, & thus the resurrection. The 3 other gospels & the current Christian tradition, have the empty tomb discovered the day after Sabbath, today known as Easter Sunday. This verse actually contains 2 time indicators. The 1st can be translated as "late on Sabbath" and the 2nd as "at the beginning of the first day of the week." It literally translates as dawning of the day, but as at Luke 23:54 this term can also refer to the time at sundown as the beginning of night. Thus the verse can be read as describing the resurrection as happening on Saturday rather than Sunday.
at 4:00 AM