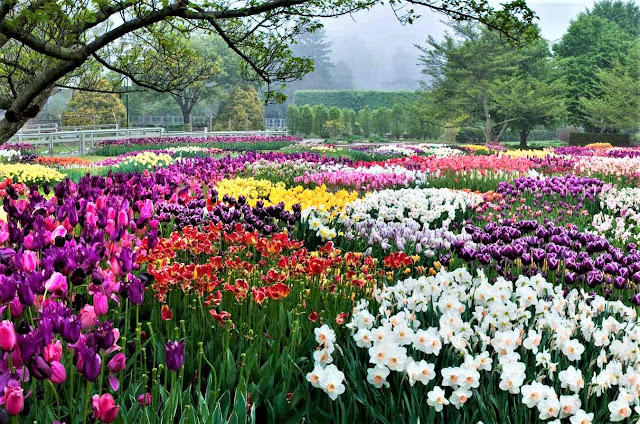 By the mid-1930s, Longwood had grown from the original 202 acres to 926 due to Pierre’s purchase of 25 contiguous properties over the years. In addition to horticulture, agriculture had always been important at Longwood, which started out, after all, as a farm.
Longwood’s agricultural & horticultural operations slowed considerably during World War II. Many employees served in the Armed Forces, & a 72-bed emergency hospital was set up in rooms above the Ballroom just in case the community needed it. Pierre du Pont was a “gentlemen farmer” who sought to create a self-sustaining model farm that used the latest techniques & methods. In reality, the farm was more an expansive, expensive hobby than a business, but it did produce food for the du Ponts & their employees.
As early as 1914 with the formation of Longwood, Inc., Pierre was thinking about the eventual fate of the property after his death. In 1944, Mrs. du Pont died, & Pierre initially retreated to his apartment in Wilmington during weekdays, visiting Longwood only on weekends. But he was more concerned than ever about Longwood's future, particularly since he had no children but considered the Gardens part of the du Pont family legacy.
In 1913, the US government enacted personal income tax. In response, Pierre incorporated Longwood in 1914. He always tried to stay one step ahead of the IRS to keep his farm & gardens in the best possible tax situation, & in 1937 the Longwood Foundation was created to handle his charitable giving. Finally, in 1946, the government gave approval for the Foundation to operate Longwood Gardens as a public garden with tax-exempt status “for the sole use of the public for purposes of exhibition, instruction, education & enjoyment.”    See: Longwood Gardens History for more.
“Beauty awakens the soul to act.” - Dante Alighieri (1265-1321)
at 4:00 AM