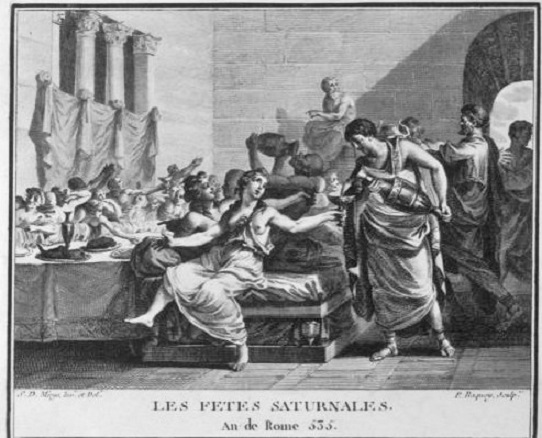 "How did the Romans celebrate ‘Christmas’?

"It is today associated with decorations, gift giving and indulgence. But how did the Romans celebrate during the festive season? English historian Dr Carey Fleiner, a senior lecturer in classical and medieval history at the University of Winchester, looks back at Saturnalia, the Roman mid-winter ‘festival of misrule’

"Q: What was Saturnalia, and how was it celebrated?

"A: It was the Romans’ mid-winter knees up!

"It was a topsy-turvy holiday of feasting, drinking, singing in the street naked, clapping hands, gambling in public and making noise.

"A character in Macrobius’s Saturnalia [an encyclopedic celebration of Roman culture written in the early fifth century] quotes from an unnamed priest of the god Saturn that, according to the god himself, during the Saturnalia “all things that are serious are barred”.  So while it was a holy day, it was also very much a festive day as well.

"The ordinarily rigid and conservative social restrictions of the Romans changed – for example, masters served their slaves during a feast and adults would serve children, and slaves were allowed to gamble. 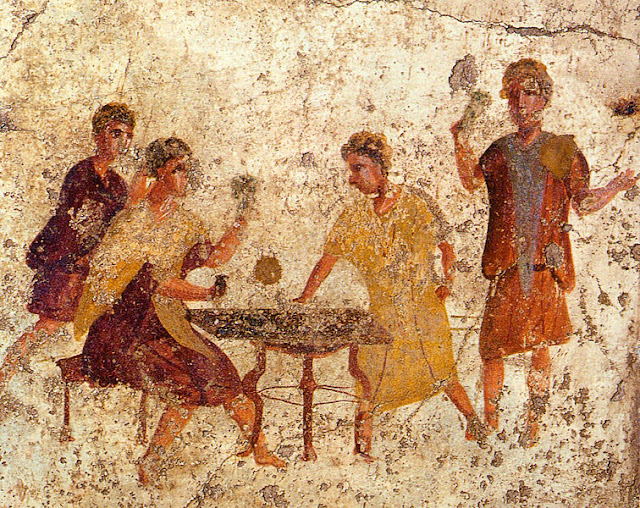 Dice players in a wall painting from Pompeii

"And the aristocracy, who usually wore conservative clothes, dressed in brightly coloured fabrics such as red, purple and gold. This outfit was called the ‘synthesis’, which meant ‘to be put together’. They would ‘put together’ whatever clothes they wanted.

"People would also wear a cap of freedom – the pilleum – which was usually worn by slaves who had been awarded their freedom, to symbolise that they were ‘free’ during the Saturnalia.

"People would feast in their homes, but the historian Livy notes that by 217 BC there would also be a huge public feast at the oldest temple in Rome, the Temple of Saturn. Macrobius confirms this, and says that the rowdy participants would spill out onto the street, with the participants shouting, “Io Saturnalia!” the way we might greet people with ‘Merry Christmas!’ or ‘Happy New Year!’

"A small statue of Saturn might be present at such feasts, as if Saturn himself were there. The statue of Saturn in the temple itself spent most of the year with its feet bound in woolen strips. On the feast day, these binds of wool wrapped around his feet were loosened – symbolising that the Romans were ‘cutting loose’ during the Saturnalia.

"People were permitted to gamble in public and bob for corks in ice water. The author Aulus Gellius noted that, as a student, he and his friends would play trivia games. Chariot racing was also an important component of the Saturnalia and the associated sun-god festivities around that time – by the late fourth century AD there might be up to 36 races a day.

"We say that during Christmas today the whole world shuts down – the same thing happened during the Saturnalia. There were sometimes plots to overthrow the government, because people were distracted – the famous conspirator Cataline had planned to murder the Senate and set the city on fire during the holiday, but his plan was uncovered and stopped by Cicero in 63 BC.

"Saturnalia was described by first-century AD poet Gaius Valerius Catullus as “the best of times”. It was certainly the most popular holiday in the Roman calendar. 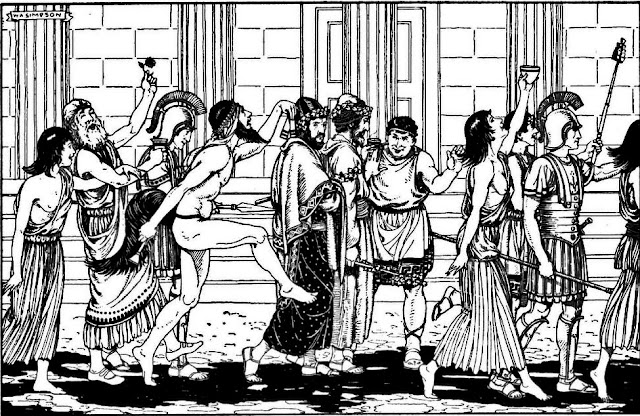 "Q: Where does Saturnalia originate?

"It was the result of the merging of three winter festivals over the centuries. These included the day of Saturn – the god of seeds and sowing – which was the Saturnalia itself. The dates for the Saturnalia shifted a bit over time, but it was originally held on 17 December.

"Later, the 17th was given over to the Opalia, a feast day dedicated to Saturn’s wife – who was also his sister. She was the goddess of abundance and the fruits of the earth.

"Because they were associated with heaven (Saturn) and Earth (Opalia), their holidays ended up combined, according again to Macrobius. And the third was a feast day celebrating the shortest day, called the bruma by the Romans. The Brumalia coincided with the solstice, on 21 or 22 December.

"The three were merged, and became a seven-day jolly running from 17–23 December. But the emperor Augustus [who ruled from 27 BC–AD 14] shortened it to a three-day holiday, as it was causing chaos in terms of the working day.

"Later, Caligula [ruled AD 37–41 ] extended it to a five-day holiday, and by the time of Macrobius [early fifth century] it had extended to almost two weeks.

'As with so many Roman traditions, the origins of the Saturnalia are lost to the mists of time. The writer Columella notes in his book about agriculture [De Re Rustica, published in the early first century AD] that the Saturnalia came at the end of the agrarian year.

"The festivities fell on the winter solstice, and helped to make up for the monotony of the lull between the end of the harvest and the beginning of the spring.

"Q: Were gift-giving and decorations part of Saturnalia?

"A: Saturnalia was more about a change in attitudes than presents. But a couple of gifts that were given were white candles, named cerei, and clay faces named sigillariae. The candles signified the increase of light after the solstice, while the sigillariae were little ornaments people exchanged.

"These were sometimes hung in greenery as a form of decoration, and people would bring in holly and berries to honour Saturn.

"Q: Was Saturnalia welcomed by everyone?

"A: Not among the Romans!

"Seneca [who died in AD 62] complained that the mob went out of control “in pleasantries”, and Pliny the Younger wrote in one of his letters that he holed up in his study while the rest of the household celebrated.

"As might be expected, the early Christian authorities objected to the festivities as well.

"It wasn’t until the late fourth century that the church fathers could agree on the date of Christ’s birth – unlike the pagan Romans, Christians tended to give no importance to anyone’s birthday. The big day in the Christian religious calendar was Easter.

"Nevertheless, eventually the church settled on 25 December as the date of Christ’s nativity. For the Christians, it was a holy day, not a holiday, and they wanted the period to be sombre and distinguished from the pagan Saturnalia traditions such as gambling, drinking, and of course, most of all, worshipping a pagan god!

"But their attempts to ban Saturnalia were not successful, as it was so popular. As late as the eighth century, church authorities complained that even people in Rome were still celebrating the old pagan customs associated with the Saturnalia and other winter holidays."
Tuesday 17th December 2013  BBC History Magazine by Emma McFarnon
at 4:30 AM