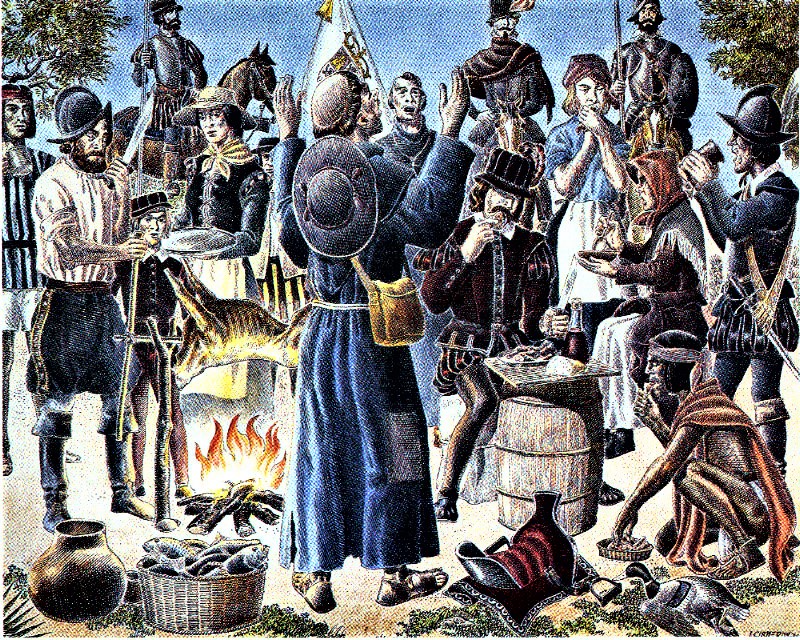 Juan De Oñate celebrated Thanksgiving in 1598 at modern day San Elizario, Texas.
Conquistadors under the leadership of Don Juan De Oñate celebrated Thanksgiving in 1598 at modern day San Elizario, Texas.  Over 20 years before the widely known feast in New England, Spanish Conquistadors held a mass & a feast giving thanks in what is now San Elizario, Texas.  Al Borrego, artist & spokesman for the San Elizario Genealogical & Historical Society, said "Oñate, colonizer of New Mexico, entered what is now the United States, near San Elizario, Texas, on April 20, 1598, at the banks of the Rio Bravo," Borrego said.  "They built a church with a nave large enough to hold the expedition (over 500), held a mass followed by the 'Toma' (official taking possession of the territory the river drained into), followed by a feast & celebration & even a comedy in the afternoon." The San Elizario celebration had all the key trappings of a Thanksgiving, right down to the local indigenous population joining in the meal.  Juan de Oñate was a member of a distinguished family that had loyally worked for the Spanish crown. His father had discovered & developed rich mines in Zacatecas, Mexico. Oñate, himself, had opened the mines of San Luis Potosí & performed many other services for the Spanish king. But he wanted to carve an unquestioned place in history by leading an important expedition into unexplored land.
He was granted land in the northern Rio Grande Valley among the Pueblo Indians by the viceroy of New Spain. The viceroy moved to a new post, however, & his successor was slow to grant Oñate permission to begin his expedition. Finally, in 1597, approval came. To reach his new holdings, Oñate chose to bypass the traditional route that followed the Rio Conchos in present-day Mexico to the Rio Grande & then northward along the Rio Grande into New Mexico. In the summer of 1597, Oñate sent Vicente de Zaldívar to blaze a wagon trail from Santa Barbara in southern Chihuahua, along which could be found adequate water supplies. Zaldívar underwent many hardships, including capture by Indians, in carrying out his instructions. No mention of the hardships was made, however, when he made his report to Oñate. (The trail blazed by Zaldívar has become the route of today's highway between Chihuahua City & El Paso.)

By early March 1598, Oñate's expedition of 500 people, including soldiers, colonists, wives & children & 7,000 head of livestock, was ready to cross the treacherous Chihuahuan Desert. Almost from the beginning of the 50-day march, nature challenged the Spaniards. First, seven consecutive days of rain made travel miserable. Then the hardship was reversed, & the travelers suffered greatly from the dry weather. On one occasion, a chance rain shower saved the parched colonists. Finally, for the last five days of the march before reaching the Rio Grande, the expedition ran out of both food & water, forcing the men, women & children to seek roots & other scarce desert vegetation to eat. Both animals & humans almost went mad with thirst before the party reached water. Two horses drank until their stomachs burst, & two others drowned in the river in their haste to consume as much water as possible.  The Rio Grande was the salvation of the expedition, however. After recuperating for 10 days, Oñate ordered a day of thanksgiving for the survival of the expedition. Included in the event was a feast, supplied with game by the Spaniards & with fish by the natives of the region. A mass was said by the Franciscan missionaries traveling with the expedition. And finally, Oñate read La Toma -- the taking -- declaring the land drained by the Great River to be the possession of King Philip II of Spain.  A member of the expedition wrote of the original celebration, "We built a great bonfire & roasted the meat & fish, & then all sat down to a repast the like of which we had never enjoyed before. . .We were happy that our trials were over; as happy as were the passengers in the Ark when they saw the dove returning with the olive branch in his beak, bringing tidings that the deluge had subsided."

After the celebration, the Oñate expedition continued up the Rio Grande & eventually settled near Santa Fé. As one historian noted, when Jamestown & Plymouth were established early in the 17th century, they were English attempts to gain a foothold in the New World. Santa Fé was but one of hundreds of towns the Spanish already had established in the New World.