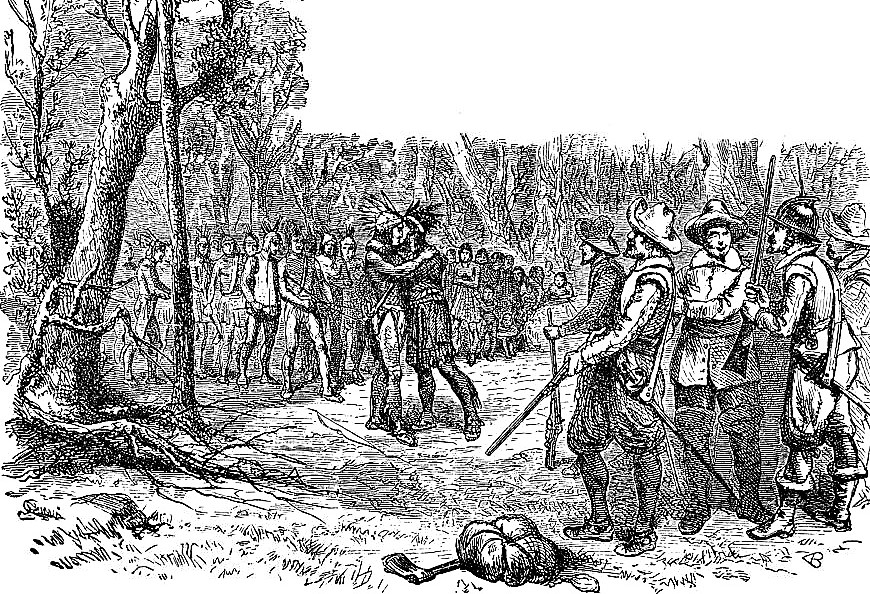 A highway-marker at Popham Colony, located in modern-day Phippsburg, Maine, marks a 1607 Thanksgiving in Popham Colony.  Fourteen years before the Pilgrims & the Wampanoag tribe feasted together, the short-lived settlement of Popham Colony held 2 celebrations considered by some to be thanksgiving observances. "The first occurred in September when the settlers encountered a native tribe (the Abenaki). Nine canoes arrived at the Popham settlement with about 40 people. The settlers gave them food & Skidwarres & one other Abenaki stayed the night," reports a researcher with the Maine Historical Society. "Later in October, 5 tribesmen arrived: Skidwarres, Nahandada & his wife, one other & a tribal leader named Amenquin. They feasted for 2 days with Popham & the others. The second day was Sunday, so they also joined the settlers in morning & evening prayers."  Captain George Popham, leader of the colony, died within a year of the 2 ceremonies.
Maine’s Lost Colony : Archeologists uncover an early American settlement that history forgot
Smithsonian Magazine February 2004
By Myron Beckenstein
Not far from Portland along Maine’s winding coast, someone has placed a neatly lettered sign on an otherwise undistinguished boulder. It reads: Popham Rock 1607. A play on Plymouth Rock 1620, some 200 miles south? Not entirely. A colony called Popham actually did precede the renowned Massachusetts settlement. “Popham was the cornerstone in the foundation of English America,” says Jeffrey P. Brain, 64, an archaeologist with the Peabody Essex Museum in Salem, Massachusetts, who is excavating the site of the forgotten colony. “The lessons learned were important to the later success of the Pilgrims.”  Popham’s value lies in its failure. Its remains...have been called one of the most significant archaeological sites in the country. Unlike Jamestown, Popham’s successful sister colony in Virginia, whose footprint changed as it developed, Popham represents a unique, undisturbed time capsule of a very early North American settlement.

"Each September since 1997, Brain has enlisted a few colleagues & some 30 volunteers & amateur archaeologists to work for 3 weeks at the mouth of the Kennebec River, about 25 miles northeast of Portland. This year’s team included an epidemiologist, an engineer, a nurse, a sociology professor & a historian from England. Popham was named after its principal financial backer, Sir John Popham, & his nephew George Popham, the colony’s president. It was founded about 20 years after Sir Walter Raleigh’s North Carolina colony disappeared in the 1580s, when, as the economic race with France & Spain heated up, England made another attempt to plant its flag in the New World. In 1606, James I granted a charter to a joint stock company to establish two colonies, one, Jamestown, on the southern Atlantic Coast, & the other, Popham, on the northern.  On May 31, 1607, about 100 men & boys set sail for the northerly destination. Discharged soldiers made up most of the colonists’ ranks, but shipwrights, coopers, carpenters & a smattering of “gentlemen of quality” rounded them out. About three months later, the group landed on a wooded peninsula where the Kennebec River meets the Atlantic Ocean, & began building Fort St. George. In December, with winter coming & food scarce, half of the colonists returned to England. The next fall, after erecting several buildings, the remaining 45 sailed home.

"Popham’s rediscovery came about by two events a century apart. In 1888, a researcher for an American diplomat happened upon a map of Fort St. George in government archives in Madrid. Drawn & signed by Popham colonist John Hunt, it was likely snatched, or copied, by a Spanish spy soon after it arrived in England in 1608. The only known detailed plan of an early English colony, the map contains sketches of trenched ramparts, a storehouse, a chapel & various buildings—in all, more than 15 structures. Though published in 1890, the map provoked little interest for 100 years, until Brain came upon a mention of the lost colony while vacationing in Maine.  At first “I thought it was some sort of local mythology,” he says. “But it was historically known, & I decided it was time to look for it archaeologically.”  Research led him to Hunt’s map, which took him to Sabino Head, a windy promontory on the Kennebec. Topographical features seemed to match Fort St. George’s modified star-shaped contours. Conducting a test excavation on the area in 1994, Brain & his team found a posthole after several weeks of digging. Baffled by not finding more postholes, he “fiddled with the map,” rotated it 20 degrees & came up with a dead-on match with the landscape. “It was a eureka moment,” he recalls. Soon the crew was “turning up one after another” of the three-foot-wide pine mold-filled holes, eventually 19 in all, outlining the 69-by-20-foot storehouse that Hunt had depicted on his blueprint almost 400 years before.

"Archaeologists are still not sure how many of the map’s structures were actually built, but so far, in addition to the storehouse, they’ve located parts of the trench wall & the “Admirals howse,” & they have leads on the buttery, a storehouse for wine & liquor. During the second week of this year’s dig, Kathy Bugbee, a retiree from Southport, Maine, unearthed an inch-long piece of decorated stoneware. A digger for seven years, she recognized the brown glazed fragment as part of a Bellarmine jug, a German-made container used throughout Europe to store liquor in the 16th & 17th centuries. In his on-site cache of artifacts, Brain found a wedge of Bellarmine that he had assembled from other fragments two years earlier. Bugbee’s find slid easily into a gap in the piece to reveal a medallion motif. The jug’s embossed seal reads: “1599.”  In addition to Bellarmine, the site has yielded other ceramics, clay tobacco pipes, glass trading beads, bullets & tools, including a caulking iron, used in shipbuilding. The Popham settlers did succeed in constructing the Virginia, a small but durable vessel that would take them back to England & later make other transatlantic voyages. At the admiral’s house, the archaeological team turned up shards of delftware, more Bellarmine, fancy buttons, bits of etched wine glasses & jet beads—all reflecting the occupants’ upper-class rank...

"The main reason for abandoning the colony, Brain theorizes, was a loss of leadership. Only one member of the group, George Popham, is known to have died at Fort St. George. (Jamestown lost more than half of its 120 settlers the first year.) But he was the colony’s president, & on February 5, 1608, Raleigh Gilbert took command. Just 25, Gilbert was, according to one investor, “desirous of supremasy,” “a loose life,” with “litle zeale in Religion.” Six months later, a resupply ship brought Gilbert news that he had inherited a title & an estate back in England. When Gilbert decided to return to England to collect, the others headed back with him. “They were headless, so to speak,” Brain says. “English society was very stratified; people needed leaders.” Bad relations with the Indians, the fear of another severe winter & the area’s lack of easily exploitable resources, such as gold or other precious metals, also affected the decision to abandon Popham.

"Most of the returned settlers disappeared into history; a few crossed the Atlantic again to try their hand at Jamestown. The Pilgrims who arrived 12 years later, landing at Plymouth, had obviously learned some lessons from Popham. “They settled farther south in a milder climate that was more familiar to them & more conducive to agriculture,” says Brain. “They tried harder to work with the Indians. They also brought women & children. “Luck had a lot to do with these early ventures,” Brain adds, explaining that Jamestown, too, almost failed. Hit hard by disease & starvation, the 50 or so remaining settlers abandoned the colony in the spring of 1610 & were sailing home when they encountered a relief fleet & a new governor, who ordered them back to Jamestown."
at 12:30 PM