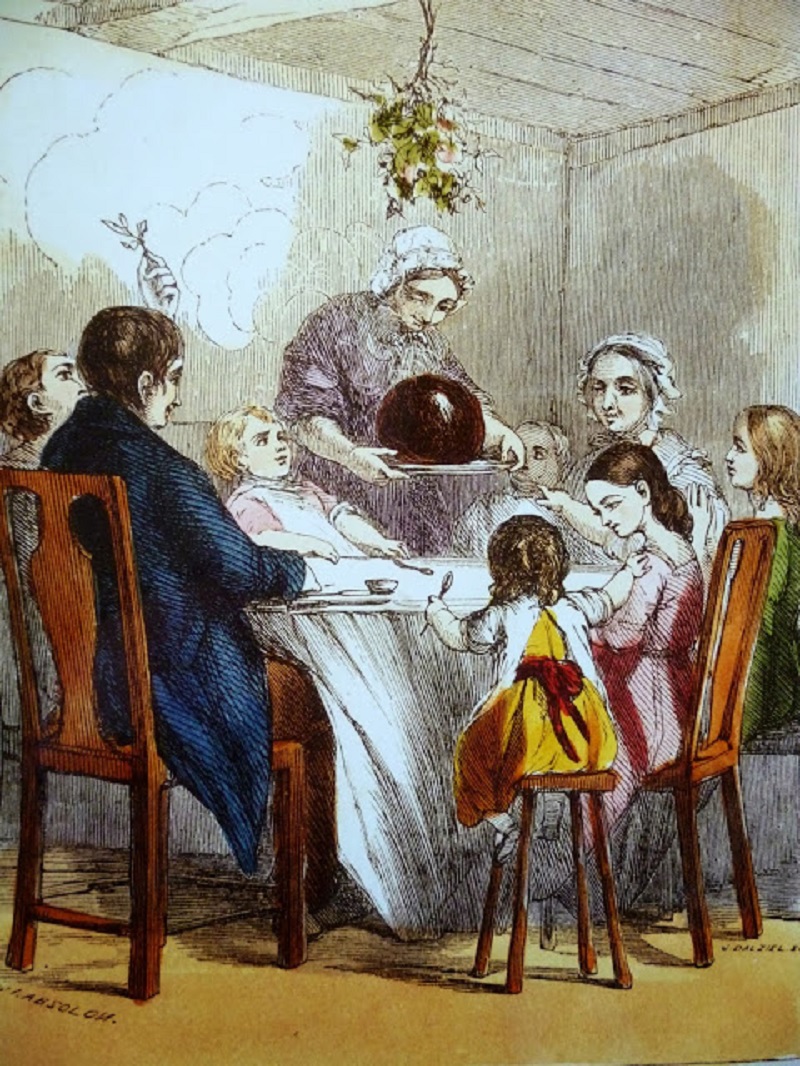 Although the Christmas Pudding took its final form in Victorian England, the origins of Christmas pudding lie back in the middle ages, in the now-forgotten ‘plum pottage’. Pottage was a general term for a mixture of ingredients, usually meat and vegetables, boiled together in a cauldron for several hours. It was very versatile and was a staple of the English diet for many centuries. Plum pottage, the ancestor of the Christmas pudding, generally contained meat, dried fruits, a little sugar, and mixed spices (cloves, cinnamon, nutmeg and ginger). As with mince pies, the meat was included because many livestock were slaughtered in the autumn due to a lack of fodder in the winter, and cooks had to find a good way of both preserving and serving up the meat. Plum pottage didn’t necessarily contain any plums or prunes; it got its name from the fact that in the Elizabethan era, prunes became so popular that they started to be used to refer to a wide variety of dried fruits. 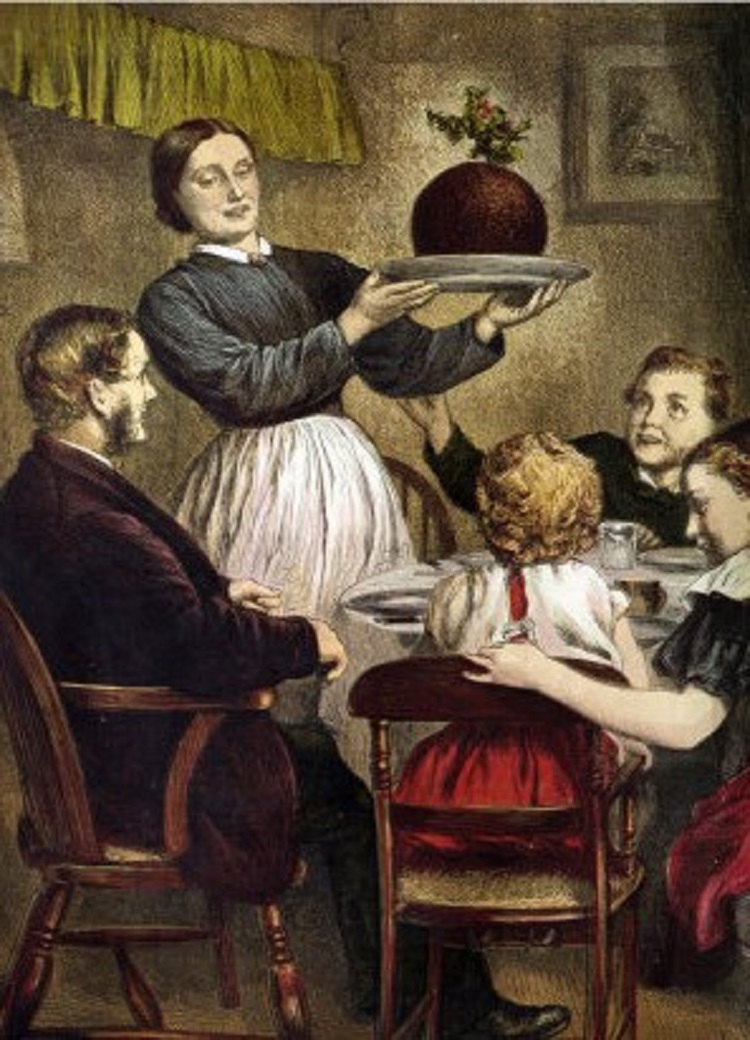 Hurrah for the Christmas Pudding 1909

Over the course of the 18th century, pottage and porridge became unfashionable as sophisticated cuisine increasingly took its cues from France. In 1758 Martha Bradley, the author of The British Housewife: or, The Cooke, Housekeeper’s and Gardiner’s Companion said of plum porridge that “the French laugh outrageously at this old English Dish.” Her own recipe for ‘plumb porridge’ sounds very rich; it contains a leg and a shin of beef, white bread, currants, raisins, prunes, mace, cloves, nutmegs, sherry, salt and sugar. As plum pottage died out, the plum pudding rose to take its place. Thanks to cheap sugar from the expanding West Indian slave plantations, plum puddings became sweeter and the savoury element of the dish (meat) became less important. By the Victorian period the only meat product in a Christmas pudding was suet (raw beef or mutton fat). At this point it had really become Christmas pudding as we know it, with the cannonball-shaped pudding of flour, fruits, suet, sugar and spices topped with a sprig of holly, doused in brandy and set alight.

How exactly plum pudding got to be associated with Christmas is the next mystery. The earlier plum pottage was apparently enjoyed at times of celebration, although it was primarily associated with harvest festivities rather than Christmas. There is an unsubstantiated story that in 1714, King George I (sometimes known as the Pudding King) requested that plum pudding be served as part of his first Christmas feast in England. Whether this actually happened or not, was can see that recipe books from the 18th century onwards did start associating plum pudding with Christmas. In 1740, a publication titled Christmas Entertainments included a recipe for plum pudding, which suggests that it was increasingly eaten in a Christmas context. The first known reference to a ‘Christmas pudding’ is, however, not to be found until 1845, in Eliza Acton’s bestselling Modern Cookery for Private Families. 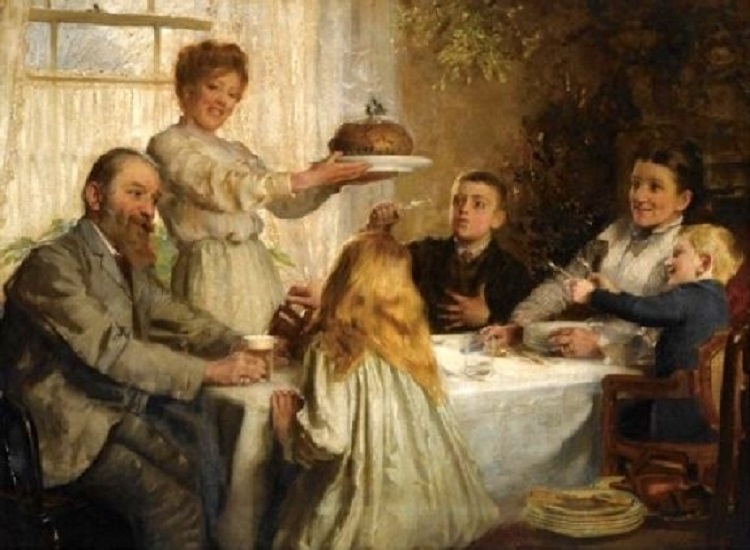 At the time when Acton was composing her cookbook, Christmas puddings were traditionally made four or five weeks before Christmas on ‘Stir-up Sunday’. The name, rather amusingly, comes from the collect in the Book of Common Prayer for that Sunday, which reads “Stir up, we beseech thee, O Lord, the wills of thy faithful people; that they, plenteously bringing forth good works, may by thee be plenteously required; through Jesus Christ our Lord”. Traditionally everyone in the household gave the pudding mixture a stir and made a wish whilst doing so. It was a common practice to include either a threepence or a sixpence in the pudding mixture which could be kept by the person who found it. For children this was a welcome piece of pocket money and for adults it was supposed to bring wealth in the coming year. Other common tokens included a tiny wishbone to bring good luck, a silver thimble for thrift, and an anchor to symbolize safe harbor.
Text only from the very entertaining blog Dance's Historical Miscellany
at 4:01 AM