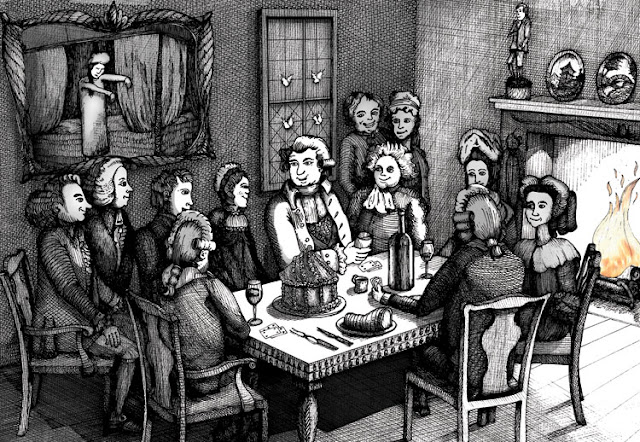 The early history of the Delaware Valley & William Penn’s inclusive policies created an ethnic & religious mix not found in the other twelve colonies.  Swedes, Germans, French Huguenots, & Welsh among others settled & celebrated their traditions.

Swedish settlement in the Delaware Valley preceded William Penn, & they remained an important part of the colony. They brought over their pre-Christmas festival of St. Lucia, its saffron bun (Lussekatter) & simple woven decorations. They also decorated with boughs of greens, made pretzels (praying hands) & several cookies that have become American traditions

There were several religious denominations, found in the middle colonies, which were opposed to the celebration, & continued to exclude themselves, among them the Quakers, Baptists, Presbyterians, & Congregationalists, at least at first. Eventually, the prosperity of Pennsylvania led even Quaker families to decorate their homes with greens & dine on the bounty of the colonies.

In 1734, Benjamin Franklin, in Poor Richard’s Almanac, placed between the dates of December 23-29: "If you wou'd have Guests merry with your Cheer / Be so yourself or so at least appear," & for the same time in 1739: "O blessed Season! lov'd by Saints & Sinners / For long Devotions, or for longer Dinners."

Like their English counterparts in the south, Anglicans, Roman Catholics, Lutherans, & Moravians celebrated the traditional Christmas season with both religious & secular observances in cities such as New York & Philadelphia, & the Middle Atlantic colonies of New York, Pennsylvania, & Maryland.

In 1749, Peter Kalm, a Swede visiting Philadelphia, noted in his diary that the Quakers completely dismissed the celebration of Christmas, writing: "Christmas Day. . . .The Quakers did not regard this day any more remarkable than other days. Stores were open, & anyone might sell or purchase what he wanted. . . .There was no more baking of bread for the Christmas festival than for other days; & no Christmas porridge on Christmas Eve! One did not seem to know what it meant to wish anyone a merry Christmas."

He also noted that at “first the Presbyterians did not care much for celebrating Christmas, but when they saw most of their members going to the English church on that day, they also started to have services."

Of Catholic Church he noted: "Nowhere was Christmas Day celebrated with more solemnity than in the Roman Church. Three sermons were preached there, & that which contributed most to the splendor of the ceremony was the beautiful music heard to-day. . . . Pews & altar were decorated with branches of mountain laurel, whose leaves are green in winter time & resemble the (cherry laurel)"

In the Anglican churches, lavender, rose petals, & pungent herbs such as rosemary & bay were scattered throughout the churches, providing a pleasant holiday scent. Scented flowers & herbs, chosen partially because they were aromatic, acted as an alternative form of incense. The Reverend George Herbert, an Anglican clergyman from Maryland, urged "that the church be swept, & kept clean without dust, or cobwebs, & at great festivals strewed, & stuck with boughs, & perfumed with incense."