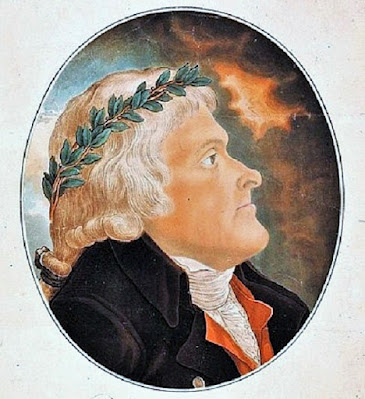 During the Christmas season, slaves at Monticello sometimes were allowed to visit family members from whom they had been separated by assignments to work at a different Jefferson  location. In 1808, Davy Hern traveled to Washington where his wife Fanny worked at Jefferson's President’s House to be with her for the holidays. Two days before the Christmas of 1813, Davy, Bartlet, Nace, & Eve set out for Jefferson's Poplar Forest possibly to visit relatives & friends but certainly to return with a few hogs for Monticello.

Christmas in the Enslaved Community at Monticello
(Primary Source References)
1790 December. (Nicholas Lewis, Monticello steward, accounts in Ledger 1767-1770). "To 2 1/2 Gallons Whiskey at Christmass for the Negroes."

1797 December 2. (Jefferson to Maria J. Eppes). "Tell Mr. Eppes that I have orders for a sufficient force to begin & finish his house during the winter after the Christmas holidays; so that his people may come safely after New year's day."

1808 November 17.' (Edmund Bacon to Thomas Jefferson). "Davy Has Petitioned for leave to come to see his wife at Christmass."

1808 November 22. (Jefferson to Edmund Bacon). "I approve of your permitting Davy to come [to Washington] at Christmas."

1810 August 17. (Jefferson to W. Chamberlayne). "I agreed to take them [hired slaves] at that price & they were to come to me after the Christmas Hollidays when their time with him was out."

1813 December 24. (Jefferson to Patrick Gibson). "We shall begin to send [flour] from hence immediately after the Christmas holidays."

1814 December 23. (Jefferson to Jeremiah Goodman, overseer). "Davy, Bartlet, Nace & Eve set out this morning for Poplar Forest. Let them start on their return with the hogs the day after your holidays end, which I suppose will be on Wednesday night [Dec. 28], so that they may set out Thursday morning."

1818 December 24. (Joel Yancey, Poplar Forest, to Jefferson). "Your two boys Dick & Moses arrived here on Monday night last [Dec. 21]. Both on horse back without a pass, but said they had your permission to visit their friends here this Xmass."

1821 December 27. (Mary Jefferson Randolph to Virginia Jefferson Randolph). "This Christmas has passed away hitherto as quietly as I wished & a great deal more so than I expected. I have not had a single application to write passes or done or seen any of the little disagreeable business that we generally have to do & except catching the sound of a fiddle yesterday on my way to the smokehouse & getting a glimpse of the fiddler as he stood with half closed eyes & head thrown back with one foot keeping time to his own scraping in the midst of a circle of attentive & admiring auditors I have not seen or heard any thing like Christmas gambols & what is yet more extraordinary have not ordered the death of a single turkey or helped to do execution on a solitary mince pie wo you see you lost nothing by being on the road this week."

This research is based on the work of Mindy Keyes Black, Monticello Department of Development & Public Affairs, November 1996; Updated November 2006 with text by Elizabeth Chew & Dianne Swann-Wright. For much more information, click this link.
at 4:00 AM