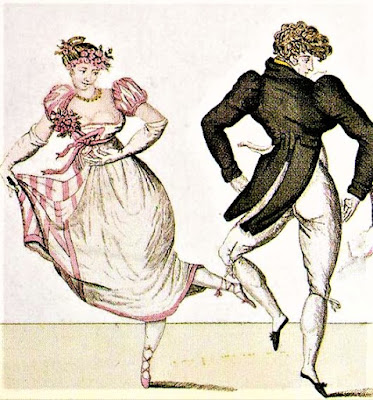 Harold Gill, a retired Colonial Williamsburg historian, tells us that colonial Virginians rarely wrote descriptions of Christmas observations, or, for that matter, any holiday celebrations. We look instead at the writings of visitors who found Virginia customs new or unusual. From their few comments about Christmas, it seems Virginians observed the occasion with balls, parties, visits, & good food. Thomas Jefferson wrote December 25, 1762, that Christmas was a “day of greatest mirth & jollity.”

Nicholas Cresswell, an Englishman who spent years in Virginia & kept a journal, wrote while in Alexandria on December 25, 1774: “Christmas Day but little regarded here.”

Cresswell did, however, attend a ball on Twelfth Night:  There was about 37 Ladys Dressed & Powdered to the like, some of them very handsom, & as much Vanity as is necessary. All of them fond of Dancing. But I do not think they perform it with the greatest elleganse. Betwixt the Country Dances they have What I call everlasting Jiggs.

"A Couple gets up, & begins to dance a Jig (to some Negro tune) others comes & cuts them out, these dances allways last as long as the Fiddler can play. This is social but I think it looks more like a Bacchanalian dance then one in a polite Assembly.

Old Women, Young Wifes with young Children on the Laps, Widows, Maids, & Girls come promsciously to these Assemblys which generally continue til morning. A Cold supper, Punch, Wine, Coffee, & Chocolate, But no Tea. This is a forbidden herb. The men chiefly Scotch & Irish. I went home about Two Oclock, but part of the Company stayd got Drunk & had a fight."

The Encyclopedia of Virginia by the Virginia Humanities Council notes that “Country” dances were the prevailing social styleat Virginia dances at this time.. A manual containing the most famous series of country dances, John Playford’s The English Dancing Master (later simply The Dancing Master), was published in London. Over eighteen editions, published from 1651 to 1728, the book collected more than one thousand distinct dances, both steps & music. These dances were often written to accommodate “as many as will” & were performed in two long lines, partners facing one another in what was called a longways set. Unlike the minuet, country dances did not reinforce the established social hierarchy—in fact, they were democratic. They were “progressive” dances, meaning that the dancers moved up & down the long lines & danced with every other couple. Dancers embellished with elaborate steps as they knew them. The different skill levels within country dancing allowed it to be a widespread pastime among the gentry and, increasingly as the century progressed, among the “middling sort.”

The most loosely structured dances were jigs & reels, the first derived from the traditions of African slaves & the second from those of the Scots. Jigs involved two dancers at a time, while reels were more flexible, accommodating 3 to 6 participants, depending on the style. Both dances were regular features of “Virginia hops,” informal dancing parties frequented by lower-class whites or slaves that featured a fiddler responding to the whims of the crowd. Landon Carter‘s daughter Lucy Carter attended a hop at a tavern in 1772. Such gatherings seem to have been a Virginia tradition, and, even when held in other colonies, featured dances particularly associated with Virginia. Jigs & reels also infiltrated formal events. Nicholas Cresswell, an Englishman visiting Alexandria in 1775, described one such event in his journal. He dubbed jigs “everlasting” because fresh dancers frequently cut in to continue the dance until the musician was exhausted.

The following Christmas, Cresswell was in Frederick County where he noted “Christmas Day but little observed in this Country except it is amongst the Dutch.”

Philip Vickers Fithian of New Jersey, tutor to the Carter family of Nomini Hall in Virginia, recorded his first Virginia Christmas experience December 18, 1773: “Nothing is now to be heard of in conversation, but the Balls, the Fox-hunts, the fine entertainments, & the good fellowship, which are to be exhibited at the approaching Christmas. I almost think myself happy that my Horses lameness will be sufficient Excuse for my keeping at home on these Holidays.” On Christmas, Fithian noted that “Guns are fired this Evening in the Neighbourhood, & the Negroes seem to be inspired with new Life.”

Christmas day was spent quietly, but Fithian said he “was waked this morning by Guns fired all round the House.” He gave slightly more than 3 shillings to the servants for a “Christmas Box, as they call it.” He thought the dinner was “no otherwise than common, yet as elegant a Christmas Dinner as I ever sat Down to.” On December 29th Fithian reopened his school after a five-day holiday, & he recorded that they had a large pie “to signify the Conclusion of the Holidays.”

Gifts were usually given to children & servants. Jefferson recorded in his 1779 account book that at Christmas he spent 48 shillings for Christmas presents. Some advertisements in colonial newspapers offered toys for Christmas treats for children.

Christmas was observed in most southern colonies in much the same way. William Stephens described the holidays in Savannah in 1742. He wrote: "How irregular so ever we may be in many things, very few were to be found who payd no regard to Xmas Holy days, & it was a slight which would ill please our Adversaries, had they seen what a number of hail young Fellows were got together this day, in, & about the Town, at Crickett, & such kinds of Exercise, nor did I hear of any disorders there guilty of over their Cups in the Evening."

In 1805, when James Iredell of North Carolina was attending college at Princeton, he was surprised to learn not everyone observed Christmas. He wrote that Christmas, at home “welcomed with so many demonstrations of joy, is here regarded almost with perfect indifference & passed over as but little more than an ordinary day.”

The Virginia observation of Christmas tended towards good fellowship & good eating. The Virginia Almanac for 1772 carried these sentiments on a December page: "This Month much Meat will be roasted in rich Mens Kitchens, the Cooks sweating in making of minced Pies & other Christmas Cheer, & whole Rivers of Punch, Toddy, Wine, Beer, & Cider consumed with drinking. Cards & Dice will be greatly used, to drive away the Tediousness of the long cold Nights; & much Money will be lost at Whist Cribbage & All fours."

In 1772, the Virginia Gazette published a letter from “An Old Fellow,” who lived in England. He complained about the “Decay of English Customs & Manners.” After describing the old English Christmas when the kitchen was “the Palace of Plenty, Jollity, & good Eating,” he wrote: "Now mark the Picture of the present Time: Instead of that firm Roast Beef, that fragrant Pudding, our Tables groan with the Luxuries of France & India. Here a lean Fricassee rises in the Room of our majestick Ribs, & there a Scoundrel Syllabub occupies the Place of our well-beloved Home-brewed. The solid Meal gives Way to the slight Repast; and, forgetting that good Eating & good Porter are two great Supporters of Magna Charta & the British Constitution, we open our Hearts & our Mouths to new Fashions in Cookery, which will one Day lead us to Ruin." The “Old Fellow” should have come to Virginia.