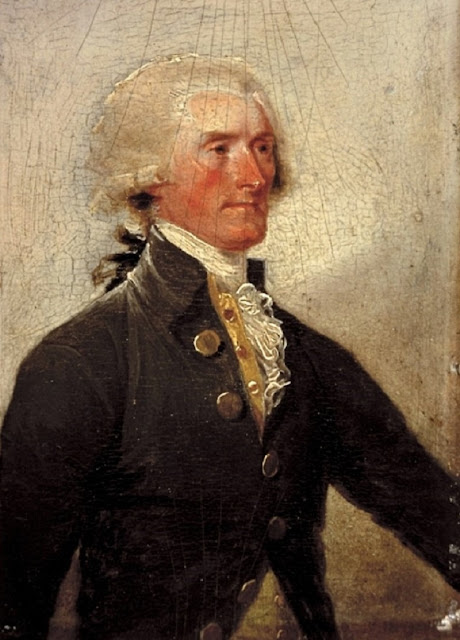 Thomas Jefferson was not always jolly at Christmas. Jefferson wrote to John Page on December 25, 1762, "This very day, to others the day of greatest mirth and jollity, sees me overwhelmed with more and greater misfortunes then have befallen a descendant of Adam for these thousand years past I am sure; and perhaps, after exception Job, since the creation of the world."

Jefferson did note the joy of his grandchildren. On Christmas Day 1809, he said of 8-year-old grandson Francis Wayles Eppes: "He is at this moment running about with his cousins bawling out 'a merry christmas' 'a christmas gift' Etc."

And he did seem to enjoy a Christmas Mince pie.  "I will take the liberty of sending for some barrels of apples, & if a basket of them can now be sent by the bearer they will be acceptable as accomodated to the season of mince pies." 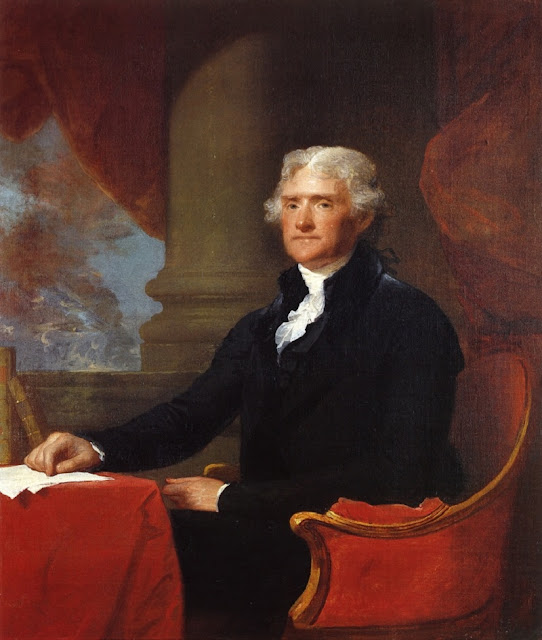 1762 December 25. (Jefferson to John Page). "This very day, to others the day of greatest mirth & jollity, sees me overwhelmed with more & greater misfortunes then have befallen a descendant of Adam for these thousand years past I am sure; & perhaps, after exception Job, since the creation of the world."

1791 January 22. (Maria Jefferson to Jefferson). "Last Christmas I gave sister the 'Tales of the Castle' & she made me a present of the 'Observer' a little ivory box, & one of her drawings; & to Jenny she gave 'Paradise Lost' & some other things."

1796 January 1. (Martha Jefferson Randolph to Jefferson). "We have spent hollidays & indeed every day in such a perpetual round of visiting & receiving visits that I have not had a moment to my self since I came down."

1799 January 19. (Thomas Mann Randolph to Jefferson). "We remained at Monticello after you left us till Christmas day in which we paid a visit to George Divers with as many as we could carry, Virginia, Nancy & Ellen--We passed the Christmas with Divers, P. Carr, & Mrs. Trist, assisted at a ball in Charlottesville on the first day of the year & returned on the 4th. to Monticello where we found our children (whom I had not neglected to visit) in the most florid health."

1808 December 19. (Jefferson to Thomas Jefferson Randolph). "Will there be such an intermission of your lectures about Christmas as that you can come & pass a few days here [Washington D.C.]"

1808 December 20. (Jefferson to Ellen Wayles Randolph). "I have written to Jefferson [Thomas Jefferson Randolph] if there is sufficient intermission in his lectures at Christmas, to come & pass his free interval with us."

1809 December 25. (Jefferson to John Wayles Eppes). "He [Francis Wayles Eppes] is at this moment running about with his cousins bawling out 'a merry christmas' 'a christmas gift &c...With the compliments of the season accept assurances of my constant affection & respect."

1809 December 29. (Jefferson to Anne Bankhead). "Mr. Bankhead I suppose is seeking a Merry Christmas in all the wit & merriments of Coke Littleton."

1809 December 30. (Jefferson to Thomas Jefferson Randolph). "But I presume you have lately seen them [family members] as it was understood you meant to pass your Christmas with them."

1810 December 14. (John Wayles Eppes to Jefferson). "When I parted with Francis I promised either to call for him or send for him at Christmas."

1813 December 25. (Jefferson to Mary Walker Lewis). "I will take the liberty of sending for some barrels of apples, & if a basket of them can now be sent by the bearer they will be acceptable as accomodated to the season of mince pies."

1815 August 5. (Jefferson to William Wirt). "You ask some account of Mr. [Patrick] Henry's mind, information & manners in 1759-60, when I first became acquainted with him. We met at Nathanl. Dandridge's, in Hanover, about the Christmas of that winter, & passed perhaps a fortnight together at the revelries of the neighborhood & season."

1817 December 18. (Jefferson to Joseph Cabell). "I have been detained a month by may affairs here [Popular Forest] but shall depart in three days & eat my Christmas dinner at Monticello."

1819 January 1. (John Wayles Eppes to Francis Wayles Eppes). "The old mode of keeping Christmas seems to be going generally out of fashion. It has changed very much since my recollection. Formerly all classes of society kept it as a kind of feast. It is now merely kept by labouring people. All other classes of society resume their accustomed occupations, after Christmas day. Perhaps no period for mirth & relaxation can with greater propriety be chosen by have ceased & before commencing the new year they devote to mirth & relaxation a few days at the close of the year."
This article is based on the research of Mindy Keyes Black, Monticello Department of Development & Public Affairs, November 1996; Updated November 2006 with text by Elizabeth Chew & Dianne Swann-Wright. For much more information, click this link.