Wassail - even Benjamin Franklin had a favorite Christmas Punch Recipe 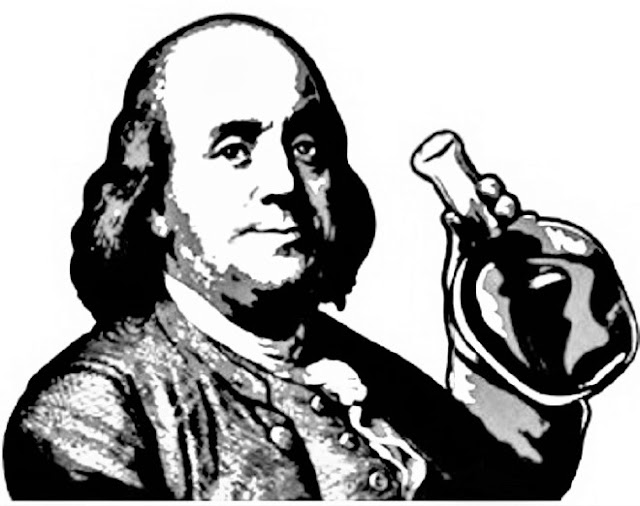 In the British American colonies, even Benjamin Franklin had a favorite punch recipe. Franklin included the recipe in a letter to his friend James Bowdoin, on October 11, 1763. "To make Milk Punch. Take 6 quarts of Brandy, and the Rinds of 44 Lemons pared very thin; Steep the Rinds in Brandy 24 Hours, then strain it off. Put to it 4 Quarts of Water, 4 Large Nutmegs grated, 2 Quarts of Lemon Juice, 2 pounds of double refined Sugar. When the Sugar is dissolv’d boil 3 Quarts of Milk and put to the rest hot as you take it off the Fire, and stir it about. Let it stand 2 Hours; then run it thro’ a Jelly-bag til it is clear; then bottle it off."

Wassailing is a Christmas tradition that has been practiced in Britain for centuries. It has its roots in a wintertime pagan custom of visiting orchards to sing to the trees & spirits in the hope of ensuring a good harvest the following season. During the orchard visit, a communal wassail bowl – filled with a warm spiced cider, perry or ale – would be shared amongst revelers.

The carol "The Twelve Days of Christmas" & Shakespeare’s "Twelfth Night" offer clues to some of the ways people celebrated Christmas in the past. Advent, a time of fasting, was observed from the 1st to the 24th of December. Christmas would then last 12 days, ending with lots of feasting & drinking  on the 5th of January – the eve of Epiphany in the Christian calendar – with wassailing a key part of the celebrations.

The word Wassail expanded from being a greeting to be a term used to refer to the punch drink related to the toast. Party-goers typically visited local orchards & fruit trees, sang songs, raised a ruckus (often by banging pots & pans.

The word "wassail" is thought to be derived from the Old English "was hál", meaning "be hale" or "good health." Clebrants were wishing both the trees & their owners Good Health. Visitors were often rewarded by the orchard’s grateful owner with some form of warm, spiced alcoholic beverage from a communal "wassail" bowl or cup. Sometimes a topping of one of the longed-for apple, known as "lamb's wool," would be added.

Early Wassail reportedly resembled the ancient Roman drink hypocras, which survived into the early Middle Ages as a libation for the wealthy. The necessity of importing the wine plus ginger, cinnamon, cloves, allspice, and nutmeg from outside England made it costly. 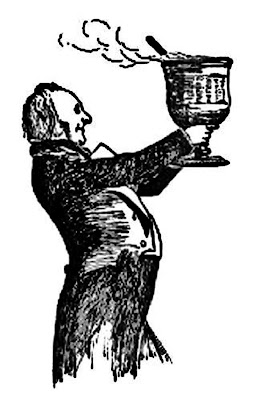 When ales & cider replaced the wine, more people could afford it, and recipes varied according to the means of each family. Though usually prepared for immediate consumption, wassail sometimes was bottled to ferment.

The Wassail Bowl was sometimes composed of ale instead of wine - with nutmeg, sugar, toast, ginger, and roasted crabs ; in this way the nut-brown beverage is still prepared in some old families, and round the hearths of substantial farmers at Christmas. It is also called Lambs Wool, and is celebrated by Herrick in his “Twelfth Night:”
“Next crowne the bowle full
With gentle Lambs Wool,
Add sugar, nutmeg, and ginger,
With store of ale too ;
And thus ye must doe
To make the Wassaile a swinger.”

In Lamb's Wool, ale or dark beer was whipped to form a surface froth in which floated roasted crab apples. The hissing pulp bursting from them resembled wool. Shakespeare alluded to Lamb's Wool in Midsummer Night's Dream:
Sometimes lurk I in the gossip's bowl
In very likeness of a roasted crab
And when she drinks, against her lips I bob,
And down her withered dewlap pours the ale.
Likewise in Love's Labour's Lost:
When all aloud the wind doth blow
And coughing drowns the parson's saw
And birds sit brooding in the snow
And Marian's nose looks red and raw,
When roasted crabs hiss in the bowl,
Then nightly sings the staring owl, Tu-whit,
Tu-who—a merry note,
While greasy Joan doth keel the pot. 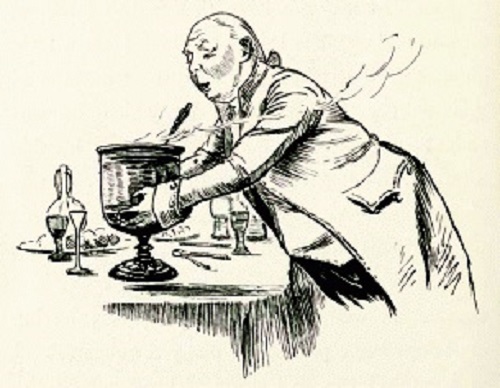 Some report that at the bottom of some Wassail bowls was a crust of bread, that particular drink was offered to the most important person in the room & then passed around. This was the origin of a "toast" which survives to this day as part of the drinking ritual.