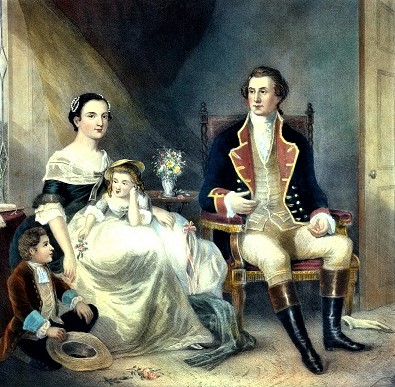 The Colonial Williamsburg website notes that  George Washington's Christmas list for his young stepchildren was ambitious: in 1759, when Washington gave the following presents to his new wife's young children: "a bird on Bellows; a Cuckoo; a Turnabout Parrot; a Grocers Shop; an Aviary; a Prussian Dragoon; a Man Smoking; a Tunbridge Tea Set; 3 Neat Books, a Tea Chest. A straw parchment box with a glass & a neat dress'd wax baby."

At the time they married, Martha Dandridge Custis was only 27 years old, owned nearly 300 enslaved people, & had more than 17,500 acres of land— worth more than £40,000. At the end of 1758, Washington resigned his military commission. On January 6, 1759, Martha Dandridge Custis married George Washington at her home, White House, in New Kent County.

John Parke Custis, known as "Jacky" when younger & "Jack" as he got older, was around 4 years old, when his mother Martha married George Washington. As a result, George Washington became Jacky's legal guardian. On February 3, 1774, Custis & Eleanor Calvert, the fifteen-year-old daughter of a prominent Maryland family. were married. Jack & Nelly lived at Abingdon Plantation & had 7 children, 4 of whom would survive, over the next 7 years. On November 5, 1781, just weeks before he turned 27, John Parke Custis, Martha’s sole remaining child, contracted a fever & died.

Martha Parke Custis was Martha Washington & Daniel Parke Custis's youngest child. Known to the family as Patsy, she was only a toddler, when her mother married George Washington. By the time Patsy was 11 or 12, she was plagued with seizures, which grew worse over time. After a particularly violent episode on June 19, 1773, Patsy died at age 17. In his diary, George Washington wrote simply on June 19th, 1773: "At home all day. About 5 oclock poor Patcy Custis Died Suddenly." In a letter to his brother-in-law written the following day, George Washington relayed the news that Patsy, described as his "Sweet Innocent Girl," had been buried earlier in the day & that the situation had "almost reduced my poor Wife to the lowest ebb of Misery."