Thanksgiving has passed, Time to Think about Greenery & other Christmas Traditions

Here in Maryland, families begin searching for their Christmas greenery after Thanksgiving.  Long before the advent of Christianity, plants & trees that remained green all year had a special meaning for people in the winter. In many countries folks believed that evergreens would keep away witches, ghosts, evil spirits, & illness. 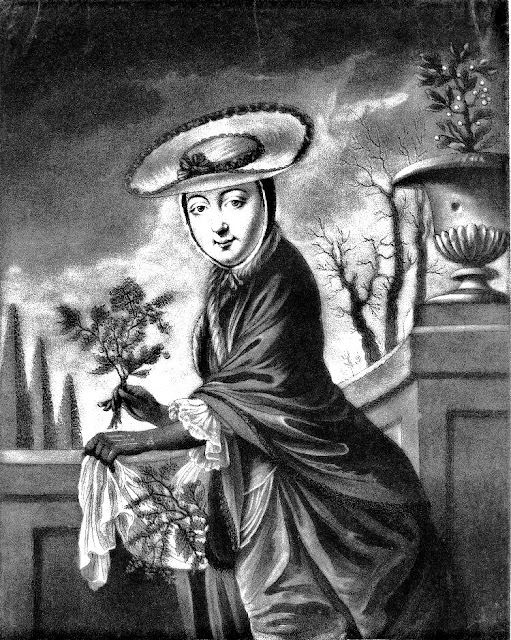 In the Northern hemisphere, many ancient people believed that the sun was a god & that winter came every year because the sun god had grown weak. They celebrated the solstice, because it meant that at last the sun god would begin to get well. Evergreen boughs reminded them of all the green plants that would grow again when the sun god was strong & summer would return. 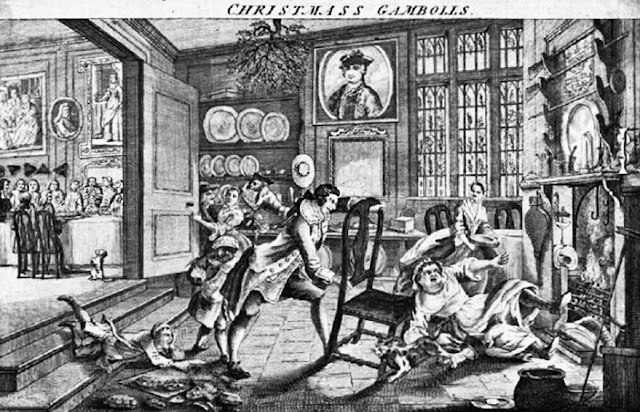 Springs of holly or ivy at the windows & mistletoe above.  1770s Christmas gambolls, mid-18th century, etching published by P. Griffin

The ancient Egyptians worshipped a god called Ra, who had the head of a hawk & wore the sun as a blazing disk in his crown. At the solstice, when Ra began to recover from his weakness, the Egyptians filled their homes with green palm rushes symbolizing the triumph of life over death. 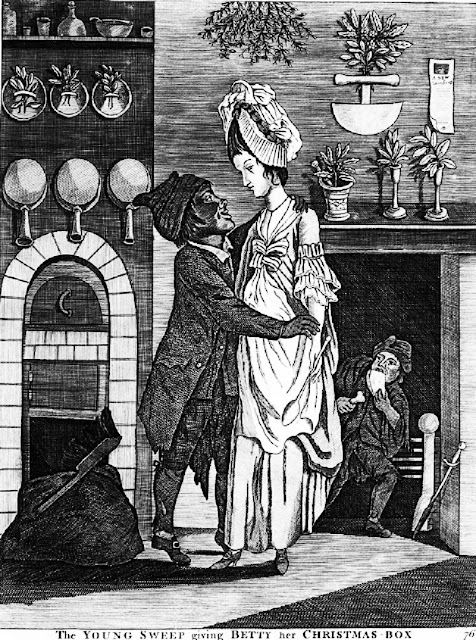 Greens decorate the room with mistletoe hanging from above.  The Young Sweep giving Betty her Christmas Box, 1770-1780

Early Romans marked the solstice with a feast called the Saturnalia in honor of Saturn, the god of agriculture. To mark the occasion, they decorated their homes & temples with evergreen boughs. 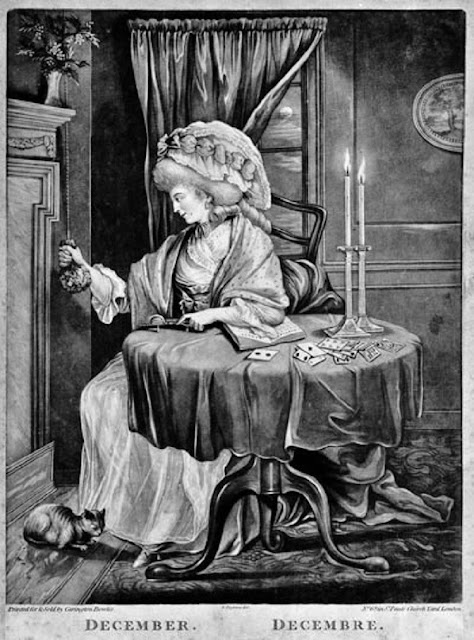 Holly on the mantel Published by  Carrington Bowles in 1780.

In Northern Europe the Druids, the priests of the ancient Celts, also decorated their temples with evergreen boughs as a symbol of everlasting life. The fierce Vikings in Scandinavia thought that evergreens were the special plant of the sun god, Balder. 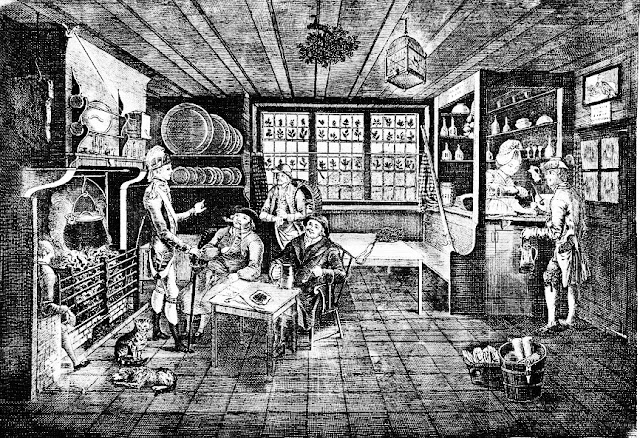 Sprigs of ivy in the windows & mistletoe above.  Settling the Affairs of the Nation, pub by London's Bowles & Carver c 1775.

Decorating one’s house with natural boughs has been a Christmas tradition since Celtic times in England. Boughs of holly with their bright red berries were especially coveted. 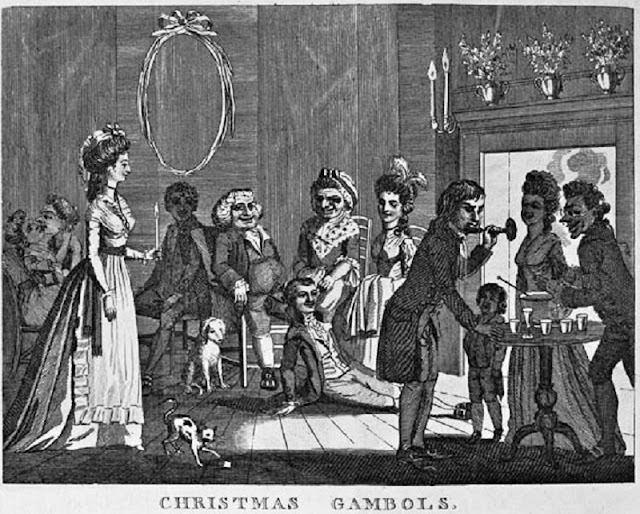 Sprigs of holly over the mantle. Christmas Gambols The Wit’s Magazine, London, December 1784

"Heigh ho! sing heigh ho! unto the green holly:
Most friendship is feigning, most loving mere folly:
Then, heigh ho, the holly!
This life is most jolly.”
- William Shakespeare, As You Like It 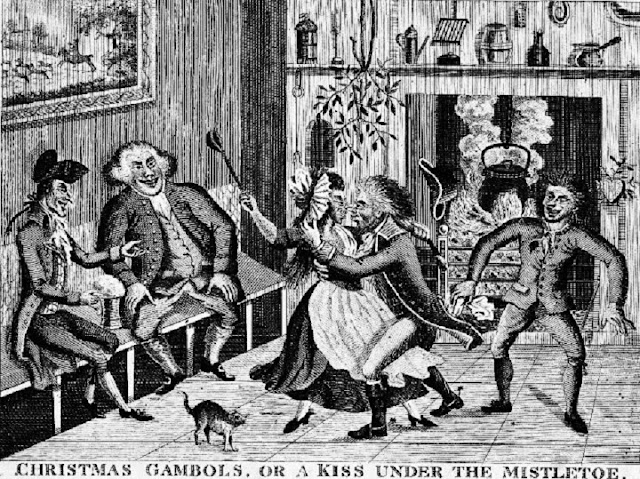 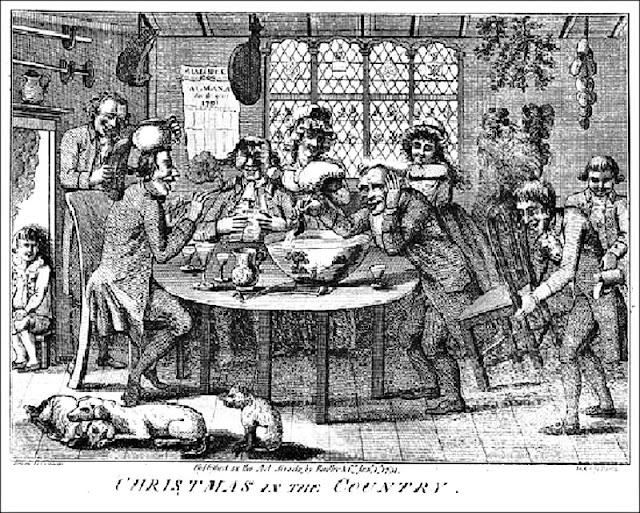 Mistletoe hangs above & sprigs of holly or ivy decorate the lower window panes.  1791 Christmas in the Country, from drawing by Samuel Collings and pub Bentley & Co. in London, January 1, 1791. 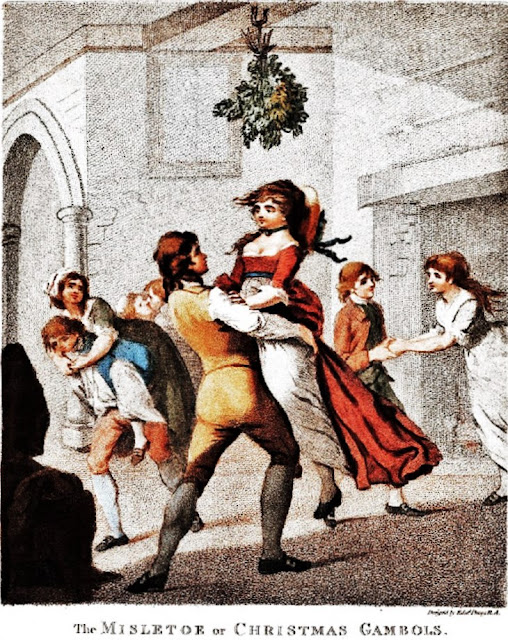 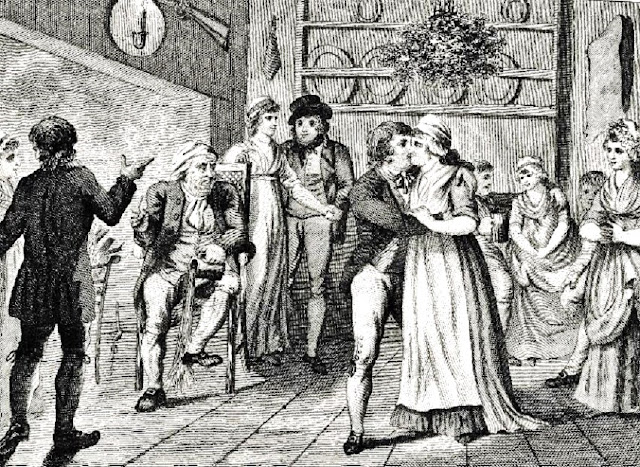 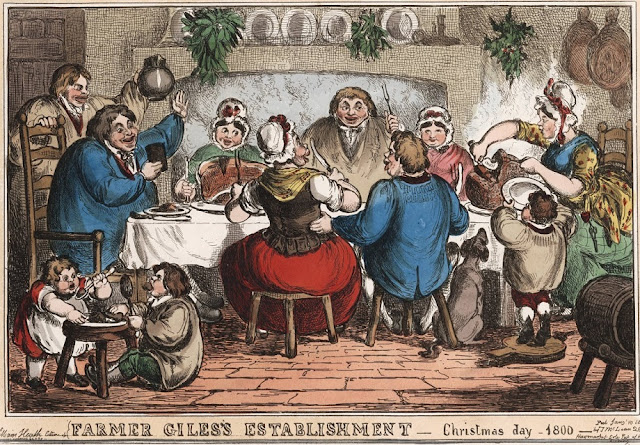 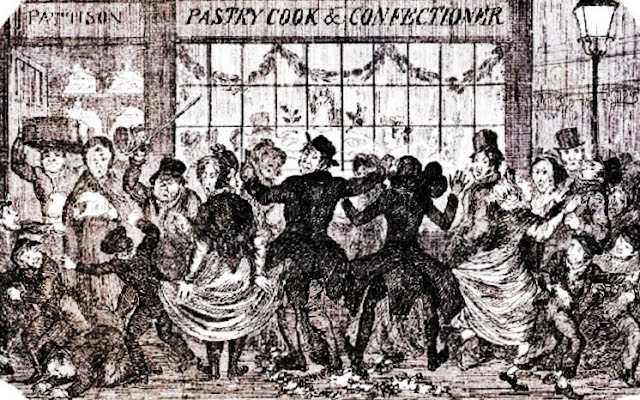 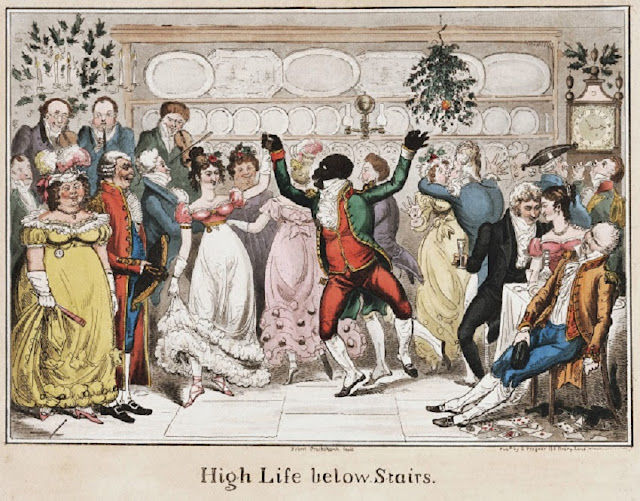 Swags of Greenery decorate the windows of the Pastry Shop for 12th night.  The Every-day Book, 1827, Naughty Boys 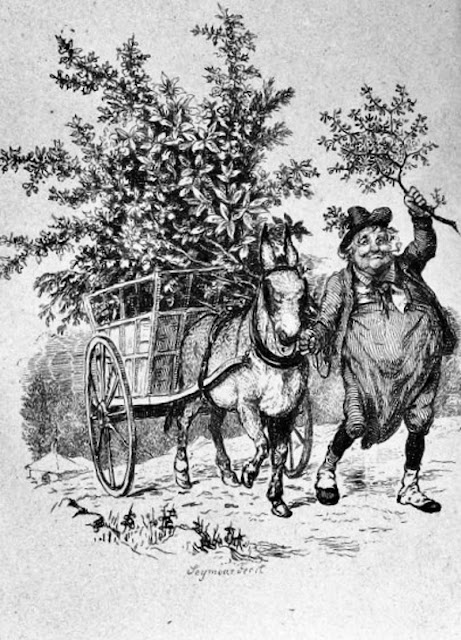 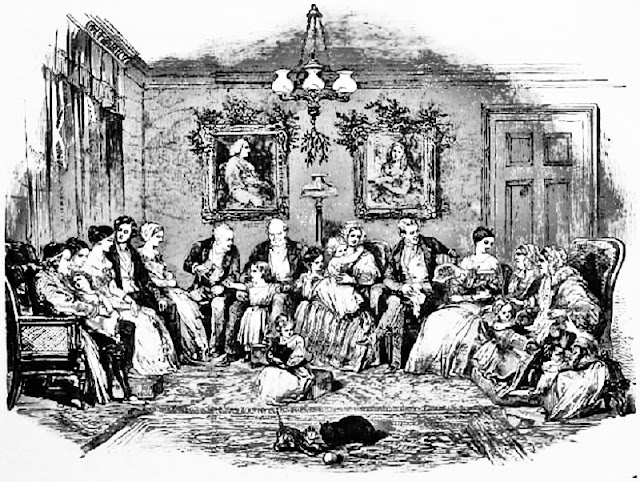 Greenery decorates the old family portraits and hangs from the chandelier.  1847 Christmas at home with family & cats  Illustrated London News 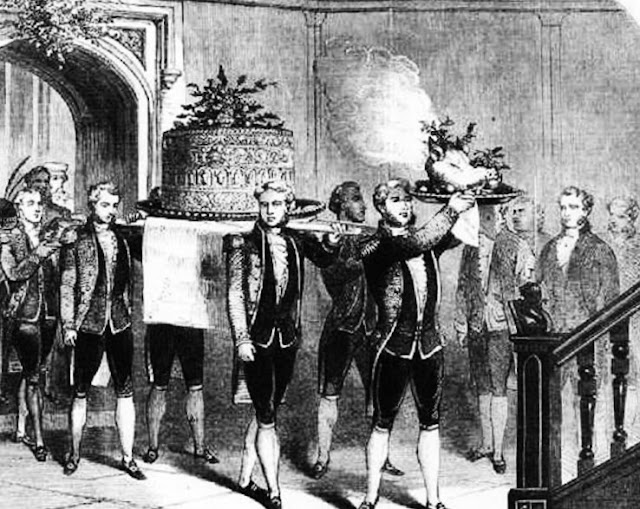 Greens decorate the archway, the cake, and the boar's head!  The Illustrated Times 1857 - The Boar’s Head and Christmas Pie for the  Royal Banquet at Windsor Castle 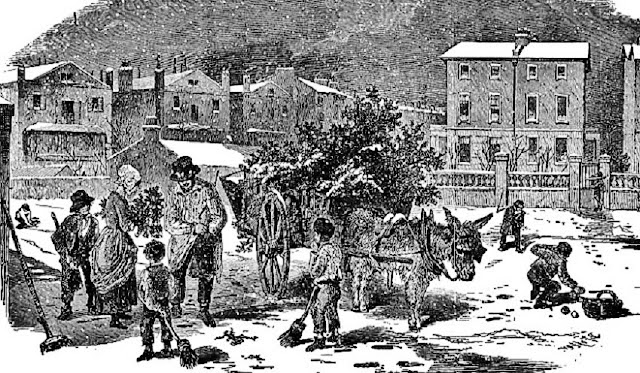 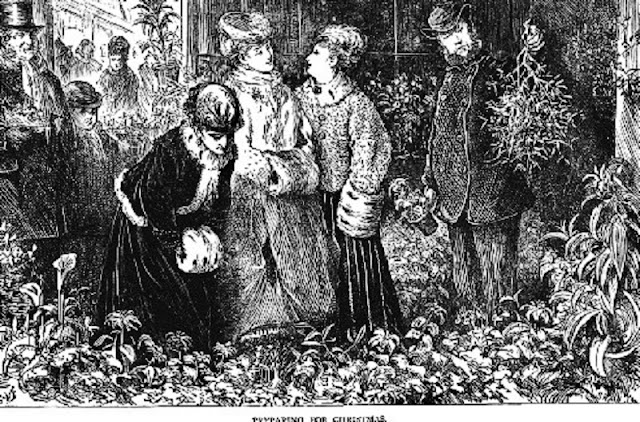 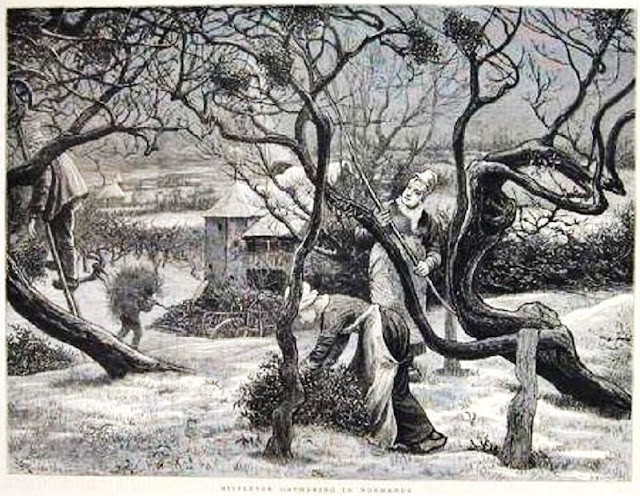 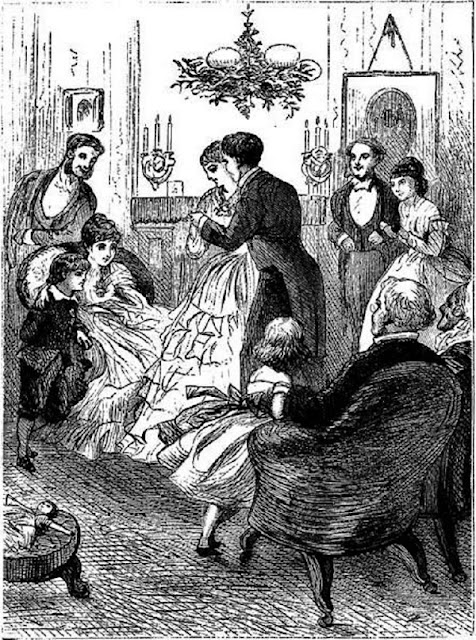 Kissing under the Mistletoe 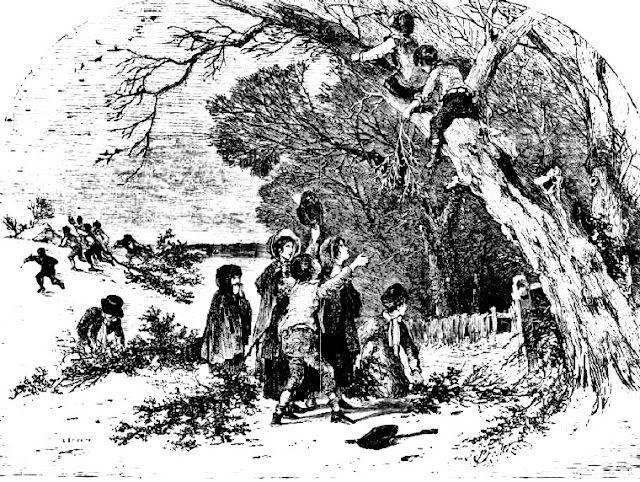 Gathering Mistletoe
at 4:00 AM